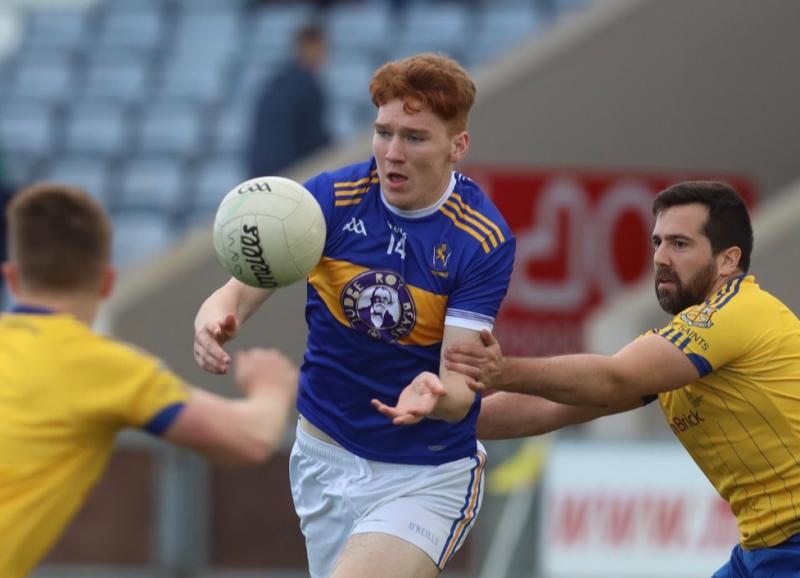 O’Dempsey’s continued to build on the momentum their Seniors showed in their victory over Emo, as their second team took to the field in Ratheniska and fired five goals en-route to defeating Portlaoise’s second string.

With Eoin Finlay and Robbie McNeil combining to score 4-9 between them up front, as well as Daniel McCormack completely dominating the skies in midfield, O’Dempsey’s had far too much for Portlaoise.

O’Dempsey’s swiftly pointed the first two scores through their full forward Eoin Finlay, whom Portlaoise just couldn’t get a hand on all evening. Portlaoise responded well though, with Ben Brennan making a run up the field to fire in a goal to get ‘The Town’ right back into the thick of it.

O’Dempsey’s appeared unfazed by that goal though, as they kicked five points on the trot before getting in for a goal themselves before the first water break was whistled for. Eoin Finlay, Darren Fitzpatrick, Eugene Nolan and Darran Finlay all raised white flags for Adrian Dunne’s side, before Robbie McNeil found the back of the net.

The momentum didn’t swing after the break in play either, as O’Dempsey’s looked like they had put the game to bed before half-time. Eoin Finlay fired in a second goal for the Killenard men, but to Portlaoise’s credit, they did respond down the other end to keep the gap somewhat close.

Wing-forward Kyle Enright’s rocket of a shot found the bottom left corner, leaving David Nicholson in the O’Dempsey’s net no chance. O’Dempsey’s continued to take their points well though, with Eoin Finlay to the forefront with another couple of points.

Portlaoise grabbed their first point through midfielder Ben Brennan, who curled over a beauty, before Jason Maher added another. However, O’Dempsey’s two main men in the forward line, Eoin Finlay and Robbie McNeil linked up brilliantly, as McNeil played a give and go with Finlay before palming to the net.

O’Dempsey’s buried goal number four from the next kick-out as well, as Sam Molloy beat his marker near the end line before unselfishly picking out Darran Finlay who was on hand to convert another.

Portlaoise did make a better fist of it in Ratheniska during the second half, as O’Dempsey’s took their foot off the gas somewhat. Points from Jason Maher and Liam Og Brennan were followed by Portlaoise’s third goal.

Full-forward Liam Og Brennan had his first two shots spectacularly saved by O’Dempsey’s keeper David Nicholson, but Liam Og Brennan managed to get it into the back of the net at the third time of asking despite O’Dempsey’s corner-back Eoghan Fitzpatrick nearly keeping it out.

O’Dempsey’s kept ticking over, with Sam Molloy, Robbie McNeil, and Eugene Noland landing points for them before the second water break was called for. The score was 4-13 to 3-5 in favour of O’Dempsey’s.

Peter Naughton and Jason Maher scored points for Portlaoise in the last quarter of the match, but McNeil rounded proceedings off with his hat-trick goal, after he pounced for the rebounded effort.