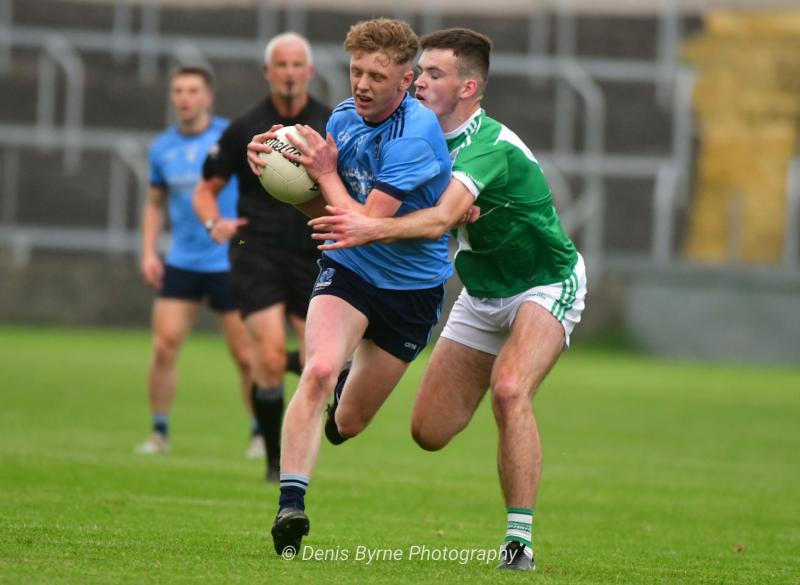 Ballyroan-Abbey sent out a strong message on Saturday night after a superb display saw them account for a disappointing Killeshin. Diarmuid Whelan was immense in the middle of the field and led his charges while the evergreen Padraig McMahon and the towering figure of Cathal Doyle also powered on the winners.

It was a game they never looked like losing and once they hit the net in the 27th minute, you sensed it would be a long road back for Killeshin who had Eoin Scully black carded in the second half and saw Mark Dermott sent off a few minutes from time for picking up a black card having already ha a yellow card earlier in the game.

The opening score of the game was almost a goal for the Killeshin men. David Aston broke through but Ballyroan keeper Paudi McDonald make an excellent save in a real let off for him and his colleagues.

Ballyroan eventually opened the scoring after five minutes through a Brian Whelan free before Padraig McDonald kicked over an excellent mark to double their advantage.

Ross Bolger and Evan Lowry hit back for Killeshin's to make it a draw game on 12 minutes but Ballyroan looked slicker and began to pull away. Shaun Fitzpatrick and Brian Whelan raised white flags to put them 0-4 to 0-2 ahead at the water break.

Killian Roche brought it back to a one point game shortly after that before a Brian Whelan free and a second of the game for Padraig McDonald pulled Ballyroan 0-6 to 0-3 in front.

They furthered that on 27 minutes as Charlie Whelan found the net as he reacted quickest to the rebound following Diarmuid Whelan's shot coming off the crossbar.

Two quickfire points from Charlie Whelan and Brian Whelan followed and suddenly, Ballyroan found themselves 1-8 to 0-4 ahead on 28 minutes.

Evan Lowry added his second of the day before the break but Ballyroan went in with a comfortable six point lead.

A six point lead soon increased after the half time break as things went from bad to worse for Killeshin. Cathal Doyle blazed over from close range to push the gap out to seven before Eoin Scully was shown a black card for Killeshin for pulling down Brian Whelan on route to goal. Charlie Whelan tapped over the free before Padraig McMahon and Brian Whelan furthered their tallies.

Killeshin keeper Killian Roche floated over a free to keep them in touch but by the second water break Ballyroan looked home and dry leading 1-14 to 0-7.

Eoin Lowry did strike a goal 10 minutes from time to give Killeshin hope but with the outstanding Diarmuid Whelan kicking some glorious points, Ballyroan stretched out their lead. His left footed effort on 57 minutes was the pick of his scores and it put them 1-18 to 1-9 in front.

Killeshin did have a few decent goal chances at the death but Ross Bolger and Eoin Lowry both blazed over while a point from Evan Lowry made it a 1-18 to 1-12 game in injury time.