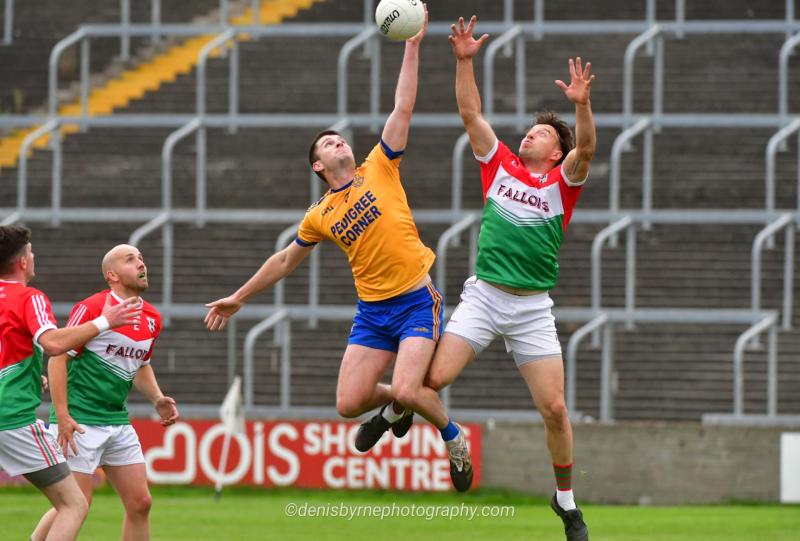 St Joseph’s battled to a hard-fought victory over Clonaslee St Manman’s in their SFC Round 1 game on Sunday evening in O’Moore Park.

Despite just two points separating the teams heading into the last ten minutes, it was St Joseph’s who found an extra gear to claim the victory.

Clonaslee had made the brighter start to the game, winning possession from the throw-in and going straight at the St Joseph’s defence. Some quick hands ended up working the ball back to Niall Corbet 40 yards out and he launched a ball between the posts for the opening score.

Corbet then doubled his and Clonaslee’s tally soon after with a free before they were denied a goal. Liam Senior was played through on goal with a deft pass and his shot was brilliantly turned away by Aaron Cooney in the St Joseph’s goal.

The Kellyville outfit finally opened their account in the ninth minute when James Kelly floated over a 45, but Jack Owens cancelled that out soon after with a superb point from play.

The opening goal of the game arrived after that with St Joseph’s the scorers, and they had the good work of youngster Oisín Hooney to thank. He looked to be bottled up in the right corner but his trickery and perseverance allowed him to advance on goal, his pass across the penalty area met by Dylan Doyle who fisted to the net.

Adam Campion added a point moments later from the left wing and St Joseph’s were now two up, having been two behind just three minutes earlier.

Clonaslee did manage to get a point back before the water break though as Niall Corbet stroked over a free, leaving it 1-2 to 0-4.

When play resumed Clonaslee quickly drew level thanks to Diarmuid Conroy, but two in a row for Joseph’s from Matthew Campion and James Kelly (free) kept them ahead.

They couldn’t pull away though and Clonaslee were showing well for a side back in the senior ranks. James McRedmond managed to squeeze a shot between the posts from a tight angle and then Josh Lacey and Corbet (free) traded points to leave just one in it at the break, St Joseph’s leading 1-5 to 0-7 at the changeover.

The third quarter of the game was a low-scoring affair with neither side really managing to get on top. Bob Downey had a sight at goal for Clonaslee but his shot was brilliantly blocked on the line by Jame Kelly.

We had to wait for the eighth minute of the half for the first score and it went to St Joseph’s, as Josh O’Brien landed a free from about 30 yards out.

Niall Corbet provided the respone for Clonaslee when he cut in from the left wing to point as the game remained on a knife edge. Brian Daly thought he had given his side the advantage when he burst through on goal and, despite being off balance, getting a shot away, only to see it hit the post and rebound to safety.

Dylan Doyle did manage to get a point for St Joseph’s though, which left them 1-7 to 0-8 ahead at the second water break.

It wasn’t for lack of effort, but St Joseph’s just had too much for them in this period. It started with a point from sub Seamus Farrelly, and then a well-worked team move ended with James Kelly thundering a shot to the roof of the net.

He added a 45 moments later and in the final minute, Brian Daly drilled a shot between the posts from distance to wrap up a hard-fought victory for Mick Dempsey’s charges.