Portlaoise Leinster dream comes to an end despite heroic display 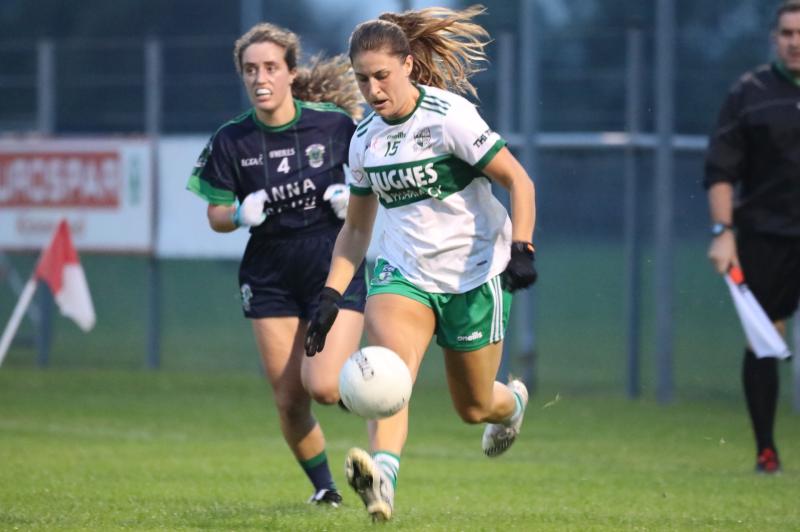 Portlaoise were left crestfallen in Kinnegad on Wednesday night after their dreams of winning a Leinster club title were dashed by a star studded Foxrock Cabinteely side.

Portlaoise were extremely competitive but it wasn’t their night as Foxrock Cabinteely had the likes of Dublin seniors Sinead Goldrick and Niamh Collins and Westmeath Captain Fiona Claffey to bring in off the bench.

Both sides had a couple of half chances in the early stages but it was the Portlaoise women who got the early boost. With four minutes on the clock, centre forward Aisling Kehoe won a ball that she had no right to win, fed Shaunagh Jackson who in turn put Alison Taylor through on a foot race with the Foxrock Cabinteely keeper.

Taylor won the race and got the deftest of touches for the ball to creep over the line and into the net.

Foxrock Cabinteely had plenty of possession early on but as they racked up the wides, Portlaoise were being patient and making the most of their opportunities.

Aisling Kehoe added a super point on 12 minutes to stretch their lead. It remained 1-1 to 0-0 at the opening water break but Foxrock Cabinteely had the luxury of springing Dublin player Sinead Goldrick off the bench before the resumption of the second quarter.

Her impact was immediate and within a minute of the restart she played a leading hand in setting up Niamh Ryan for their opening score.

While it might have been a low scoring affair, it was a full blooded and fiercely contested affair.

Foxrock Cabinteely got back on level terms in the 22nd minute when a mis kick dropped in around the house and corner forward Katie McNally was on hand to palm the ball to the net as she reacted quicker than Portlaoise keeper Aoife Hyland Conlon.

Just before the half time whistle, the Dublin champions took the lead with full forward Jodi Egan sending over a boomer from 30 yards to leave them 1-2 to 1-1 up at the break.

The Dublin champions really took control of the game in the opening five minutes of the second half and powered into a 1-7 to 1-1 by the 35th minute with star forward Jodi Egan landing three of those.

Portlaoise were now in real trouble as Dublin full back Niamh Collins and Westmeath star Fiona Claffey both came off the bench for the Dublin side in the early stages of the second half.

Portlaoise had no luck in the 43rd minute when they had a goal disallowed for a square ball while with the next attack, Foxrock Cabinteely came down the field and Katie McNally brought her personal tally to 1-2.

Fiona Dooley replied straight away with a point but at this stage, they trailed 1-9 to 1-2 with their defence under severe pressure.

Aisling Kehoe kept the pressure on with a point on 44 minutes. It was a half goal chance but her effort blazed over the crossbar for her second of the evening. There was time for another score before the third quarter came to an end and it was one of the scores of the night with Shaunagh Jackson kicking over under pressure to bring it back to 1-9 to 1-4.

With over 20 minutes of the second half played, Jodi Egan clipped over a free and at the later than normal water break, Foxrock Cabinteely held a 1-10 to 1-4 lead.

Fiona Claffey added another for Foxrock Cabinteely outfit just after the water break and with a seven point margin for Portlaoise to make up, they just couldn’t manufacture the scores that they needed.

Portlaoise were awarded a penalty in the closing stages with Shaunagh Jackson sending a rocket to the bottom corner and with time almost up, it was back to a five point game but that’s how it finished as a super Portlaoise effort fell just short.

Cash at the stiles to return temporarily for Laois GAA matches as Capacity at O'Moore Park increases to over 10,000