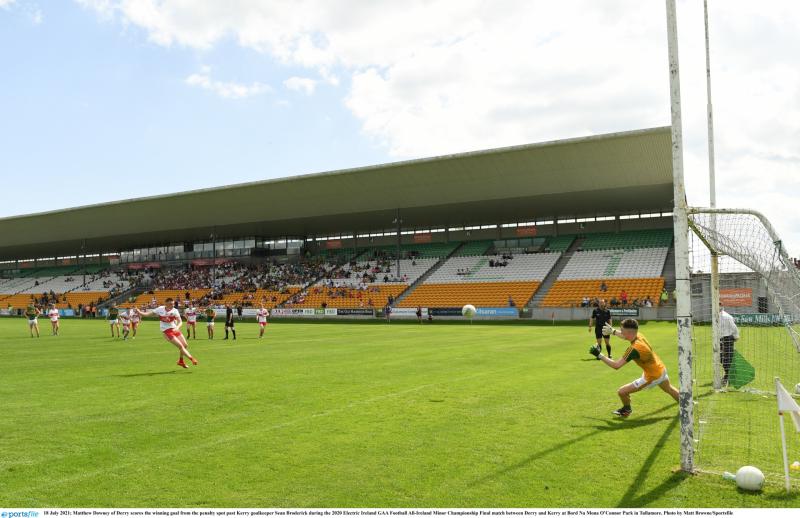 THE Offaly GAA County Board lease on O'Connor Park could be terminated in the coming months with full control of the county grounds reverting to Tullamore GAA Club after the row between the two bodies escalated further in recent weeks.

Relations between the County Board and Tullamore GAA Club have plummeted to an all time low with a letter from Tullamore circulated to clubs by the board ahead of an online County Board meeting tonight.

In the letter, which was sent to the County Board on July 10, but released to clubs ahead of their September meeting, Tullamore GAA Club claimed that their chairman Tom Martin was told by Offaly GAA chairman Michael Duignan last May that they would be “terminating the lease” - and that this position was also suggested in a letter from the board on June 23.

Minutes of an Offaly GAA management meeting last June make reference to meeting with Tullamore to discuss the potential for a “post lease rental agreement” for the use of O'Connor Park for matches.

Offaly GAA, however, have confirmed that they do not wish to end the lease, but wish to have the terms of it renegotiated. The minutes of an Offaly GAA Management Committee meeting on September 7 reveal: “An Cathaoirleach outlined the latest efforts from Offaly GAA to resolve the current impasse. In this regard a meeting was requested and held with Tullamore GAA on the 01/09/21.

At the meeting, An Cathaoirleach acknowledged that Offaly GAA do not wish to exit OCP. However, as result of the financial impact of losses arising in OCP for the past 19 years, compounded by the impact of the Covid-19 Pandemic, Offaly GAA wish to mutually amend elements of the current lease.

Tullamore GAA outlined their position in their letter dated 01/09/21 (distributed at the meeting on 01/09/21), that the lease agreement is not for review and OCP is not for sale. It was agreed to hold a Special Management Meeting to discuss the OCP Lease issue, with a view to putting a proposal to the clubs at a Special County Committee Meeting.”

In that letter on September 1, Tullamore GAA state very clearly that O'Connor Park is “not for sale”, the legal agreement is “not for review” and there is no “legal basis for such a review” and that they are proceeding with an abritation process. They went further as they accused Offaly GAA of being a “bad debtor for Tullamore GAA”.

Tullamore GAA Club further stated that the options for Offaly GAA are either to pay their outstanding lease fee of €48,284.82 immediately or to terminate the lease.

On termination of the Lease Agreement and in accordance with the Lease. Offaly GAA must:

3 Discharge all outgoings inclusive of all rent payments due to Tullamore GAA as per the Lease Agreement.

4 Yield up O'Connor Park {Including fixtures and fittings - other than trade or tenant's fixtures} together with all additions and improvements thereto and in such a state and condition that It be handed back to Tul/amore GAA in all respects. consistent with full and due performance.

Their letter last July escalated the row to breaking point though the County Board have since taken a significant step by stating that they don't wish to terminate the lease.

The dispute erupted last year after the County Board sought a reduction of the yearly rent on O'Connor Park because of loss of income with Covid-19 shutdowns. A subsequent offer of a €15,000 donation by Tullamore GAA Club was subsequently turned down and since then, things have not been resolved and relations appear to have got worse. The management committee stated that they did not accept this money “due to the conditionality of the offer”.

In a furious and hard-hitting letter last July, Tullamore GAA stated that they would be reluctant to enter into future discussions with the County Board about the future use of O'Connor Park if the lease is ended, accusing the board of showing them “contempt and total lack of respect”.

They stated: “As Offaly GAA now has a track record of being a creditor defaulter and is also a bad debtor for Tullamore GAA along with being in breach of a legal agreement with the Club, it would currently not be prudent or in the best interests of Tullamore GAA Club to even consider entering into any future discussions or arrangements with Offaly GAA in regard to the future use of O’Connor Park. In any event, Offaly GAA must firstly formally notify Tullamore GAA in writing that it will be invoking the break clause in the Lease Agreement.”

“It is noted from your letter that the Management Committee of Offaly GAA has made a decision not to accept Tullamore GAA’s generous offer to resolve the impasse in relation to Offaly GAA’s non-compliance with the O’Connor Park Lease Agreement.

“Tullamore GAA is surprised that our letter of offer was not brought to the attention of Offaly GAA’s County Committee for a decision rather than the decision being made solely at the discretion of the Management Committee. After all, the 41 Clubs in the county are the main stakeholders and decision makers in regard to this matter and surely from a good governance point of view, the Clubs are entitled to be involved in the decision making process.

“Your letter of the 24th May 2021 alluded specifically to cash flow problems arising from the implementation of the Covid-19 restrictions and I quote as follows:

“ ‘Offaly GAA are disappointed that previous requests for a discount on the O’Connor Park rent to recognise the impact of Covid-19 were not favourably considered by Tullamore GAA.’

“‘We would again request Tullamore GAA to offer a discount on the rent payable for 2020 and 2021 in view of the significant impact the Covid-19 pandemic restrictions has on the use of OCP………’.

“Given the contents of your letter as set out above, Tullamore GAA offered a significant amount of money to provide financial support to Offaly GAA in an effort to alleviate some of the cash flow difficulties that had arisen due to the Covid-19 pandemic as highlighted by Offaly GAA over the course of this dispute and again in your letter dated the 24th May 2021 as referred to above.

“Consequently, it is difficult to understand why Offaly GAA would turn down Tullamore GAA’s offer and refuse to meet Tullamore GAA halfway in an effort to resolve this dispute.

“In regard to Offaly GAA’s request to meet with Tullamore GAA to explore alternative ‘post lease rental arrangements’ for the use of O’Connor Park, it is very presumptuous of Offaly GAA to assume that Tullamore GAA will enter into any discussions with Offaly GAA given the contempt and total lack of respect that Offaly GAA has shown to Tullamore GAA Club over the past 18 months.

“As Offaly GAA now has a track record of being a creditor defaulter and is also a bad debtor for Tullamore GAA along with being in breach of a legal agreement with the Club, it would currently not be prudent or in the best interests of Tullamore GAA Club to even consider entering into any future discussions or arrangements with Offaly GAA in regard to the future use of O’Connor Park. MORE BELOW LINK.

“In any event, Offaly GAA must firstly formally notify Tullamore GAA in writing that it will be invoking the break clause in the Lease Agreement.

“At this stage, Tullamore GAA has been informed verbally at a meeting requested by Michael Duignan with Tom Martin which was held in Dr Kelly’s Field on the 8th May 2021 that Offaly GAA would be terminating the Lease Agreement with Tullamore GAA. This position is also intimated in your letter of the 23rd June 2021.

“Tullamore GAA is very surprised that the 41 Clubs in this leasehold have not been consulted in regard to this decision given that 42 of the then 44 clubs (95%) in Offaly voted in favour of the Lease Agreement when it was put in place.

“On termination of the Lease Agreement, Offaly GAA must:

3 Discharge all outgoings inclusive of all rent payments due to Tullamore GAA as per the Lease Agreement.

4 Yield up O’Connor Park (including fixtures and fittings – other than trade or tenant’s fixtures) together with all additions and improvements thereto and in such a state and condition that it be handed back to Tullamore GAA in all respects, consistent with full and due performance.

“It should also be noted that on termination of the Lease, Offaly GAA’s current existing debt on O’Connor Park in the sum of approximately €1.8m will remain a debt for Offaly GAA which ultimately will continue to be serviced by the Clubs of Offaly through the payment of the club levy over the coming years.

“As Tullamore GAA has made every effort in difficult circumstances to meet Offaly GAA half way in resolving this dispute, it is very disappointing that Offaly GAA could not reciprocate in a similar manner.

“Consequently, Tullamore GAA having concluded discussions with Offaly GAA, Leinster Council and Croke Park and also having made a significant offer to resolve this dispute, the Club is now left with no alternative but to proceed immediately with the arbitration process so that Tullamore GAA receives the full rent that is owed in accordance with the Lease Agreement.

“In relation to Offaly GAA’s intention to terminate the Lease Agreement as communicated by Michael Duignan to Tom Martin, Offaly GAA need to formally notify the Club of its decision in writing giving 6 months advance notice and must pay all monies owed including the full amount of rent due to Tullamore GAA. In addition, Offaly GAA must surrender and yield up O’Connor Park in accordance with the terms of the Lease Agreement.

“Please forward formal notification of Offaly GAA’s decision to terminate the Lease Agreement as soon as possible, so that Tullamore GAA can commence its preparations for the surrender and yielding up of O’Connor Park by Offaly GAA. Tullamore GAA request that this letter be read into the minutes of the County Committee’s next meeting.”

Offaly GAA chairman Michael Duignan and Tullamore GAA chairman Tom Martin had no further comment to make on the impasse on Tuesday afternoon. A discussion on the row was possible for Tuesday's County Board meeting but could also be deferred until specific proposals are made by the board at their planned special meeting.