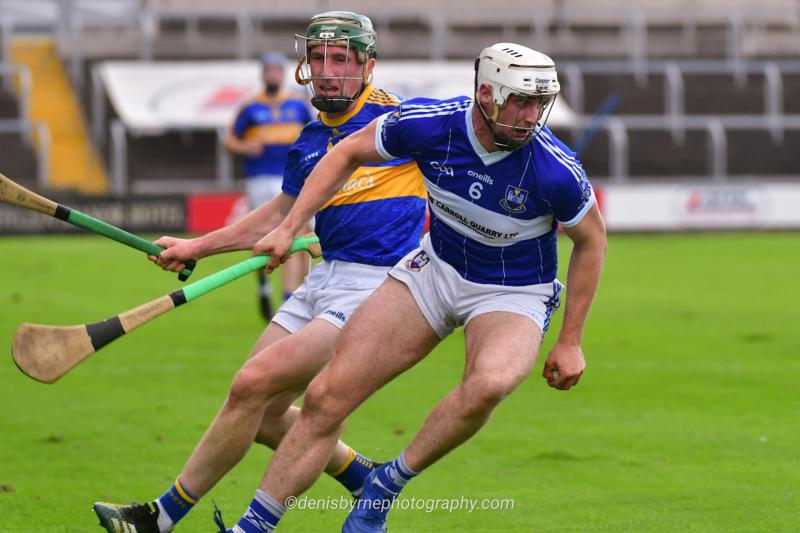 Clough/Ballacolla are into the semi finals of the Laois Senior Hurling Championship after a resounding win over Castletown. Led by star forward Stephen Maher who scored 2-10, the first half was a tight affair but Clough/Ballacolla cruised home in the end, winning by 19 points. Despite such a heavy loss, Castletown still go through to the quarter-finals and they will certainly have a lot to improve on before their game against Camross in two weeks’ time.

Clough/Ballacolla started off well and had two points on the board inside the opening 90 seconds courtesy of Stephen Maher and John Dwyer. Castletown did open their account soon after with a point from wing forward Conor Phelan, but Clough/Ballacolla responded almost immediately through Jordan Walshe.

Clough Ballacolla almost raised a green flag when Stephen Maher cut inside, but his goal attempt was hit straight at John Paul Bennett who saved well with Maher converting the resulting ‘65’. Clough/Ballacolla looked like they might pull away, but Castletown did not lie down easily, and they rallied off three on the bounce from Martin Phelan, John Gaughan and a fabulous Brendan Reddin point to reduce the deficit to two at the first water break.

Castletown levelled soon after the water break with points from Reddin and John Gaughan and they grew into the game. Maher and Conor Phelan traded scores before Clough/Ballacolla raised their first green flag of the day. A long ball was sent into the danger area and it was Maher who rose highest and plucked it from the sky. Amongst a crowd of bodies from both sides, he somehow managed to find space for a shot and his low effort flew past Bennett.

It was nip and tuck for the remaining of the half with both teams counteracting their opponents scores. Robbie Phelan got the last score of the half for Clough/Ballacolla to leave it a four-point game at the half time break.

Castletown needed a good start to the second half, and two minutes in, their dream came through. Martin Phelan found an unmarked Brendan Reddin with a handpass 25 yards out from goal. Walshe still had a lot to do, and he fired low from a tight angle and into the net to reduce the deficit to two once again.

It was the scare that Clough/Ballacolla needed, and they rallied off the next five points, including two from midfielder Aidan Corby and an excellent score from Jordan Walshe to increase the gap to seven. Tadhg Cuddy did pull a free back for Castletown, but it was all Clough/Ballacolla at this stage and Stephen Maher and Corboy continued the charge, leaving at an eight-point lead at the second water break.

Cillian Dunne was introduced as a sub at the second water break, and he had an instant impact with his first touch. He was first to react to a loose ball and with the goal at his mercy, he buried to the back of the net to all but end the game as a contest.

Clough/Ballacolla were in cruise control now and Castletown struggled to cope with the fitness and physical levels of their opponents. Maher, Corby and Walshe hit points at their ease, and 54 minutes in, they were in again for their third goal of the game. Corby did all the hard work as he burst through the Castletown defence and he laid it off to Maher who made no mistake in burying to the net for his second goal of the day.