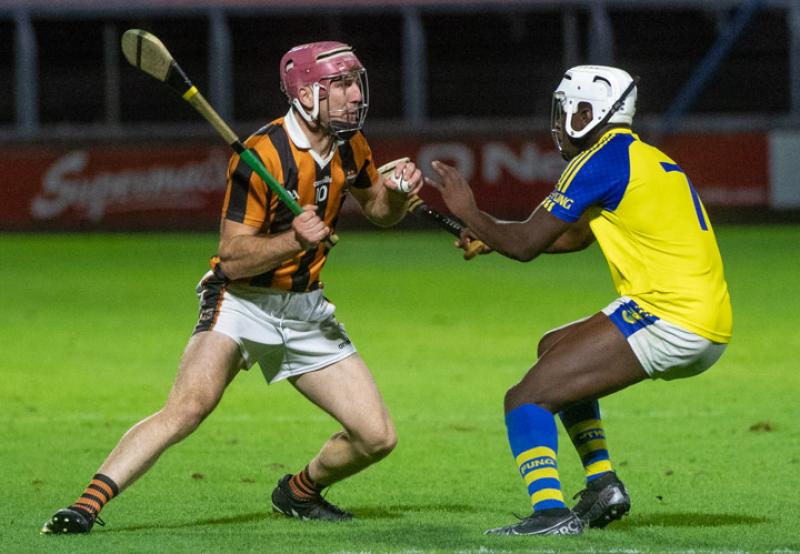 Mark Dowling and Zane Keenan led the way for Camross as they disposed of Abbeyleix and booked their place in the quarter finals of the Laois senior hurling championship.

In the do or die affair for both teams, Camross were the clear masters with Keenan and Dowling un-markable in the Camross attack.

It was a lively affair right from the get go and it was the Abbeyleix men who opened the scoring in the third minute with Aaron Brennan getting his first of the evening. Their lead was doubled a minute later when Ryan Peacock shortened the grip to fire over.

A couple of head high challenges went without a card early on as both sets of players looked well up for the physical battle.

Camross opened their account through a Zane Keenan free on five minutes and although Abbeyleix pushed 0-4 to 0-1 ahead thanks to two monster frees from Enda Rowland, Camross struck for the first goal of the game on nine minutes to bring them back level.

Mark Dowling got in behind Aaron Carroll and with the Abbeyleix defender slipping at the real wrong time, Dowling ran into close range and sent a rasper past Enda Rowland.

Abbeyleix briefly took back the lead a minute later but it was Camross who kicked on before the water break with four unanswered points, two of which were beauties from Darren Gilmartin from out under the stand.

They were well on top at this stage and despite Aaron Brennan landing a free just before the water break, it was the Camross men who led 1-5 to 0-6 at the end of the opening quarter.

Camross picked up where they left off after the restart and landed the next four scores with three from Zane Keenan and the fourth a brilliant score from Mark Dowling after he fetched a Keenan delivery into the full forward line.

Camross were rampant at this stage and they landed their second goal on 23 minutes when Keenan rifled home a penalty after Mark Dowling was dragged down in the area.

At 2-9 to 0-7, they were in cruise control. Aaron Brennan got one back for Abbeyleix but the next attack, the eight point Camross lead was restored when Liam Delaney fired over from distance.

With five minutes of injury time played in the opening half, it brought with it a flurry of scores. Both teams knocked over another two points  with Ciaran Collier and Zane Keenan on target for Camross while at the other end Declan Phelan fired over from out on the sideline to add to an Aaron Brennan free.

Abbeyleix got the second half off to a good start with Enda Rowland landing his fourth free of the evening before an Aaron Brennan free brought the margin back down to six points.

Camross didn't take long though to get into gear again. Keenan and Ciaran Collier added to their tallies before Abbeyleix botched a brilliant goal chance at the other end.

By the time Keenan landed his ninth point of the game just shy of 40 minutes, Camross led 2-16 to 0-13 and it was hard to see a way back for the Abbeyleix men.

Ryan Peacock and Mark Dowling traded scores while Rowland landed another long range free but just before the second water break, Ciaran Byrne squandered Abbeyleix' second goal chance as Tadhg Doran rushed out from the goals to put pressure on the shot.

Camross led 2-17 to 0-15 entering into the final quarter and showed no sign of letting up.

Ciaran Collier scored a wonder score from a tight angle in what was the highlight of the final 10 minutes while at the other end, Enda Rowland came up and drilled a 25 metre free, stitching it to the bottom corner of the Camross net.

That was only a consolation at that point as Camross marched on to the quarter finals and Abbeyleix, having drew with Borris-Kilcotton in the opening round, were condemned to the relegation playoff.