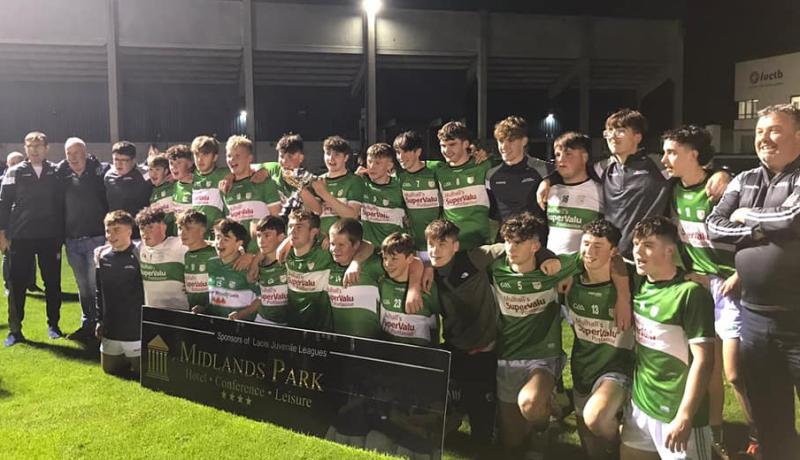 With the minutes counting down in the Laois Centre of Excellence, it appeared that Park-Ratheniska/Timahoe Gaels were on their way to getting over the line and winning the Minor ‘B’ hurling championship.

However, the Na Fianna amalgamation, who consist of Ballyfin, Clonaslee St Manman’s and Mountmellick, had other ideas. Dylan Kelly grabbed a goal to put them up by the minimum, and then full-forward Ciaran Culliton fired in another to seal a dramatic victory.

Glen Connolly opened the scoring for the evening in Portlaoise for Na Fianna, but they let in a goal moments later down the other end. Cian Nolan found Park-Ratheniska/Timahoe Gaels full-forward Conor Fitzpatrick, and Fitzpatrick twisted one way and then the other before blasting one into the top right corner.

Na Fianna replied well, with centre forward Tom Smyth converting a free, before Fionn Owens landed a point from play to level the score. Conor Fitzpatrick (free) and Dylan Roche-Duff fired over points for Park-Ratheniska/Timahoe Gaels before Dylan Kelly scored the final point before the water break to leave Na Fianna trailing 0-4 to 1-2.

Park-Ratheniska/Timahoe Gaels midfielder Adam Ramsbotton sent over a score immediately after the restart of play, but Na Fianna hit back with their first goal. Ciaran Culliton rounded his marker, Eoin Shortall, with a lovely bit of skill before finding Jack Heffernan, and his shot went into the bottom left corner despite the best efforts of Paul Mulhall in the goals.

Dylan Roche-Duff showed a nice burst of pace to make room and land his second point for Park-Ratheniska/Timahoe Gaels, but Tom Smyth responded immediately for Na Fianna with a sublime score from distance.

Murphy landed another after the break, as his powerful run ended with a point, and then Fitzpatrick tapped over a close range free. Ciaran Culliton replied with a lovely point for Na Fianna, but Park-Ratheniska/Timahoe came back with two more points through Fitzpatrick, with bot coming from placed balls.

Na Fianna fired over two big scores before the second water break to keep themselves within a goal of their opponents though, as Jack Heffernan landed two frees himself.

Fitzpatrick added another to his tally upon the resumption, but Na Fianna replied through Tom Smyth, who pointed from a free and a 65’. Fitzpatrick pointed another for Park-Ratheniska/Timahoe Gaels, but a Heffernan free cut the gap to just two points.

In the 60th minute, Ciaran Culliton managed to slide in Dylan Kelly, and he finished to the net to give Na Fianna the lead. A minute later and Na Fianna had completed the incredible turnaround, as a Tom Smyth sideline ball was picked up by Culliton, and he buried another into the goal to seal the trophy for his side.