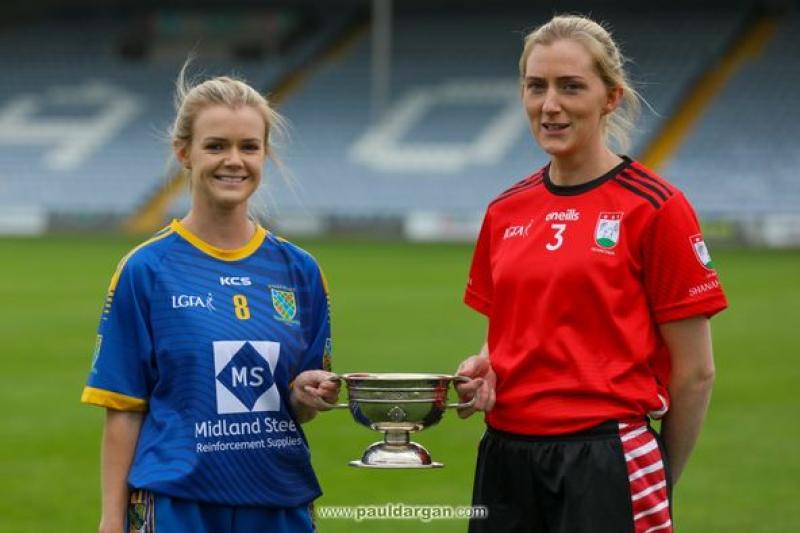 Sarsfields cruised to a comfortable 2-12 to 0-05 victory over Shanahoe on Saturday evening to book their place in the Ladies Senior Football Championship semi-finals. A powerful second quarter performance, which they scored six unanswered points to open up a six point lead at half time laid the foundations, as they cruised home in the second half.

Played under a fine October sun, it was ideal conditions for a game of football, although underfoot conditions did seem difficult at times during the game.

It was a low scoring affair in the first half, with mistakes plentiful and both teams struggling to break down their opponent’s defences in the early exchanges. Lorna O’Sullivan opened the scoring for Sarsfields, but Shanahoe quickly equalised with a free from Alice Walsh.

A brilliant Rachel Williams point just before the first water break gave Sarsfield the slight advantage at the break. The second quarter was all about Sarsfields as they dominated in all areas. They hit six unanswered points during that period, which completely changed the game.

Leah Tarpey hit two quick fire points, one after another and further points from Claire Conlon, Clodagh Lalor and O’Sullivan
opened up a significant lead in favour of Sarsfields. Alice Walsh’s free just before the half time break pulled one back for Shanahoe, but at Joe Brennan’s half time whistle, the gap was six points and Sarsfield had all the momentum.

Shanahoe needed a good start to the second half to have any hope of a comeback, but it was Sarsfields who started the better of the sides and they almost had a goal five minutes into the half.

Leah Tarpey had the goal at her mercy, but she blazed her shot wide of the target. Laura Marie Maher finished off a brilliant team move with a fisted point and she added to her first one a couple of minutes later with a fine individual score. Shanahoe were struggling to stop the Sarsfields train but they did get their first score from play in the 40 th minute off the boot of Mary
Griffin.

With the game effectively over as a contest, Shanahoe never game up to their credit, but they were just outclassed in all areas.

Sarsfields raised the green flag for the second time on 49 minutes with a wonderful solo effort from Tarpey and she unleashed a rocket which flew into the roof of the net. Shanahoe battled right to the end and Mary Griffin and Maggie Fitzpatrick did pick up consolation points for Shanahoe, but it was too little, too late as Sarsfields comfortably booked their place in the semi-finals.

They will face Portlaoise in a rematch of the 2020 Senior Final.