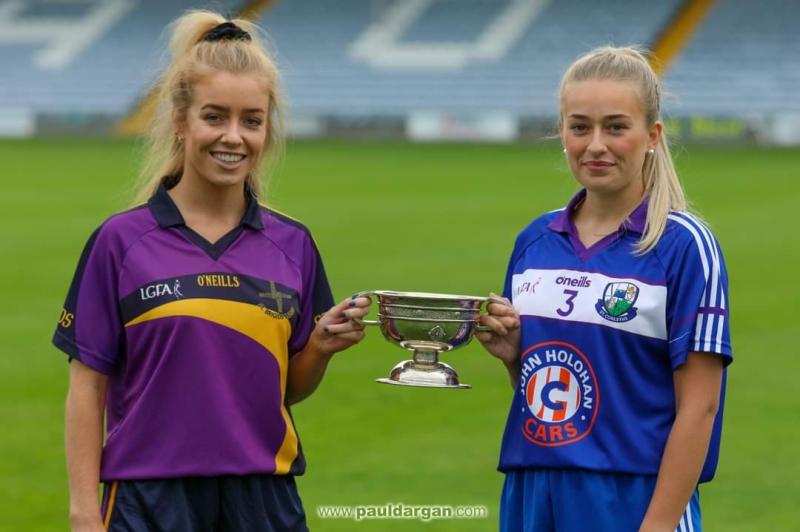 It took around eighty-five minutes of ferocious battling between St Conleth’s and St Brigid’s to decide a winner in McCann Park on Sunday night, but we eventually reached a conclusion.

Eva Galvin, Alanna Havill, Aoife Kirrane and Niamh Cullen all kicked points in the second half of extra-time to make sure St Conleth’s would compete in the Ladies Senior Football Championship final against Sarsfields in two weeks’ time.

St Conleth’s opened the scoring through Eva Galvin, who fired over after capitalising on a poor St Brigid’s kick-out.
St Brigid’s looked the better team for large parts of the first half and took the lead thanks to three points on the trot from Aisling Lacey (free), Patrice Whelan (free) and Fiona Fennessy.

St Conleth’s left just one between them at the first water break, as Sarah Walsh slotted over a free. Noel Whelehan’s charges had struggled to make inroads into the St Brigid’s defence in the opening quarter though, as St Brigid’s were resolute at the back.

St Brigid’s struck for the first of the game’s five goals upon the resumption of play. Aisling Lacey fielded a long ball in superbly, and quickly fed her fellow corner-forward Aisling Behan, who blasted to the net. St Conleth’s responded well to that goal, as Sarah Walsh scored a couple of frees and then Aoife Kirrane kicked over a beautiful point from play.

However, St Brigid’s struck for goal number two then, with Caoimhe Simms playing a clever chip pass to Anna Moore, who rattled the net.

St Brigid’s went in with a 2-3 to 0-5 advantage at half-time, but St Conleth’s quickly cut into that after the interval.
Sarah Walsh kept her composure from frees to convert two more, and then Aoife Kirrane managed to score her second point despite serious pressure from the St Brigid’s backs.

Centre-forward Deirdre O’Shea landed St Brigid’s first score of the second half after some good play from Anna Moore and Aisling Behan, and then Aisling Lacey placed over another free to extend their lead out to three points. St Conleth’s responded with their first goal of the match to level things up.

Some nice quick passing between Aoife Kirrane and Eva Galvin resulted in Alanna Havill being put through on goal, with St Brigid’s corner-back Meabh Gallagher bringing her down in the square.

Claire Fox stepped up to take the penalty, and although it wasn’t the prettiest spot kick, it trundled into the back of the net.
Patrice Whelan replied for St Brigid’s just before the second water break after good work from Jane Moore, as her side held a slender one-point lead on a scoreline of 2-6 to 1-8.

St Brigid’s must have thought they were on their way to the final when they scored their third goal. Patrice Whelan found Aisling Lacey with a nice pass, and Lacey in turn found Aisling Behan who scored her second goal of the game.

However, St Conleth’s showed their character to force extra-time. Quick thinking from Kirrane from a free allowed Sinead Cullen through on goal, and she turned sharply before blasting to the net.

Marie Byrne managed to place over a free, and referee Michael Tarpey blew for extra-time. St Brigid’s raced into an early lead upon the restart thanks to points from Lacey (free) and substitute Aoife Gallagher, but a St Conleth’s substitute, Niamh Cullen, managed to pull one back just before the whistle for half-time of extra-time.

St Conleth’s finished the stronger to pull away in the second half of extra-time. Eva Galvin, Alanna Havill, Aoife Kirrane and Niamh Cullen all raised white flags for St Conleth’s to ensure that it would be they who take on Sarsfields in the county final.