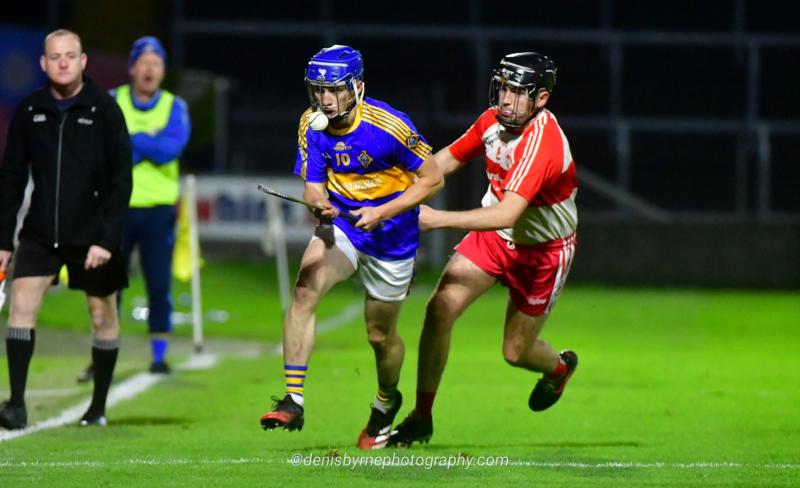 Trumera are the 2021 Laois IHC champions after a strong finish saw them past Clough-Ballacolla in O’Moore Park on Friday night.

With the teams level at 1-13 each with seven minutes of normal time to go, it was Trumera who found another burst of inspiration, hitting six points in nine minutes to gazump Clough-Ballacolla and get their hands on the trophy.

A slow start to the game saw only two scores in the opening ten minutes, as Trumera keeper Finnian Cuddy and Clough-Ballacolla corner-forward Shane Hyland traded points from placed balls.

Hyland then briefly put Ballacolla ahead from a free, after a foul on Canice Coonan, but Conor Madden quickly restored parity. Niall Sinnott then put Trumera in front with a long-range free before a flurry of goalmouth activity either side of the water break.

Clough-Ballacolla struck first when Canice Coonan poached a goal after Trumera had twice blocked shots on the goal line. The whistle for the water break sounded immediately after and whatever was said in the Trumera huddle certainly worked, because they hit back with a goal of their own through Dylan Lalor seconds after play resumed.

That set up a much more entertaining second quarter as Trumera started to slightly edge proceedings. Their forward line came into the game a bit more and by half-time, all six starting forwards had scores.

Clough-Ballacolla were relying on Hyland’s free-taking and a couple of efforts from Chris Rafter to keep them on Trumera’s heels, but by the interval the men in red and white were 1-10 to 1-6 in front.

Clough-Ballacolla came back strongly in the third quarter, paring away at the Trumera lead through Canice Coonan, Shane Hanlon and Shane Hyland. The gap was down to two at the water break, 1-13 to 1-11, but Clough-Ballacolla were on a charge.

Padraig Brennan (free) and Joe Corby made it a draw match with seven minutes of normal time to go, and it looked like all the momentum was with Ballacolla. However, to Trumera’s credit, they found another gear.

Adam Kirwan fired over a free to put them back in front and then Niall Sinnott took centre stage, hitting four of their next five points from long-range frees to put them firmly in control.

Ballacolla tried to fight back, but they were met with stout Trumera defending as they held on to claim a well-deserved three point win.