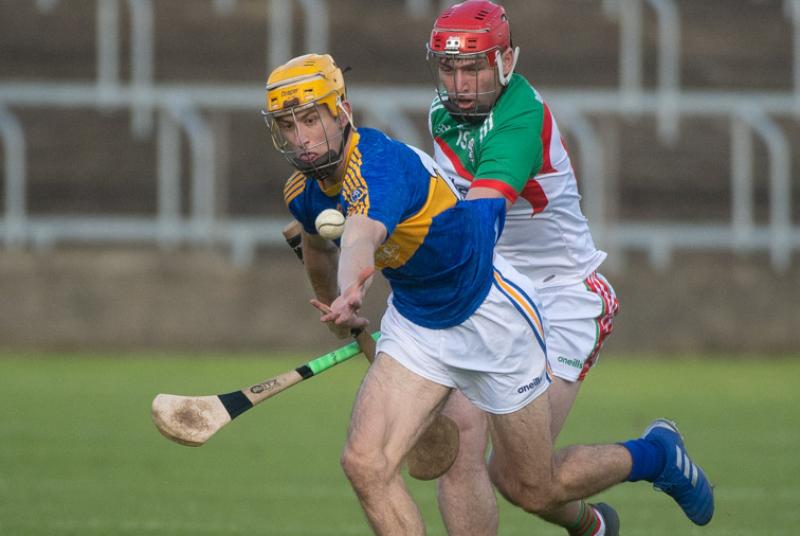 14 man Clough Ballacolla turned the tables on Rathdowney-Errill in the second half and cancelled out a five point half time deficit to march on to the County final in two weeks time.

They had two points to spare in the end and it could have went either way after Rathdowney-Errill game roaring back into it with late goals leaving it a nervy finished.

Eoin Doyle was sent off just before half time for his involvement in a melee as the game carried a fair bit of needle throughout.

Rathdowney-Errill played with the advantage of a strong breeze in the opening half and they wasted little time in making use of it. Dylan Carroll landed a free to get them going before Paddy Purcell fired over a beauty.

Stephen 'Picky' Maher was fighting almost a lone battle up front for the majority of the opening half and he opened his account on four minutes.

He followed that up with his first from play to square up the game and the tit for tat nature of the game pretty much continued right up to the water break.

Aidan Corby and Dylan Carroll exchanged points before another Maher free left the teams level at 0-4 each after 13 minutes.

Dylan Carroll edged Rathdowney-Errill back ahead just before the water break and while the opening 15 minutes were slow to take off, there was no shortage of action in the second quarter.

James Ryan and Dylan Carroll put Rathdowney-Errill three ahead before Paddy Purcell lit up O'Moore Park with a wonder goal. With 18 minutes on the clock, he picked up the ball out of a ruck, used his pace to cut through and from a tight angle sent a rasper to the corner of the net to put them 1-7 to 0-4 in front.

It was all Rathdowney-Errill and Clough Ballacolla were only just managing to stay in touch. Disaster struck for them then towards the end of the half when corner back Eoin Doyle was sent off for striking Paddy McCane. From that juncture, there was a real needle to the game.

Stephen Maher did land the last score of the half from a free as Rathdowney-Errill went in leading 1-9 to 0-7 at the break.

The second half was a different animal. Clough-Ballacolla came out  different team and nearly showed their true colours.

Points from Aidan Corby, Willie Dunphy and Jordan Walshe began to eat into the arrears with Dunphy's point a sublime sideline cut.

Now at 1-10 to 0-12, it was Clough Ballacolla who had all the momentum as Rathdowney struggled to get anything going. A Jordan Walshe ''65' levelled the game and while Liam O'Connell did land a long range free, points from Robbie Phelan and another free from Walshe left Clough Ballacolla leading 0-15 to 1-11 at the second water break.

With four minutes to go, Dylan Carroll pointed a free for R/E but they still trailed 0-21 to 1-12 and looked a beaten docket. They refused to give in though and late goals from James Ryan and Jack Kelly left it a one point game in injury time.