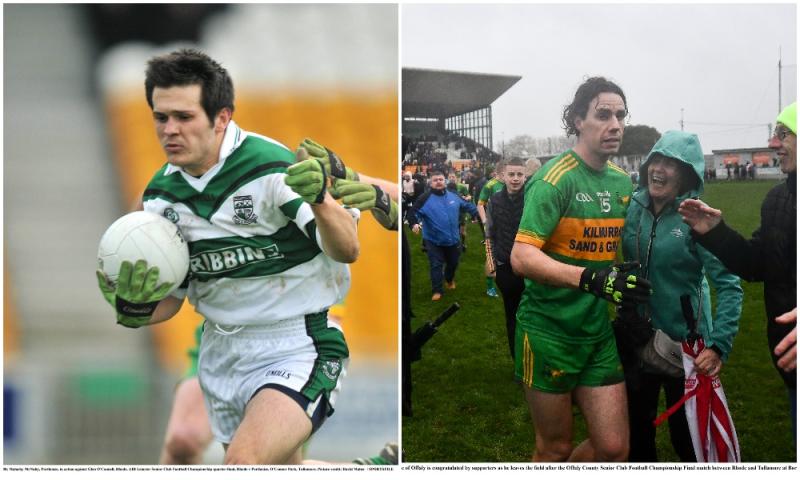 Niall McNamee after rescuing Rhode with a late goal.

A NIALL McNamee goal four seconds from the end of injury time rescued Rhode and left a gutted Tullamore searching for answers in a gripping Senior Football Championship final on Sunday afternoon.

Rhode, managed by Portlaoise man Malachy McNulty were on the verge of losing their Offaly crown before McNamee struck with a wonder goal with the last kick of the game to set up a replay on Sunday week.

Tullamore let a golden chance slip in a game where they were the better team and really should have shut it out. With the winning post in sight, errors began to creep into Tullamore's game and the equalising goal summed this up as Ciaran Burns picked the ball up – the pass to him from Diarmuid Egan did put him under pressure – and Rhode swept into attack. McNamee gathered a long Anton Sullivan ball on the edge of the square and applied a superb finish to give Rhode a second chance.

The champions definitely got out of jail here. They played with fourteen men from the 23rd minute after Alan McNamee got a straight red for a heavy hit on Diarmuid Egan and it was really set up for Tullamore to win.

They should have done it and looked to have it done when they led by three points deep into added time. Rhode were certainly fortunate here and not one of their supporters would have complained at the justice of a Tullamore win. However, Rhode kept plugging away when the odds were stacked against them, they were never put away and they got a replay that is likely to take place this day fortnight.

It may have been a low scoring game but this was a fantastic, entertaining affair. It was hard hitting, it was uncompromising and it was so tough but it made for compelling, exciting viewing. It was a thriller really and both sides deserve huge credit for the way they played in very difficult conditions with rain falling for a lot of it and a heavy pitch.

The first half was a thrilling, ferocious affair with neither side pulling back an inch. There were plenty of talking points, players straying close to the line and it culminated in Alan McNamee receiving a straight red in the 23rd minute after a heavy hit on Diarmuid Egan. Niall Darby had been relieved to see yellow a few minutes earlier after an incident that left Harry Plunkett on the ground but got away after Harry's brother Luke came tearing in to push Darby – Luke also got yellow and may well have saved Niall from a red.

The football was also very good, very honest. The conditions were very difficult but the skill levels of both sides was high. Tullamore made a decisive break in the third minute when Aaron Leavy got in for a goal after a great break forward by Diarmuid Egan. That gave Tullamore a 1-0 to 0-1 lead an Rhode came back well from that.

Points from Aaron Kellaghan and Darren Garry had it back to a point by the 13th minute and Tullamore were fortunate that Rhode had a few bad wides. Kellaghan levelled it up in the 26th minute but Tullamore finished the half very well. Making their numerical advantage count, Harry Plunkett, Luke Plunkett and Michael Brazil got fine points to give them a 1-4 to 0-4 half time lead and they were in a very good position.

As so often happens a team with an extra man, Tullamore were caught between attacking their opponents and holding what they have in the second half. Ultimately they errored on the side of caution, getting increasingly defensive as the half wore on but the real reason they didn't win was the amount of errors they made. The conditions may have been a factor but Tullamore made a lot of handling and ball retention mistakes, allowing Rhode to get on the ball at a crucial stage.

Tullamore led by 1-7to 0-5 after 43 minutes and were in a very strong position but they struggled badly as Rhode fought with every ounce of their lives. Points from Anton Sullivan and a Niall McNamee (free) brought the gap back to three points with nine minutes left. Rhode had a couple of bad wides but a brilliant Niall McNamee point, striking over as three men converged on him, reduced it to two.

A superb Michael Brazil point put Tullamore back three in front with five minutes left and in the wind up, that proved to be a crucially important score as it meant that McNamee's goal was an equaliser and not a winner. It was heart in the mouths stuff late on before McNamee rescued Rhode.

It was ironic that McNamee was their saviour as he had one of his quieter games. Declan Hogan had done a superb marking job on him though McNamee's influence increased as it wore on and he got the crucial scores.

Most of the best players wore the blue of Tullamore. Declan Hogan, John Furlong Michael Brazil were the three outstanding players here with Hogan having arguably his best ever game for Tullamore, Furlong making a mockery of his youth with another super defensive display and Brazil getting three points from midfield, though he did make a couple of crucial mistakes late on. Paul McConway, Johnny Moloney, Harry Plunkett and Luke Egan also excelled for Tullamore while Diarmuid Egan got through a mountain of hard work.

Rhode lived on their wits here. Conor McNamee was superb for them in the second half as he carried the ball up field while Aaron Kellaghan had a fine first half for them and Niall Darby, Anton Sullivan and Niall McNamee had good spells for them.

Declan Hogan (Tullamore): Declan Hogan gave a superb defensive performance for Tullamore. He stuck to Niall McNamee, won a lot of 50/50 ball and made two memorable blocks before half time.

MOMENT OF THE MATCH

A mixed bag by Marius Stones. It was a very physical game and it probably needed a red card to ensure that it didn't get out of hand. That fell to Alan McNamee and that largely removed the edge from it. There were a few debatable decisions here, harsh frees awarded and clearcut ones not given but it was that type of match in that type of weather and these balanced out overall.

There is no winners or losers in a draw but if there was, the winners here were Rhode, the losers Tullamore, who will now have to pick themselves up after letting a golden chance slip.

A large crowd created a great atmosphere here. The pitch was heavy but that is unavoidable at this time of year and it was a great occasion.

The sides will have to meet now in a replay.