Mick Dunne from Clonaslee was a founder of the awards 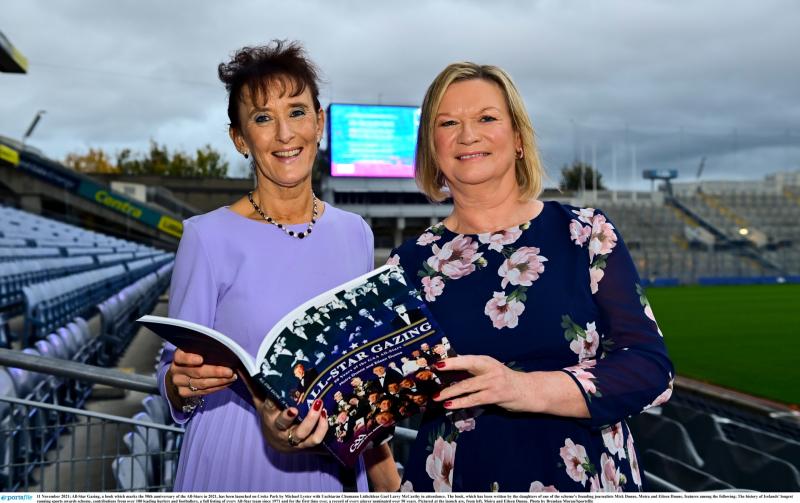 Pictured at the launch are, from left, Moira and Eileen Dunne. Photo by Brendan Moran/Sportsfile

All-Star Gazing, a new book which marks the 50th anniversary of the All-Stars in 2021, has a big Laois connection.

Launched on Thursday, November 11 in Croke Park by Michael Lyster, the book is written by the daughters of one of the most famous Laois-born sports broadcasters Mick Dunne from Clonaslee.

Moira and Eileen Dunne have written the book which is a history of Irelands’ longest running sports awards scheme.

Using their father’s records as a starting point, the sisters met over 100 All-Stars and other stakeholders, who shared their memories of All-Star banquets, All-Star trips along with reflections on what the accolade means to the players, families and communities.

The book includes a listing of each Gaelic football and Hurling All-Star team from 1971 to 2020, and for the first time ever, a complete list of all players nominated over the past 50 years. 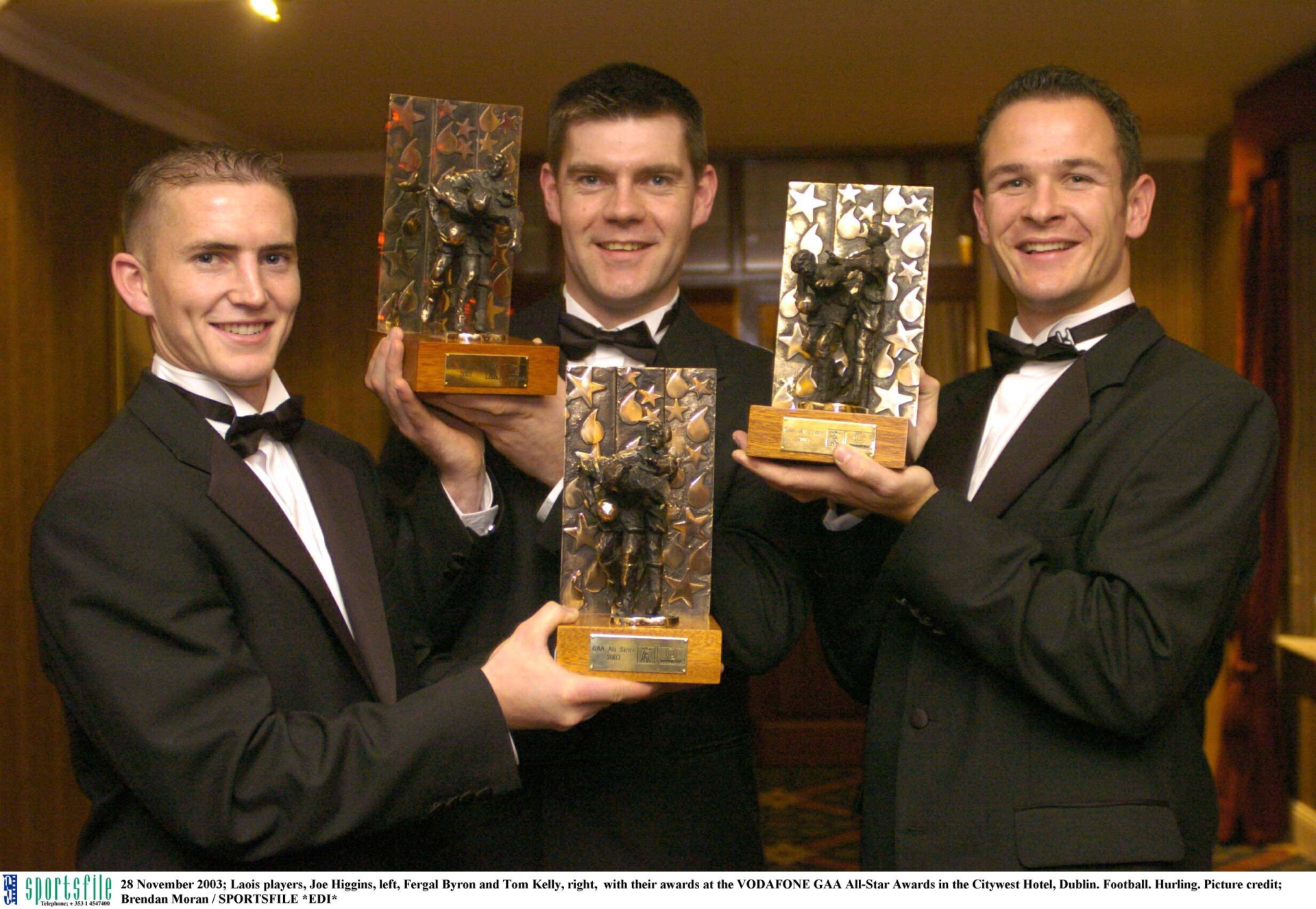 Mick Dunne who was a presenter, reporter and commentator on RTÉ got the All-Stars up and running in 1971 with his fellow journalists, Paddy Downey, John D Hickey and Pádraig Puirséal.

A UCD graduate, Eileen is best known as the RTÉ newscaster and radio presenter and director of the Kennedy Summer School. Though born in Dublin she is an honorary Laois woman paying many visits to her father's county down the years supporting many charities along the way.

The Dunne sisters grew up with Gaelic Games and spent much of their youth travelling the country to matches with sister Una, mum Lilly, and dad, the broadcaster Mick Dunne.  Their childhood is one of summer family picnics en route to Thurles, Killarney, Clones or Crossmaglen. They continue to follow the games ardently as GAA season ticket holders.

“The GAA All-Stars is the most prestigious sporting awards scheme in Irish society and has gone from strength to strength since its inception in 1971.

"While the GAA and various sponsors – current partners PwC among them – have played a central role in running the scheme, one of the most important pillars of the All-Stars has been its independence and integrity, provided by the role of GAA journalists making the all-important selections of both nominees and overall winners. To that end, it is fitting that the Dunne sisters, Eileen and Moira, should be the driving force behind this excellent publication to mark the 50th anniversary,” he said. 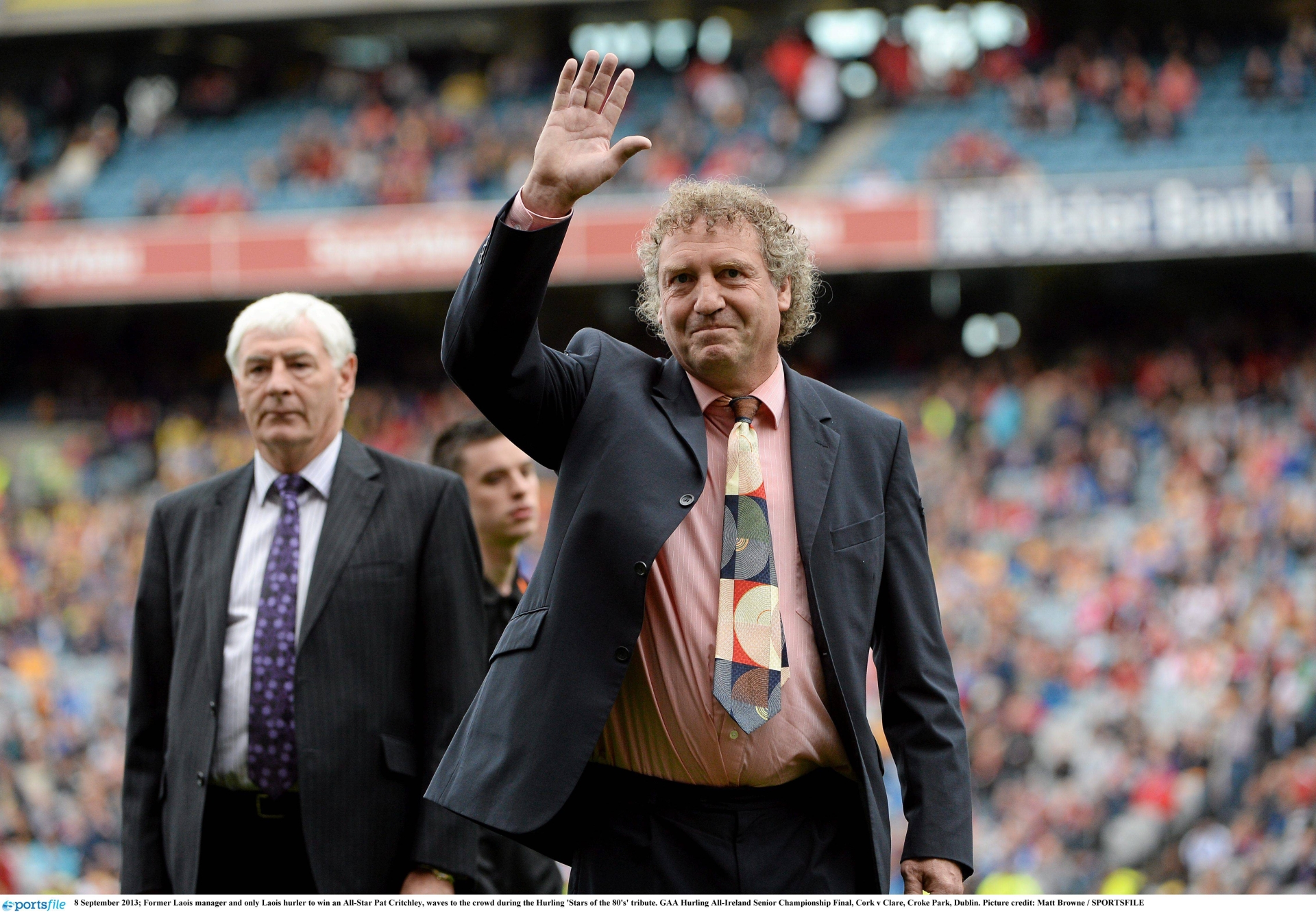 "We would like to congratulate Moira and Eileen Dunne on the launch of their fantastic book celebrating the 50 year history of the All-Stars. The book showcases a superb collection of All-Star players down through the decades, whose talent, teamwork and sheer determination have awed us all. As proud sponsors of the PwC All-Stars we are delighted to celebrate the 50th anniversary and to show our support for the book. No doubt it will be in high demand with all GAA fans."

Moira Dunne told the GAA how it came to be that they set about writing the book.

"Our dad's office is still in situ in our home because our mother (Lilly) is still alive. She's 93. In 2010 we gave all Dad's match records over to the GAA museum, so the office was quite depleted. A few years ago I was in the office looking for something GAA related for a player who had done me a favour. I couldn't find what I was looking for but instead came across a dusty old box underneath the shelf on the floor. 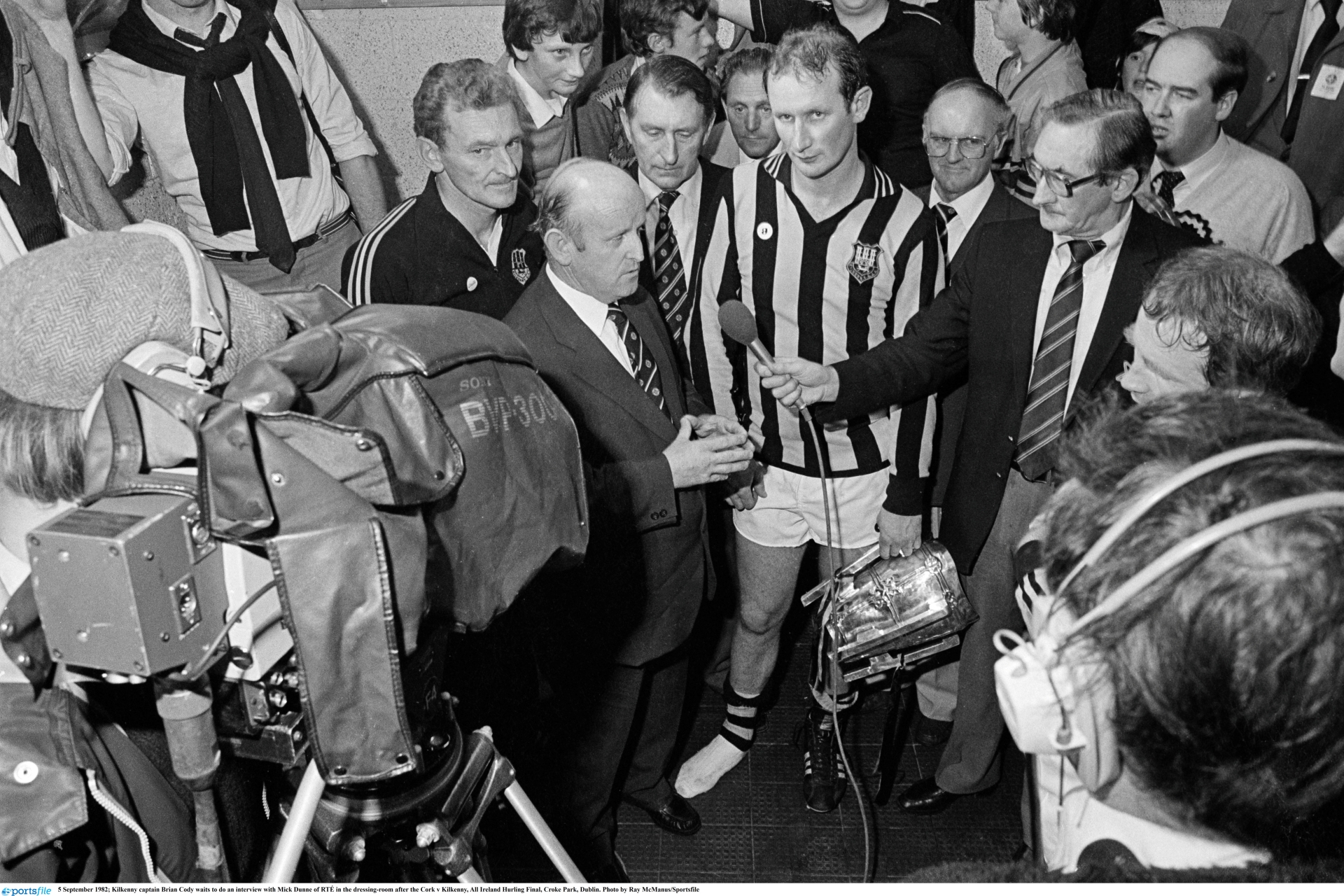 "I pulled it out and it contained 25 files covering the first 25 years of the All-Star scheme. It was information we didn't know we had. The particular player I was meeting had just received their first All-Star, so I was thinking there might be something here that's relevant. Then I looked back 40 years to see who won the awards that year.

"I discovered letters from Jack Lynch and Seán Ó Siocháin and handwritten letters from many great players. There was also the official documents with minutes of the first meeting, etc. So, I thought, ‘there is something worthwhile here'. I remember texting Eileen to tell her that I had found a lot of information about the All-Stars.

"We realised that in a few years time it would be 50 years since the scheme started. We knew we should do something with the information and joked about which journalist we would give the files to. Soon after, I was telling my good friend Marie about the discovery and she suggested that we do something with the records ourselves.

"And it kind of went from there really," she said.

It was fitting that Mick's third daughter Úna can make it home from the USA for the publication. The three daughters and their mum placed the first copy of the book on his desk of Mick's hope office

"The circle will be closed," concluded Moira.

More about the book at https://allstargazing.ie/ 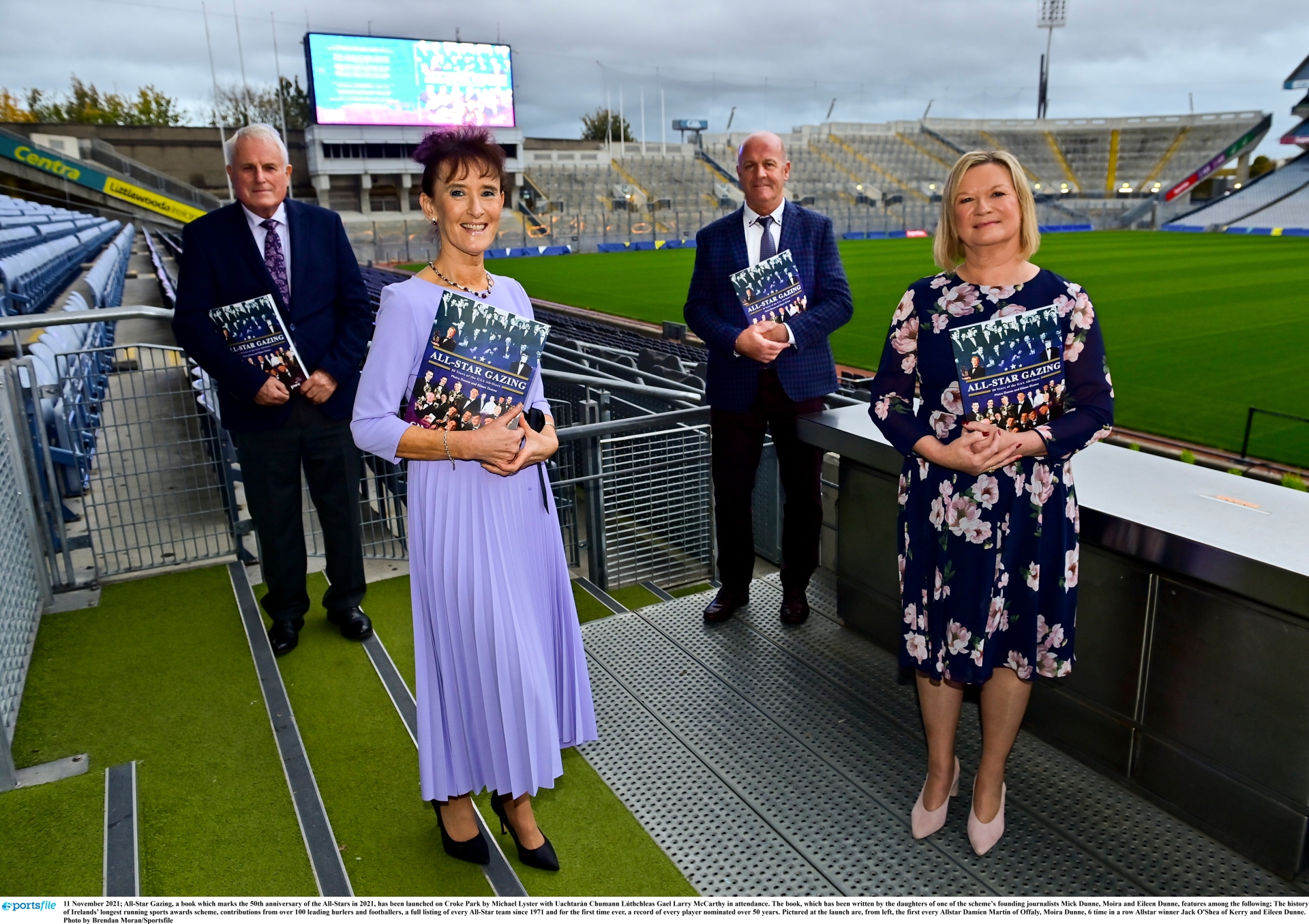