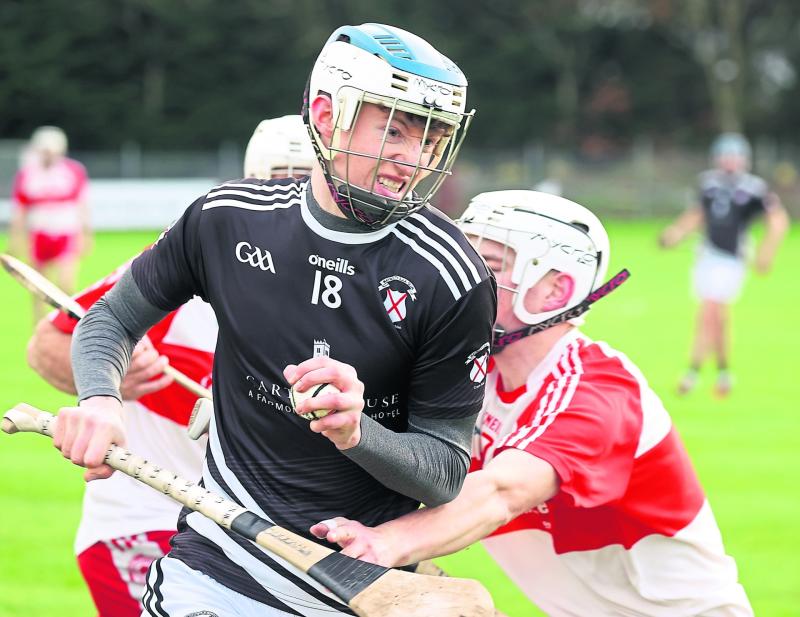 The final score line in this AIB Leinster Club JHC quarter final, is without doubt, a little harsh on Laois champions Trumera, and while the honours rightly went where they belong, the visitors to Clane on Saturday afternoon, were in this game for long periods and mid-way through the second half there was just three points separating the sides.

On a bitterly cold day Trumera had the benefit of the icy breeze on their backs and for long periods of that opening half more than held their own as Maynooth, minus Cian Forde, failed to get up to anything like the level we have come to expect of them.

In fairness through they did not panic, kept plugging away and slowly but surely got into their stride and would have been more than pleased to be level at the break at 0-5 apiece.

It was a game dominated by two expert free takers, David Qualter of Maynooth and Adam Kirwan from Trumera, between them they accounted for no less than 18 points from placed balls between them.

And while Qualter for the score board ticking over for Maynooth, Kirwan quickly replied followed by a point from play from Dylan Lawlor.

Paddy Hosey added another for the visitors, Adam Kirwan added a point and when the same player added another the Laois boys led 0-5 to 0-2, Tadhg Forde having pointed for Maynooth.

After the opening water break, Maynooth spurned a couple of goal chances, through a combination of some excellent defending and poor finishing but gradually the boys in black got to grips with the situation and by half time had drawn level with three frees from the unerring David Qualter.

With the wind on their backs Maynooth seemed to hold the upper hand but another Adam Kirwan free had the visitors back in front on 31 minutes.

Qualter leveled, Harry Dunne and Qualter had the home side two clear but Trumera were not going away and two Kirwan frees had the sides level again on 38 minutes.

Before the second water break though Maynooth had edged three clear 0-12 to 0-9 and were looking good at that stage and before just before that thirst quencher Graham Kenny got in behind the Trumera defence to fire to the net to push the lead out to 1-12 to 0-9.

Again showing great tenacity and refusing to roll over the boys from Laois got right back into it, substitute, Joseph Coogan made no mistake from close range and when Kirwan added a free there was just two points separating the sides on 20 minutes, 1-12 to 1-10.

However from here on in it was all one way traffic with Maynooth taking control, holding their opponents scoreless for the rest of the game while adding six points from Tadhg Forde, David Qualter (3) along with white flags from Ronan Dunne and Cathal McCabe to clinch victory on a final score line of Maynooth 1-18 Trumera 1-10.