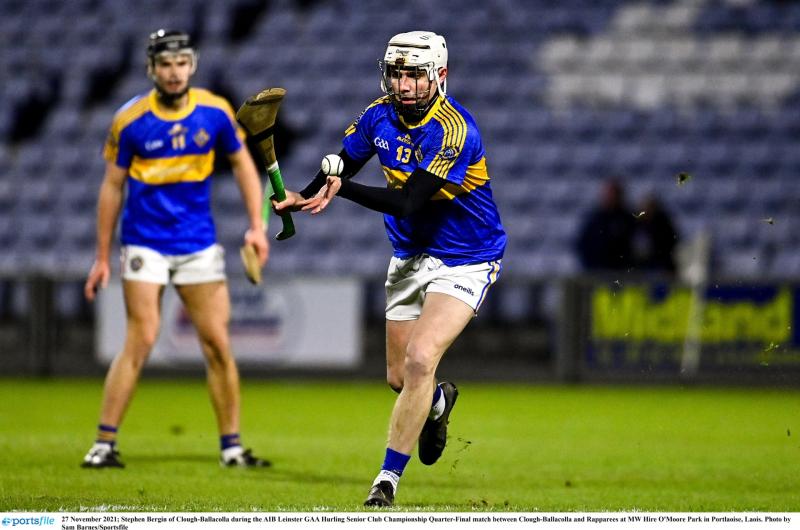 The two-in-a-row county champions, Clough-Ballacolla, opened their 2022 season by once more locking horns with the team they beat on both occasions to win those titles, Borris-Kilcotton.

While both teams were far from full strength here, Clough-Ballacolla proved to have that bit more class to grab the victory. Stephen Bergin was magnificent, scoring eleven points for Clough-Ballacolla, while veteran John Dwyer scored a crucial goal in the first half.

Clough-Ballacolla, who played against the wind in the first half, rushed into an early three point advantage. Stephen Bergin slotted over two frees either side of a Canice Coonan point from play.

Borris-Kilcotton began to grow into this one after that, as centre-forward Joe Campion got them on the scoreboard in Ballacolla for the afternoon. Emmet Jones then knocked over a free.

Stephen Bergin responded by scoring his first point from play. Bergin curled over a beauty from a tight angle and under pressure from the Borris-Kilcotton backs.

Emmet Jones landed another free for Borris-Kilcotton, before Shane Hyland made space for himself to score a nice point from play for Clough-Ballacolla. Jones and Bergin then exchanged points from placed balls, before Jones scored two frees on the trot to level the teams.

However, Clough-Ballacolla scored the only goal of the game after that, and they never looked back from that point on. Seán Corby unselfishly played in full-forward John Dwyer, and while Dwyer’s first attempt was saved by Borris-Kilcotton keeper Eoin Fleming, Dwyer made sure to finish the rebound.

Bergin pointed another free, before further points from Brian Corby and Tim Delaney pushed Clough-Ballacolla six ahead. Jones ended the drought for Borris-Kilcotton with his fifth free of the half, but Bergin landed the last score of the half to leave Clough-Ballacolla ahead on a scoreline of 1-10 to 0-7.

Borris-Kilcotton cut into the deficit upon the restart, with Jones converting two frees to leave four separating the sides. Bergin and Jones proceeded to swap points from frees after that.

Bergin pointed another free before Clough-Ballacolla scored the first point from play of the second-half, with Shane Hyland landing his second of the day. Borris-Kilcottom kept plugging away though, with Eoin Fleming and Jones both raising white flags from placed balls.

Bergin scored another brilliant point from a difficult angle to keep the scoreboard ticking over for the county champions. Eoin Fleming replied fo Borris-Kilcotton with another long-range free, but further points from Tim Delaney and Bergin made sure that Clough-Ballacolla collected the two points on offer.