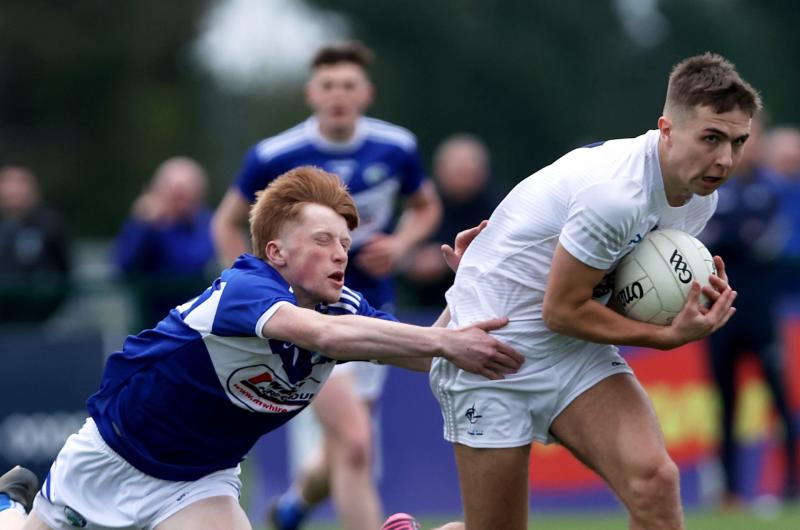 Kildare Tommy Gill holds off the challenge from Laois Rioghan Murph during the Leinster Gaa U20 Football Championship played at Hawkfield, Newbridge

Laois almost came back from the brink on Thursday night but in the end saw their fighting comeback fall just short as the exited the Leinster U20 football championship.

This Leinster U20 Leinster Football Championship U20 quarter final at Hawkfield COE, Newbridge, saw Kildare lose a first half nine point lead, after opening brilliantly with goals from Dean O'Donoghue and Daniel Lynam but still led at the break 2-9 to 2-5. The visitors getting back into the game with two stunning goals inside a minute from Davin McEvoy and Paddy Hosey, to bring that lead back to manageable proportions.

But hitting 1-3 in a blistering five minute spell the difference was back to two points.

Kildare steadied the ship with a fine point but then picked up a black card with five minutes remaining.

Two points had the margin back to a single point before Eoin Bagnall, who converted five excellent frees, edged Kildare two clear as we entered time added on.

Deep into injury time a miss-placed clearance put Oisin Hooney in on goal but with the goal at his mercy he missed the target, pushing his goal attempt left and wide as the final whistle arrived, Kildare winning on a final score line of Kildare 2-16 Laois 3-11.