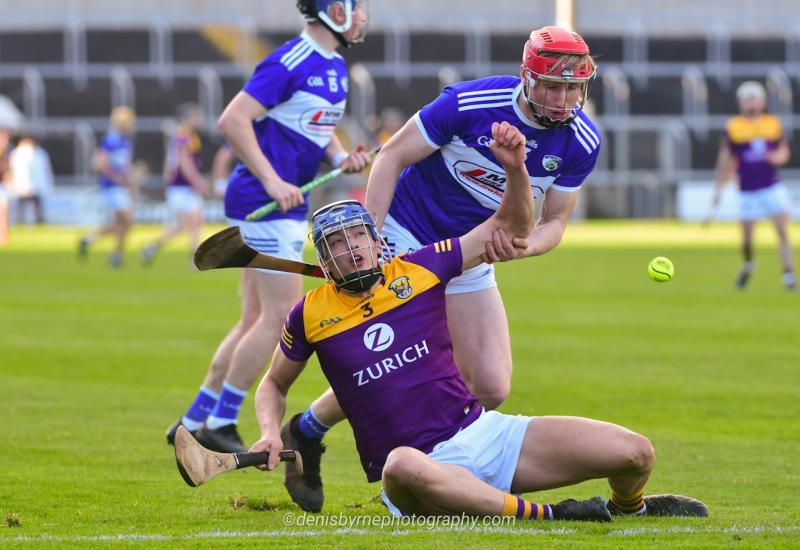 There was heartbreak for the Laois u20 hurlers as their attempt to make the Leinster U20 hurling semi final fell agonisingly short in O'Moore Park on Tuesday night. Leading by two points at half time, Laois looked in a good place but Wexford turned the screw in the third quarter to pull clear.

A dramatic last few minutes saw Laois narrow the gap to a point but unfortunately for them, time wasn't on their side and they were edged out by a point.

Laois started well and had the opening score of the game after only 35 seconds with Dan Delaney firing over from play with the first of his six first half points. Wexford settled into the game and full forward Cian Byrne got them off the mark in the second minute before the men from the South East broke into the lead after wing forward Cory Byrne Dunbar fired over.

Laois were well up for the battle and moving the ball well with Dan Delaney making no mistake with three frees in the space of two minutes to put them back into a 0-4 to 0-2 lead after 10 minutes.

Byrne responded again for Wexford with a point from play and one from a free as the tight nature of the opening half continued. Shamey O'Hagan made a blistering run down the wing on 17 minutes and his effort sailed over the bar as Wexford wrestled back the lead.

Tadhg Cuddy levelled proceedings a minute later before Delaney nailed another free to push Laois into a 0-6 to 0-5 lead. Wexford drew level again on 22 minutes but points from Philip Tynan and Adam Kirwan had Laois two points in front with half time looming.

Wexford then had a glorious chance on 30 minutes when Cory Byrne Dunbar raced clear on goals but Laois keeper Paddy Hassett made himself big in the goals and managed to deflect the shot over the bar.

Five minutes into first half injury time and Dan Delaney closed out the scoring with a free as Laois took a deserved two point lead into the break - 0-9 to 0-7.

Wexford got the perfect start to the second half with two points to level the game after five minutes. Cian Byrne landed a free before Adam Redmond levelled the game.

Adam Kirwan was causing problems for the Wexford defence and he won a free for Dan Delaney to fire over as Laois regained the lead. That lead was short lived as Cian Byrne once again fired over a close range free on 39 minutes.

Wexford then began to take over and hit three points on the spin with Cory Byrne Dunbar nailing the pick of those scores as they soared into a 0-13 to 0-10 lead with 15 minutes to go.

Cillian Dunne got Laois' first score in six minutes to narrow the gap to two points before Abbeyleix man Shaun Fitzpatrick struck over to make it a one point game.

Wexford managed to pull away again though with substitute Tomas Kinsella sending over a well taken brace of points to put the visitors 0-15 to 0-12 ahead.

Eddie Critchley and Byrne Dunbar traded scores but there was still three between them with two minutes to go. Cillian Dunne did fire over a free in the 60th minute but it was a goal that Laois craved.

AJ Redmond came up from corner back to restore the three point lead for the Wexford men as four minutes of injury time played out.

Cillian Dunne sent over another free after Tomas Keyes was fouled while Cody Comerford also fired over but with time running out, the Laois effort fell just short.