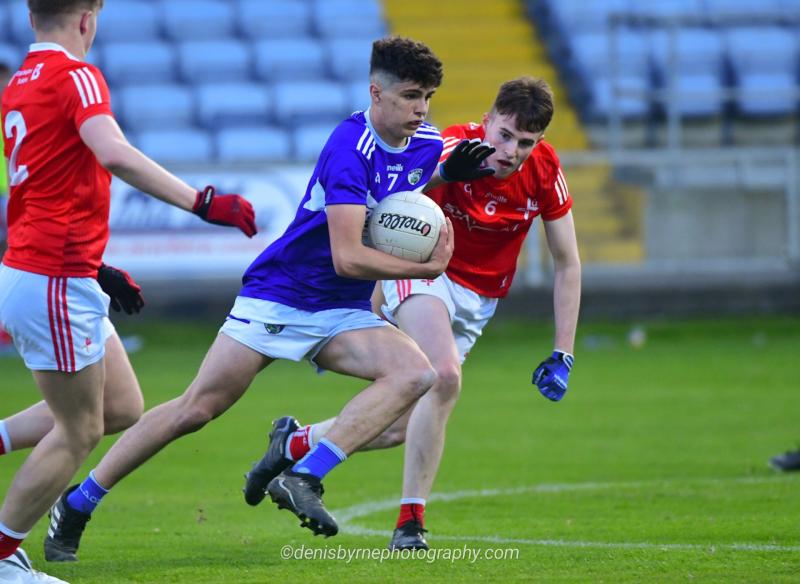 The Laois minors entered the final round of their group knowing a victory would guarantee them a spot in the last eight of the Leinster football championship. Conor Gorman's side had gotten the better of Westmeath in round one, before falling to a strong Dublin side.

Their opponents in O'Moore Park on Wednesday evening were Louth, who had lost to Dublin and Westmeath already and were destined to finish bottom of the group. The away side was the better outfit in the first half though, but some poor finishing meant they went in behind at the break.

David Costello’s first-half goal meant Laois went in with a two-point advantage at half-time. Both Costello and club minor teammate, Ryan Little, combined to score three goals between them to make sure Laois advanced through to the last eight of this competition.

Louth, in truth, played the better football in the first half here and should have gone in with a half-time lead. Their wing-forward, Diarmuid Reilly, kicked a point seconds after the throw-in, and James Sharkey doubled the away side’s advantage.

Laois settled down after a nervy start, as they scored four on the trot to take the lead themselves. Centre-forward Corey Geoghegan ran straight at the Louth defence before popping one over under pressure. David Costello then knocked over a free, with Ryan Little and Corey Geoghegan again showing some nice skill to place over more points from play.

Louth responded to that Laois run by kicking four in a row themselves. Darragh Dorian landed two points, as he showcased his pace, while Tadgh McDonnell and Diarmuid Reilly also raised white flags for the Wee County.

Laois again hit back, as their runners from deep were causing Louth issues. Jeremy Kelly strode up from wing-back to slice a nice point between the posts. Hugo Emerson then levelled after a clever handpass from David Costello before Jake Darcy kicked Laois ahead once more.

Louth’s Adam Gillespie looked dangerous in the first half, as he looked to take on Conor Raggett at every chance. Gillespie scored a point before he had a goal opportunity, which he blazed wide of the Laois net.

The impressive Jeremy Kelly kicked his second point to nudge Laois ahead, but Louth once again replied through two Adam Gillespie points. Laois were struggling to win their own kick-out, and if Louth had been more clinical up top, they would have found themselves behind at the break.

A piece of brilliance proved to be the difference between the teams in the first half. Laois’ David Costello handpassed to Ryan Little, who somehow managed to slide a low kick pass back to Costello. The Emo man made no mistake with the finish, as he crashed the ball past Louth goalkeeper Fionn McQuillan.

Stradbally man Fionn Mullaly McEvoy, who made his first start for the Laois minors in the championship this season, opened the scoring in the second half. Ryan Little then added another lovely point, before Little struck for Laois’ second goal.

A Louth kick-out was intercepted by Jake Darcy, who found Corey Geoghegan free inside. While Geoghegan’s effort was expertly saved by Fionn McQuillan in the Louth net, Little was on hand to fist home the rebound.

Illan Farrell got Louth on the scoreboard for the second half. Little was in flying form now though, as the Courtwood man once again showed nice skill to raise another white flag. Laois then struck for their third goal to kill the game off as a contest, with Little’s club teammate, David Costello, scoring his second.

Jeremy Kelly launched a high ball into the Laois full-forward line. Costello really had no right to win the ball, but he soared into the air to catch it before rifling one into the roof of the net.

Geoghegan and Little landed further points to stretch the lead before Laois scored their fourth and final goal. Geoghegan’s attempt for a point was blocked down by Louth, but unfortunately for them, the ball fell Little’s way and there was only one outcome from there.

Little pointed two more scores to his name, with centre-back Kevin Byrne also getting himself on the scoresheet for the night to stretch Laois’ lead. Substitutes Jack Behan and Tom Bride landed the last two scores of the match, as Conor Gorman’s men secured the points on offer in O’Moore Park.