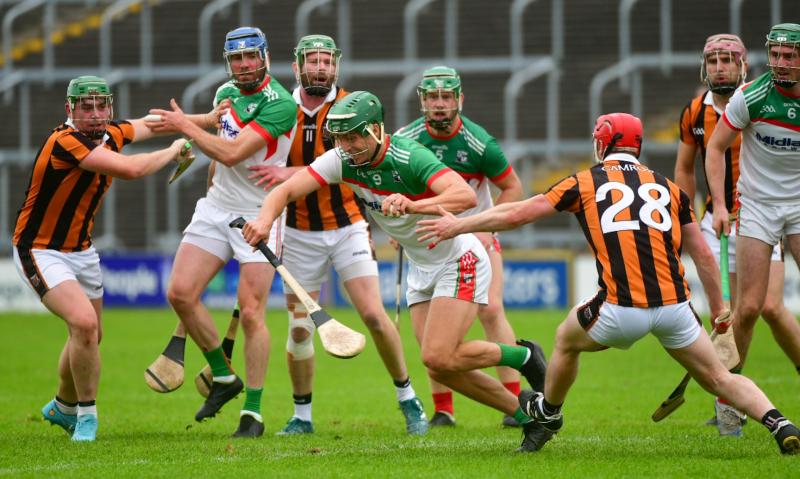 The second of the senior hurling semi-finals to be played on Sunday afternoon at O’Moore park was between Rathdowney Errill and Camross. Rathdowney Errill, similarly to the winners of the opening game Clough Ballacolla, advanced straight to this semi-final after topping their group. Camross eased past Borris in Ossery by a wide margin of 14 points to book their spot in this afternoon’s semi-final. Coming into the game many would have considered this matchup as the closest of the two ties.

Zane Keenan opened the scoring for Camross as he slotted over a free after two minutes. Keenan also got the second score of the game but then Camross immediately responded, A shot that fell short landed in the path of Eoin Burke who was on hand to knock it into the Camross net for Rathdowneys opening score. Rathdowneys dangerous forward Brandon McGinley followed up the goal immediately with a point.

Paddy Purcell and Odhran Phelan traded long-range scores. Jake Creagh took on a tackle and laid it off for Shane Dollard who edged Rathdowney ahead at the fifteen-minute mark. Then in a similar vein to their first goal, a long-range effort fell just short, but this time Eric Killeen was on hand to raise Rathdowney Erril’s second green flag, giving them a six-point advantage after twenty minutes.

Two pointed frees from Keenan, one of which was from miles out, brought the deficit back to four. Keenan continued to eat into the Rathdowney lead as his accuracy from the dead balls kept Camross in the game. Deep into injury time of the first half Camross’s Tomas Keyes made a dangerous run and laid it off for Daniel Delaney who finished it sweetly into the top corner of the Rathdowney net. This levelled the game and nothing separated the sides on the scoreboard at halftime

Rathdowney looked to be well on top for large parts of the first half. They were winning their battles all over the field. Rathdowney fell off it a little bit in the last ten minutes and Keenans tally of eight points and Delaney’s goal kept Camross well in the game.

Just as he did in the first, Keenan got the opening two scores of the second half with a 50” and a free. Ciaran Collier extended Camross’s lead to three with his first point before Mcginley hit back for Rathdowney with his second point of the afternoon.

The game got a bit spicy when Rathdowney Sub Ross King caused some handbags with Camross corner back John Purcell. This caused a melee of sorts and the ref settled the situation by handing out a yellow to King.

Keenan continued to slot over the frees and his score at the 45th-minute mark gave Camross a 6-point lead. That was quickly reduced as Mark Kavanagh got his first score after coming on as a sub five minutes earlier. Rathdowney then had a decent momentum run thanks to points from King, Kavanagh and O’Dea. Mcginley then got the equalizing score much to the delight of the strong contingent of Rathdoweny fans. Midfielder Palmer edged Camross in front once again.

Kavanagh and Keyes then traded points, leaving Camross a point ahead with 5 minutes on the clock. The additional time board went up with the number 6 displayed right before Kavanagh levelled the game. Mark Dowling was on hand though to squeeze Camross back in front immediately after. A limping Zane Keenan then scored his 14th point of the game.

Rathdowney had a very very late chance to. Padraig Rafter was fouled close to goal resulting in an 18-yard free. Rathdowneys hopes laid on Mark Kavanagh slotting it into the net. But Camross held their nerve and blocked the shot. An enthralling ending to an extremely exciting game that ebbed and flowed throughout. It’s Camross though who progresses to face Clough Ballacolla on the second of October.