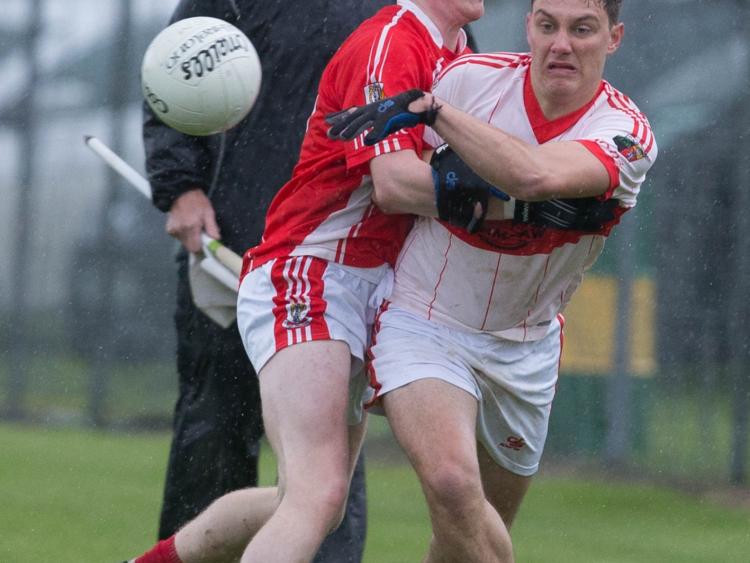 Nigel Murphy gets this pass away for Emo against Timahoe. Pic: Alf Harvey

The favourites for the Intermediate championship, Emo, looked in serious trouble in Rathenisak on Saturday after Timahoe took a six point lead at the break.

However, a mixture of experienced heads combined with the pace of Emo’s youth got them just over the line and into the county final, where they will play Portlaoise’s second team.

In the opening stages of this one Timahoe hit Emo with everything, to let the favourites know that they weren’t going to be easily beaten by any stretch. They rattled off the first four points, one from Robbie Foyle and three in a row from Ruairi O’Connor, who, only two weeks previous, scored five goals in one half against Courtwood.

Emo finally settled their early jitters, thanks to a Darren Strong point, and Paul Lawlor put over a free to reduce the gap to two.

However, Timahoe supporters had more reason to celebrate, as Conor Whelehan buried the ball into the back of the net, after a deft pass by full-back Jimmy Whelehan. Ruairi O’Connor added another, before Paul Lawlor pointed his second free for Emo.
Full-forward Paul Lawlor used his experience to turn the ball over close to the Timahoe goal, and he laid it off to Nigel Murphy, who nabbed his fourth goal of Emo’s championship campaign to get them back on track.

Ruairi O’Connor put over a free to keep Timahoe in pole position, and Michael Kennedy scored Timahoe’s second goal shortly after, as his shot dipped just under the crossbar and in.

Darren Strong and Ruairi O’Connor swapped frees before the interval, and Timahoe went in with a six point lead in a half, where they looked a lot hungrier than their opposition.

Emo came out at the break and got off to a very quick start, with Paul Lawlor converting his third free, before Brian Gorman came up with a much needed goal for Emo.

Ruairi O’Connor and Martin Bergin once again calmed Timahoe down, but Emo were starting to win individual battles all over the pitch. Paul Lawlor put over another free, before Emo grabbed their third goal of the game.

Timahoe failed to cope with the pace of the Emo attack, with Finbarr Crowley and Nigel Murphy running at pace, before Paul Lawlor fired home to level things up.