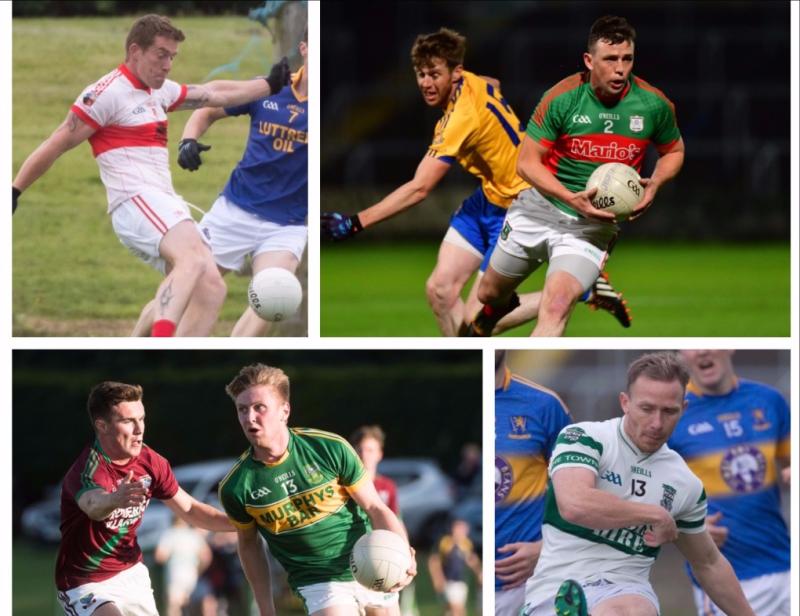 A busy weekend of football awaits this weekend.

This Sunday sees the Laois SFC semi-finals take place, and there are two really exciting games in prospect. Here, we take a look ahead to what lies in store.

The favourites for glory come up against one of the pretenders to the throne in the first game this Sunday, as Portlaoise face up to Graiguecullen.

Malachy McNulty's side were favourites to win this year's championship before a ball was kicked in the SFC, and little has happened since to change that perception. They have been composed, clinical and precise so far this season to a degree they didn't manage last year, and they have few obvious weaknesses.

Bruno McCormack is still a major threat up front, as shown by his haul of 0-4 from play last time out, while the new players this year have all settled in well. Frank Flanagan has done well at full-back, Chris Finn has now nailed down a starting position, while David Holland is looking more confident in the side too.

For Graiguecullen, they are coming into the game on the back of their best season since they qualified for the final back in 2011.

Padraig Clancy has breathed new life into the club, and they have responded enthusiastically. There were 43 players listed in the match programme the last day, not including Barry Brennan, who made an appearance too.

They have a style of play which suits them, as they pressure teams around midfield and the half-back line before breaking forward at speed.

They are the best team Portlaoise will have face this year, and should ask more questions of the title favourites than either Arles-Kilcruise or O'Dempsey's managed. Nonetheless, with the quality in the Portlaoise team, and the manner in which they are playing this year, it's hard to see anything other than a Portlaoise victory.

This will be the fourth meeting of the year between these teams, with Ballylinan having already won the most prominent of those games, the ACFL Division 1B final.

There was little between the teams on that occasion, and there's unlikely to be much between them this Sunday either. Both clubs have built exciting, young attacking teams over the last few years, although Portarlington's progress has been a bit more meteoric, after years of under performance.

Their win over Arles-Killeen in the semi-finals was impressive for a number of reasons. It was their third meeting this year against a seasoned Arles-Killeen side, but they retained the upper hand. When they stuck to playing the fast, attacking brand of football which has served them so well this year they were proving a real handful, even before Donie Kingston was sent off.

Sub Jordan Fitzpatrick then came off the bench to score two brilliant goals, and now they are back in the semi-finals.

Ballylinan were no less impressive in battling their way past Killeshin, a tough game in tough conditions which they showed a lot of character to win. They are no longer overly reliant on Gary Walsh for scores, and the development of Cathail Dunne and Andy McEvoy in recent years has made them a really dangerous team. Add in the size of Cieran Farrell, Jamie Farrell and Padraig McEvoy, and the mobility of Alan Farrell, and there is a lot to like about this Ballylinan team.

There is very little to chose between these teams, which will hopefully make for a really good game. Both are at their best when attacking, so hopefully they both go all out for the win rather than trying to sit deep and grind out a victory.

Ballylinan have a few match-winners in their midst, but Portarlington have probably been the better team overall so far, and have passed a few tougher tests too, so we'll give them a tentative nod here.

On Saturday evening, Emo's bid to return to the Laois SFC comes down to their re-match with Portlaoise.

Emo's bid to make an immediate return to the SFC ranks will come down to a difficult clash with Portlaoise in the IFC final this Saturday night.

This will be the second time this year the team's have met, with Emo emerging victorious by a five point margin - 2-13 to 1-11 - when the faced off in Round 2.

Since then, Portlaoise have bounced back with wins over The Rock, after a replay, and then Rosenallis in the semi-final, as they qualified for the IFC final for the first time since 2010.

Their prospects didn't look good at this grade before a ball was kicked, as injuries and absentees in the senior team looked like leaving them short handed.

Dean Cullen, Kevin Fitzpatrick, Shane Smyth, Frank Flanagan, Scott Lawless and David Holland would all have been featuring at this grade had there not been so many players missing from the senior team.

One of those players lost from senior level as been to the benefit of the intermediate team though, as Craig Rogers has been regraded. His game management and experience are a boon to this team, and has played a part in their success to date.

So has the form of other players, such as Jason Maher and Aaron Rafter, who have been hard to handle for teams in attack.

For Emo, it is sobering to think that just two years ago, they were minutes away from beating Portlaoise's first team to an SFC title. They looked like one of the coming teams at that stage, but they now find themselves trying to rebuild after a second relegation in six years.

They shouldn't find themselves in this position because they have some really talented footballers in the club. Nigel Murphy has been outstanding at wing-back for them in the IFC this year, proving to be one of their most potent attacking threats.

Paul Lawlor remains as influential as ever, probably more so now as he also doubles up as team manager, while Evan Costello, if he can get a break from injury, is one of the best forwards in this competition.

They are a young enough side overall, so a lot falls back on the experienced players like Lawlor, Darren Strong and Marc Carney.

Coming into this game as favourites should be no surprise to them, or no real issue either as they have been favourites in every game they have played this year.

Portlaoise are a really dangerous team to be facing, so a good battle should ensue. Having already beaten them, however, Emo know what is needed, and they should have enough in their locker to get back to the SFC ranks.

The curtain raiser to the IFC final sees Kilcavan take on a free-scoring St Joseph's team in the JFC final.]

St Joseph's will take on Kilcavan this Saturday evening in the JFC 'A' final, as they look to cap an impressive campaign so far with some silverware.

It has been a controversial build up to the final for the Kellyville outfit, who had the eligibility off veteran Laois suo Noel Garvan and Tom Kelly called into question after their semi-final win over Park-Ratheniska.

What followed was a request for clarity from Croke Park, a confirmation they were free to play, and condemnation from Colm Parkinson, with the Portlaoise man denied the opportuntiy to play for his club this year due to a different interpretation of the rule earlier in the year.

All of that was beyond St Joseph's control, and all they can do is stick to what they have been doing well in this year's championship, and that is beating teams.

'Beating' almost feels like a disservice when describing St Joseph's form so far, because they have been battering teams into submission.

They qualified from their group after winning all three games by an average of 14 points, and have shown no signs of letting up in the knockout stages.

They beat The Heath in quarter-final by ten points and Park-Ratheniska in the semi-final by eleven.

Kilcavan have impressed this year too, and their comeback against O'Dempsey's in their drawn semi-final will live long in the memory.

They are going to need that reslience and character this Saturday too, because St Joseph's will be a step above anyone else they have faced this year. It's nice to see a club's firs team do well at this grade, but it's hard to look beyond St Joseph's here.

Sarsfields contest their 12th county final in a row, as Portlaoise look for a first SFC crown this Sunday.

The curtain will come down on slightly bizarre Laois Ladies SFC campaign this weekend, as Sarsfields and Portlaoise meet in the final on Sunday evening at 5.30pm in Annanough.

It has been a long road to the final, owing to the appeals which beset the championship after the group stages. St Brigid's had appealed the final standings of the group stages, an appeal which was eventually upheld by the Leinster Appeals Committee.

That should have changed the final standings in the group phase, thus affecting who played who in the semi-finals, only for it to emerge that St Brigid's played an unregistered player earlier in the competition, and the pairings remained unchanged.

After all that, it was Sarsfields and Portlaoise who booked their places in the final, with this being the second year in a row they have met in the decider.

Remarkably, it is the twelfth year in a row that Sarsfields have contested the final, a remarkable display of consistency which shows little sign of slowing down, as they also contest the U-14 'A' final prior to this game.

They have been in typically devastating fashion so far this year, ripping through the group stage with some high-scoring victories.

They have four games played so far and have won them by an average of almost 17 points, so they are the hottest of favourites coming into the final.

When the teams met in the group stages, Portlaoise suffered a heavy defeat, 3-21 to 1-10, and they will have to hope they can avoid a similar fate here.

Sarsfields are the undoubted masters of this competition though, and if they hit anything close to top form they will win this final.