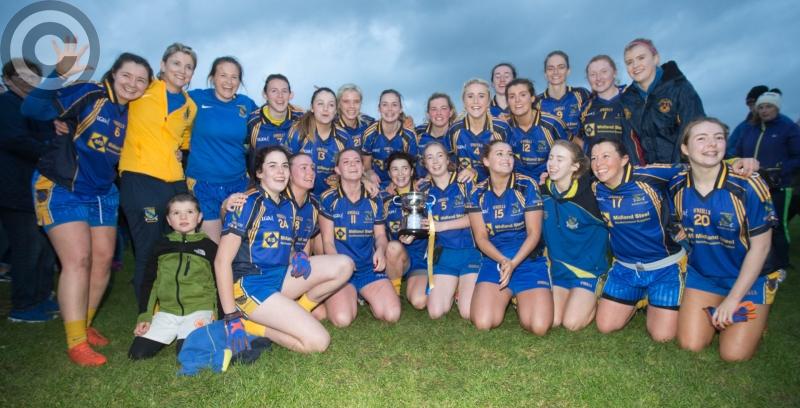 Even though Sarsfields were the favourites coming into the Laois Ladies Senior Football Final against Portlaoise, even they couldn’t have expected it to go as well as it did.

Portlaoise only managed their first score of the game with ten minutes to play, which is a credit to the tireless and hardworking Sarsfields defence and attack.

It was all one way traffic pretty much throughout. Portlaoise, who had reached the county final a year previous, where they were pushed Sarsfields all the way, adopted to play two sweepers and set up very defensively.

Sarsfields were awarded a penalty only two minutes in, but captain Aileen O’Loughlin blazed her shot over the bar, and had to settle for a point. Sarsfields brought their advantage out to three soon after, with points from the boots of Tracey Lawlor and Ciara Burke.

Portlaoise weren’t defending too badly, but they didn’t have enough pace to transition from defence to attack, which meant their two full forwards were starved of any service.

Sarsfields, who were misfiring a little bit for a period themselves, managed to maintain their pace with points from Ciara Burke and Aileen O’Loughlin mid-way through the first half. They found their groove approaching half-time, however, as O’Loughlin and Tracey Lawlor (frees) slotted over two apiece to leave them eight points to the good.

Nothing changed in the second half from a Portlaoise perspective, as points from Meaghan Dunne, Tracey Lawlor and Alison McEvoy had Sarsfields 0-11 to no score up with twenty minutes remaining.

Midfielder Tracey Lawlor was in exemplary form, as she added another from play, followed by a Ciara Burke point as we approached the last ten minutes in Annanough.

Portlaoise, to their credit, never threw in the towel, and Fiona Dooley finally got them off the mark with a lovely point.

However, Sarsfields immediately hit back with their first goal, Meaghan Dunne showcasing her lightning pace, and coolly finishing past Ciamh Dollard. It didn’t take long for one to become two, as Laura Marie Maher sold a beautiful dummy, before finishing through the legs of Dollard.

Alison Taylor grabbed Portlaoise’s second point, but Dunne and Lawlor (free) kept Sarsfields motoring. Julia Cahill pointed The Town’s third and last point, but Sarsfields put the icing on the cake with a third goal, substitute Yvonne Comerford the scorer on this occasion.