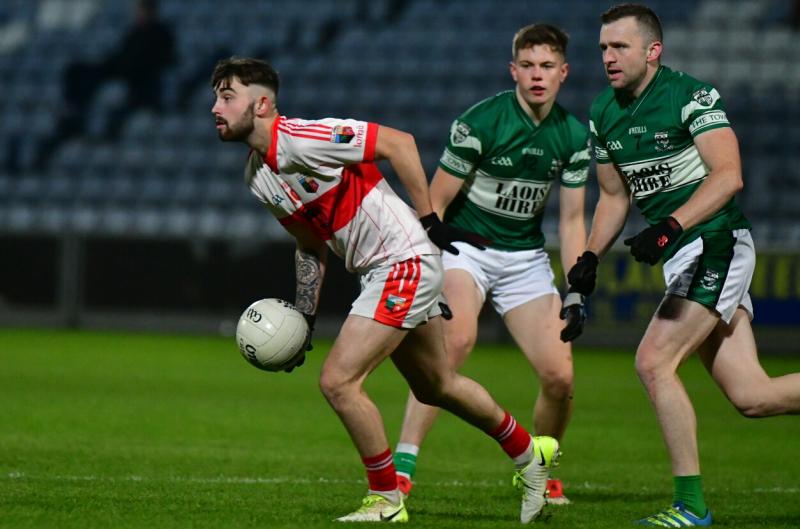 Cian Langford in action for Emo.

Emo are the Laois IFC champions for 2017, after they got the better of Portlaoise in this entertaining replay at O'Moore Park.

Two goals within a minute of the second half starting were key for Emo, with player-manager Paul Lawlor scoring both to give his team control of the game. Portlaoise battled ferociously hard to get themselves back into, and they did so with a couple of goals themselves in the second half, but Emo had done enough to earn the win.

After the high drama that surrounded the end of the last game, this one started in a bit of a whirlwind as well. With barely two minutes played, a misplaced kickout from Emo 'keeper David Whelan went straight into the grateful arms of Jason Maher, and he raced back in Whelan's direction before blasting the ball to the net.

A minute later, and Portlaoise were gone further ahead, as Martin Staunton made space for himself 30 yards from goal and calmly slotted over, as Emo seemed all at sea.

They finally settled down after that, with Evan Costello stroking over a free from the left side to get his team up and running. Three minutes later they were back level, with David Gorman scoring almost a carbon-copy of his dramatic effort in the drawn game.

Nigel Murphy's shot for a point from the left wing hit the post and bounced back into the penalty area, where Gorman scooped up possession and was left with a simple finish from a couple of yards out.

That left the teams level at 1-1 apiece after just seven minutes of play, but sadly the scoring rate dropped after that, with both teams guilty of some poor play.

Emo edged ahead with a fine point from Niall Wheeler, and Portlaoise should have hauled themselves level, or even gone ahead, but were let down by poor shooting time and again.

Finbarr Crowley then barreled his way through a few tackles and pointed from close range for Emo to send them two ahead, but Craig Rogers responded with a free for Portlaoise. That score came in the 19th minute, and that would prove to be the last score of the half, as Emo held a slender advantage at the break, 1-3 to 1-2.

With most of the first half having been devoid of much quality or action, the second was a much different affair, and it exploded into life. With barely ten seconds played Colin Finn made a wonderful last-ditch block to deny David Gorman a goal, but he managed to square the ball to Paul Lawlor, who tapped home from close range.

Before the opening minute of the half had elapsed, Lawlor had a second goal, as he blasted home from ten yards out, and game had been turned on its head. Padraig Kirwan added a point and it looked like Emo had taken control of the game, but Portlaoise managed to keep themselves in the hunt.

Jason Maher's shot for a point dropped short, and Oisin Fitzpatrick was on hand to claim possession, round David Whelan, and tap to the net. Emo scored four of the next six points to open up and eight point lead, but Portlaoise again found a way to hang on.

Ronan McEvoy's shot from the right wing dropped short, and Shane McManus, who was only on the field as a blood sub, got a hand to the ball and flicked it to the net.

To Emo's credit they responded well to the goal, and points from Darren Strong and Paul Lawlor left them seven clear with seven minutes left.

Try as they might, Portlaoise just couldn't bridge that gap, with Jack Brown's point from a 14 yard free their only reward late in the game, as Emo wrapped up the win.