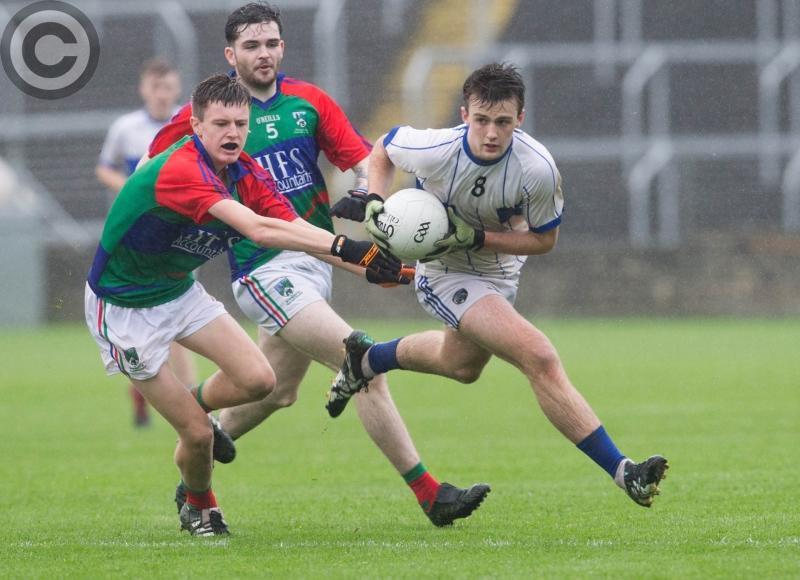 Emo-Courtwood-The Rock are the Laois U-17 'A' football champions, after they proved too strong for Stradbally Parish Gaels in O'Moore Park on Sunday.

Their attacking duo of Niall Dunne and Matthew Byron were in outstanding form on the day, scoring 3-13 between them as Stradbally Parish Gaels just couldn't keep them at bay, even though they played well themselves in patches.

Emo-Courtwood-The Rock came into this game as favourites, and were justifying that tag early on as Niall Dunne pointed twice in the opening two minutes.

Stradbally Parish Gaels looked to be in trouble early on, but they took the lead soon after with the opening goal of the game. With the weather conditions making it difficult to gain possession, the a long ball into the Emo-Courtwood-The Rock penalty area went unclaimed. With the ball almost over the line, an Emo-Courtwood-The Rock defender managed to get in an attempted clearance, but it bounced off Ciaran O'Neill and rolled into the net.

That score was exactly the fillip Stradbally Parish Gaels needed, but Emo-Courtwood-The Rock responded well, as Jack Owens quickly brought them level. Matthew Byron then pushed them in front, and they kept building on that lead all the way to half time.

Dunne chipped in with his third of the game, and even though Mark O'Connell replied for Stradbally Parish Gaels, the men in blue and white were hitting their stride now. Seth Mooney saw a powerful shot for goal flash across the square, before Niall Dunne eventually did raise a green flag. He picked up the loose ball on the edge of the square after a number of players had gotten tangled up contesting it, and he finished to the top corner for a well-taken goal.

Dunne would add two more before the break, and with Owens and Byron also hitting the target, it meant Emo-Courtwood-The Rock were leading 1-9 to 1-1 at half time.

Everything looked rosy for Emo-Courtwood-The Rock at half time, but credit to Stradbally Parish Gaels, they came roaring back into the game on the resumption of play. Damien McCaul got them up and running with a free, before Killian Horgan put Mark O'Connell through on goal, and his precise finish found the bottom corner.

O'Connell then followed that up with a free, and Stradbally had managed to cut the deficit to just three points with a little over four minutes of the second half played.

To the credit of Emo-Courtwood-The Rock, they maintained their composure, and slowly regained control of the game. Matthew Byron calmly slotted over a couple of frees, before Niall Dunne pounced on a mistake in the Stradbally defence to score his second goal.

Another Byron free and Emo-Courtwood-The Rock were now nine clear, and in a very strong position heading into the last fifteen minutes of the game.

That position proved unassailable for Stradbally Parish Gaels, as Matthew Byron controlled the remainder of the game for Emo-Courtwood-The Rock, chipping in with a handful of points before blasting in their third goal to wrap up a well-deserved win.