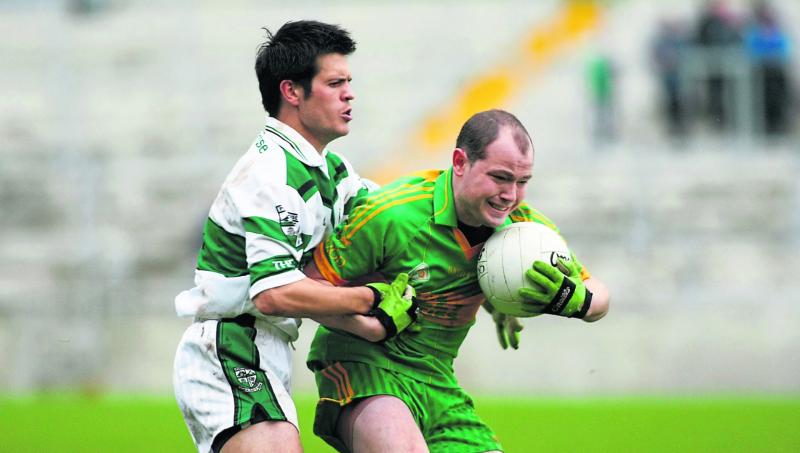 Portlaoise manager Malachy McNulty in action against Rhode when the teams last met.

Portlaoise will launch their latest bid for provincial glory this weekend, as they head to O'Connor Park to take on Offaly champions Rhode in Tullamore.

It is a very difficult opening round for Portlaoise, with Rhode having established themselves as one of the elite club teams in Leinster outside of Dublin.

Portlaoise, of course, are in the same category, and both Portlaoise and Rhode have been the losing side to the Dublin champions in the last five Leinster finals.

The teams have a lot in common, and that's why this Sunday's game promises to be one of the most intriguing games on the club scene over the weekend, as it appears a very tough one to call.

Rhode, backboned by a handful of Offaly stalwarts like Niall and Alan McNamee, Anton Sullivan and Brian and Niall Darby, have been ruling the roost in the Faithful County for some time.

They have won nine SFC titles since 2004, and have a strong record in the province too. Much like Rathdowney-Errill did in the Laois SHC, they hit a groove of winning the Offaly championship every second year, and they turned a lot of those victories into Leinster final appearances.

The major threat facing Portlaoise comes in the guise of Niall McNamee, the outstanding Offaly footballer of his generation. He scored eight of their twelve points in the county final win over Clara, and has been leading the line for them since he made his debut as a 16 year old.

Portlaoise have chosen to man-mark when necessary this year, and with Kieran Lillis having been detailed to snuff out the threat of Gary Walsh in the SFC final, he'll probably be sent out to do a similar job this Sunday. A lot will rest on that for Portlaoise, as McNamee can decide games on his own, when he'd in the mood.

At midfield, Alan McNamee is still lining out for Rhode, and he will have his hands full against the big, mobile Portlaoise duo of Ciaran McEvoy and Adrian Kelly.

Paul Cahillane remains the scorer-in-chief for Portlaoise, and he is likely to be the focus of some man-marking too by Rhode manager Paschal Kelleghan. Like Malachy McNulty, he is a former player turned coach, working with a number of players he would have lined out against.

He has experience of beating Portlaoise too, having scored an audacious lob against them in a 2-9 to 1-10 win for Rhode when the teams last met in Leinster, back in 2008. The only previous meeting before that was when Portlaoise cruised to a 1-13 to 0-4 win back in 2004, on their way to a Leinster title and All-Ireland final appearance.

The worry for Portlaoise, as we often have for them when they go into Leinster, is whether they have been sufficiently tested in Laois. For the most part they had all their games in the Laois SFC won by half time.

Ballylinan gave them a stern test for some of the final, but they have yet to be put to the pin of their collar down the home straight.

This game doesn't look like being one-sided, because the teams appear too well-matched for that, but it will ask tougher questions of Malachy McNulty's side than has been posed so far.

They will need the experience of Brian McCormack, Conor Boyle and Kieran Lillis this Sunday, and can at least take comfort from knowing their big players rarely go missing when they are needed.

If they can keep McNamee curtailed as much as possible, then it certainly gives them a huge advantage. Rhode will be a tough team to play through, so Bruno McCormack's nous will be vital, and they may want to bring him further out the field than normal to get him on the ball and keep them moving in the right direction.

A really interesting game awaits this Sunday, and we'll back a fresh and eager Portlaoise team to handle the best Rhode can throw at them, and eke out a narrow victory.