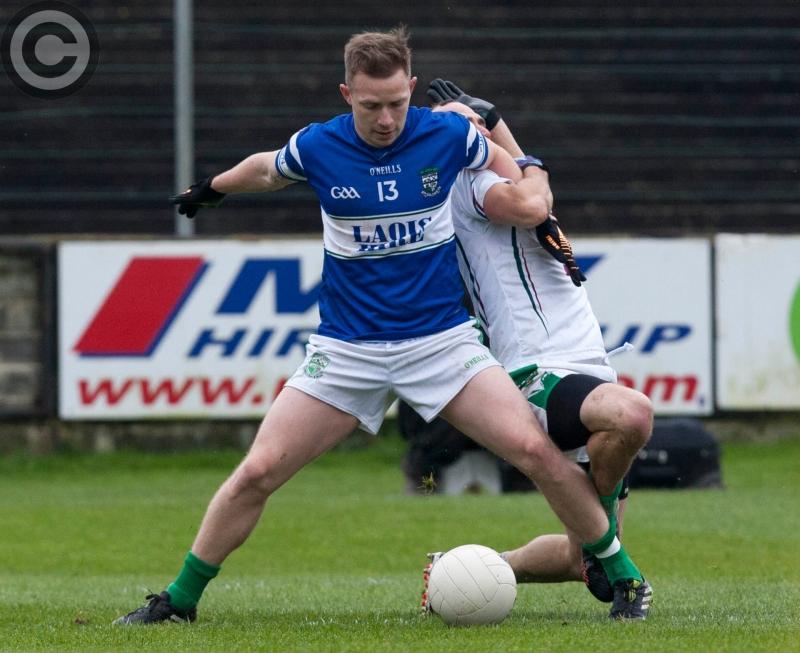 Portlaoise will step back into the Leinster Club SFC this Sunday, as they welcome Kildare champions Moorefield to O'Moore Park in their quarter-final clash.

After withstanding a second-half comeback against Rhode last time out, it will be another tough challenge for Portlaoise this Sunday against an experienced Moorefield team.

It is the third time the teams have met since 2010, with Portlaoise having won the other two as Moorefield hope the old adage of third time being lucky rings true.

They have their own problems coming into the game, as they lost both Daryl Flynn and David Whyte to straight red cards in the Kildare county final, meaning they are without both due to suspension this Sunday.

Flynn and White are captain and vice-captain respectively, so they are obviously key players for Moorefield, and while it would be tempting to suggest they are on a road to nowhere without them, you only have to look at the Kildare county final to see what they are capable of.

Both players were sent off midway through the first half of that game, and still Moorefield managed to grind out the victory. They were only two points ahead, 0-3 to 0-1, and had just missed a penalty before Flynn was sent off, but they managed to lead 0-7 to 0-2 at half time.

They even went six ahead in the second half, and then hung on for a hard-fought two point win over a strong Celbridge outfit, so there is no doubt that even without those two players, Moorefield pose a serious challenge to Portlaoise's hopes of progress.

Both teams have undergone their fair share of transition since the last meeting back in 2013, with only seven of the Portlaoise players who featured on that occasion likely to start this Sunday.

Moorefield, meanwhile, have since seen their ranks boosted by the arrival of Eanna and Cian O'Connor, sons of former Kerry manager Jack O'Connor, after they both got jobs teaching in Kildare back in 2014.

They have certainly boosted the Moorefield arsenal, and Eanna scored 0-4 in the recent Kildare county final. Add in the likes of Adam Tyrell and Eddie Heavey and the Portlaoise defence will find themselves in for a difficult afternoon.

Unlike Rhode, who boasted one marquee forward, Moorefield are probably a bit more balanced, and will provide a more consistent threat than Rhode managed.

The big area of concern for Portlaoise coming out of the Rhode game was their alarming second half performance, as they went over twenty minutes without a score, allowing Rhode the time to build up some confidence and get back into the game.

With each passing round the opposition gets a bit better, and a period of inertia such as that will be punished in a more emphatic manner.

Having come through the Laois SFC with relatively little trouble, perhaps it was no great surprise that Portlaoise would struggle a little with the step up in class in Leinster, but they didn't initially, as they sliced through Rhode at will and were by far the better team. That their poor spell came after playing so well is the most surprising thing, and will no doubt have occupied the mind of Malachy McNulty since last Sunday, as he tries to make sure it doesn't happen again.

Some of the unknowables before that Rhode game, such as how Portlaoise's younger players would react to interprovincial fare, have at least been answered, and they all coped admirably. Some have been very busy since though, with Frank Flanagan, as a dual player, having played three U-21 games in six days between Tuesday and Sunday, so hopefully he suffers no ill-effects from that.

There is no reason to suggest Portlaoise can't, or won't, win this weekend, provided they are well prepared and have addressed the problems which flared up in the second half of the Rhode game.

Craig Rogers made a huge difference when he was introduced the last day, helping to calm Portlaoise down and keep the ball, and it remains to be seen whether he is given a start, or kept in reserve to repeat that trick if he's needed.

Bruno, as ever, is the key man in the forward line, and getting him on the ball almost always leads to something positive, so they'll have to make sure Moorefield don't curtail him too much, although he's unlikely to be afforded the same freedom Rhode gave him.

Home advantage should help Portlaoise a little bit, but what it ultimately comes down to is whether they have improved on the last day. They will surely have spoken about it and addressed it in training, so if they are in the right frame of mind, they should get the win.