GAA - Agony for Portlaoise as late, late point sees them lose out to Moorefield 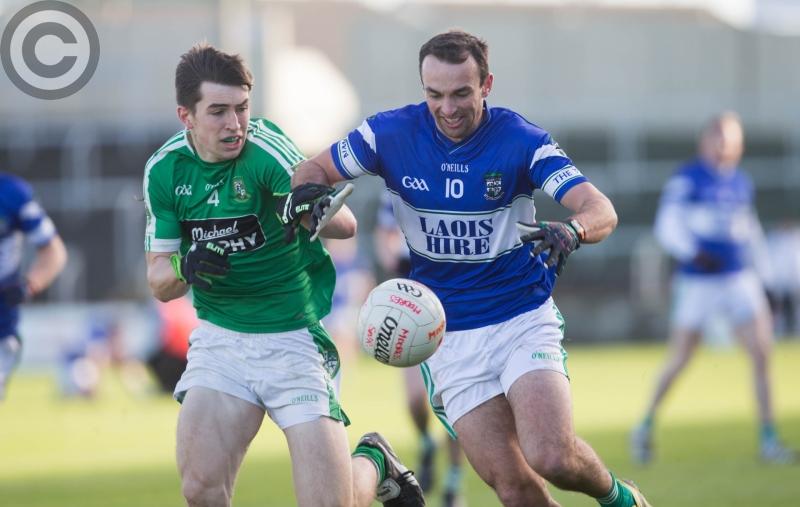 Gareth Dillon on the attack for Portlaoise. Pic: Alf Harvey

Portlaoise are out of the Leinster Club SFC, after a late, late point from Moorefield saw the Kildare side claim the victory in O'Moore Park.

In a closely-fought battle throughout, Portlaoise looked to have done enough for the win when they lead by three points with five minutes left. However, a goal from Eanna O'Connor and a point in injury time from Niall Hurley Lynch denied them a place in the semi-final.

Portlaoise almost got the perfect start when Kieran Lillis found David Holland on his own ten yards out, but his shot blazed over the bar for a point. Eanna O'Connor replied for Moorefield at the other end after jinking away from Brian Mulligan, but Brian McCormack soon had Portlaoise back in front.

Graham Brody then came up to kick a 45 for Portlaoise as they went two ahead, but Moorefield wrestled control of the game for a spell after that. The impressive O'Connor kicked two frees to draw them level, before midfielder Aaron Masterson put them ahead for the first time with a point in the 14th minute.

Portlaoise finally kicked back into life when quick-thinking from Brian McCormack set Scott Lawless up for a point, but Moorefield were soon ahead again thanks to Eanna O'Connor. That was the trend in the game for the next few minutes, as Portlaoise would draw level only for Moorefield to get their noses in front once more.

It wasn't until the final minute of normal time that Portlaoise managed to regain the lead, as Brian Mulligan and Scott Lawless pointed in quick succession. Graham Brody then pointed his second 45 of the half, and Portlaoise lead 0-9 to 0-7 as the teams headed to the dressing rooms.

The second half was a bit of slow burner, with only one point in the opening ten minutes of play, that coming from Cian O'Connor to get Moorefield within a point. There was much more happening off the ball, as a number of scuffles broke out across the field, with David Coldrick having to issue a number of yellow cards.

When a bit of normality finally resumed, it was Portlaoise who scored next when Paul Cahillane launched one over from distance, before a Scott Lawless free gave them their biggest lead of the game at three points, 0-11 to 0-8, with 15 minutes to go.

Portlaoise should have built on it, as Moorefield seemed to lose their way for a spell after that, but the game was thrown right back into the mix with five minutes left. First, Craig Rogers was sent off after receiving a black card to go with an earlier yellow, and that gave Moorefield a boost.

Then Eanna O'Connor, who had been kept quiet for much of the half, burst through on goal before firing home from a tight angle to level the scores.

That set up an incredibly tense ending to the game, as both sides needed to find a winner, but had to be careful not to be the architects of their own downfall. With four minutes of added time indicated, the pressure rose ever higher, and it was Moorefield who managed to fashion a winner.

Niall Hurley Lynch cut in from the left wing, and his curling shot just about dropped over the crossbar, sending the Moorefield crowd into raptures.

There was still time for one last Portlaoise attack, which yielded them a tough free from out near the right sideline. Paul Cahillane took it, but his shot went inches wide, as Moorefield held on for a narrow win.