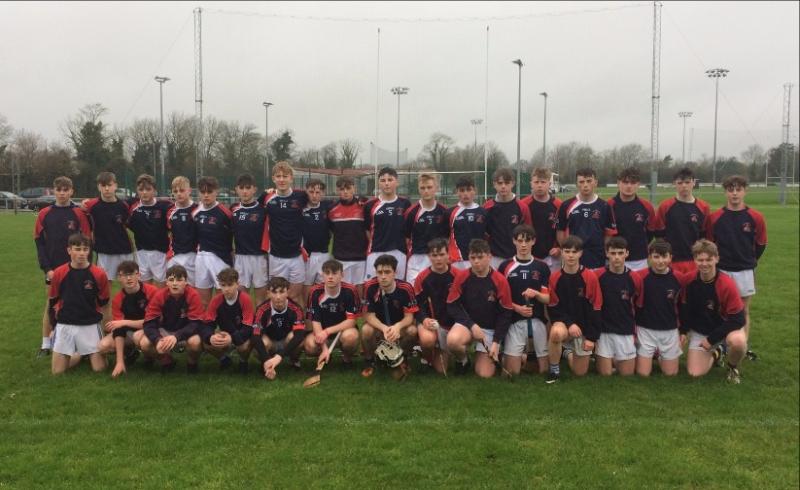 The Mountrath CS team which contested the Leinster final on Tuesday.

Mountrath CS junior hurlers were denied Leinster glory on Tuesday afternoon, as they lost out to Dublin side Colaiste Eoin in the provincial final at Ballykelly.

The Laois school were the better of the two teams in the first half, and looked to be heading to half time with a two point lead, only to see Colaiste Eoin score a fortuitous goal. That gave the Dublin side a boost at the right time, and they would dominate much of the second half before having to weather a late revival from Mountrath.

Gearoid Williams had given Mountrath an early lead, as he landed a 65 in the eighth minute, but Padraig O Luinneachain responded with a point for Colaiste Eoin soon after. The same played then put Colaiste Eoin in front with a free, but Adam Kirwan's did likewise for Mountrath to leave the teams deadlocked after 15 minutes, 0-2 each the score.

Mountrath started to get on top after that, as a wonderful bit of skill from Kirwan allowed him to win possession and point from 30 yards out. Noah Quinlan added another as they doubled their lead, and both teams managed two more points apiece to leave Mountrath two ahead with normal time elapsed.

The last act of the half was a bad one for Mountrath though, as a free from Padraig O Luinneachain evaded everyone in the Mountrath penalty area and bounced to the net, as Colaiste Eoin lead 1-4 to 0-6 at the interval.

The Dublin side came out strongly at the start of the second half, hitting three points without reply to go four ahead. Killian Kirwan replied with a superb point for Mountrath, but Colaiste Eoin had upped their game across the field now, and were very much in the ascendency.

A brilliant bit of skill from Dara Puirseil set him up for a point, and four more in a row saw them eight clear, and all looked lost for Mountrath.

To their credit though, they dug in and tried to launch a comeback. Adam Kirwan pointed twice in quick succession to give his side a boost, and then his picked up the break from a Noah Quinlan ball into the square to rifle a shot to the bottom corner.

Now just four behind with three minutes left, Mountrath had given themselves a late ray of hope, but a goal injury time from Colaiste Eoin rounded off the victory for them.