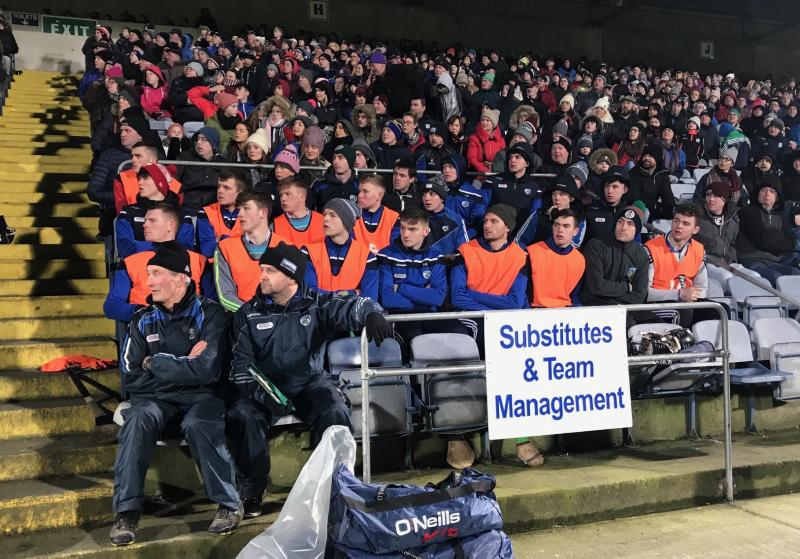 The Laois bench watching on against Galway on Saturday night.

Laois lost out to Galway in a brilliant battle at O'Moore Park tonight, as Eamonn Kelly's charges pushed the Tribesman all the way.

For the second week in a row the All-Ireland champions found the going tough against inferior opposition, as Laois put Galway to the pin of their collar at times in this game.

They lead for long spells of the first half, and were within a score of Míchael Donoghue's side for most of the second as well, until a late flourish from the visitors gave them a margin of victory they didn't really deserve.

After their lacklustre display against Antrim the week before, Galway needed to start strongly to show that was just a once off, and that was exactly what they did. With a little over two minutes played, Davey Glennon won the ball on the left wing and raced through the Laois defence, before offloading to Conor Whelan, and the Kinvara man made no mistake.

Laois could have buckled at that stage, but with a strong wind at their backs, they showed a lot of maturity to work their way back into the game. Eric Killeen pointed from the right wing, and then two points in two minutes from captain Ross King brought them back level.

With Galway struggling to find any fluency after their early goal, Laois kept pushing forward and went ahead with King floating over 65.

That finally prompted a response from Galway, and they flexed their muscles a bit as Aidan Harte, Davey Glennon and Padraig Breheny rattled off three points between them in three minutes, as they took control of the game once more.

King lead the Laois revival once more, as he fired over a free and Willie Dunphy scored from play to push Laois into the lead. The home side were starting to get on top in midfield now, but should have been further ahead, with Ben Conroy and Neil Foyle wasting good goal chances.

As the half ticked towards stoppage time, a scuffle broke out in midfield, the result being that Greg Lally given a straight red for Galway, and James Ryan getting a second yellow, and red, for Laois.
That flashpoint suited Galway, and from being three down, 0-10 to 1-4, they scored 1-2 in added time, Whelan again providing the goal, as they lead 2-6 to 0-10 at the interval.

With wind advantage, Galway were expected to pull clear now, but again Laois refused to buckle, even after Galway extended their lead to three early in the half.

Lead by the outstanding Ross King, they continued to bring the fight to Galway, who were just about managing to pick off enough scores to stay ahead. Conor and Joseph Cooney were to the fore here, but they were far from their brilliant best.

It fell back on their half-back line a few times to bail them out of trouble, with Padraig Mannion's free taking and Aidan Harte's accuracy from long range resulting in some timely scores.

With Laois unable to provide enough support to King, they eventually ran out of steam, but it was still a commendable effort from a side in the midst of an injury crisis.