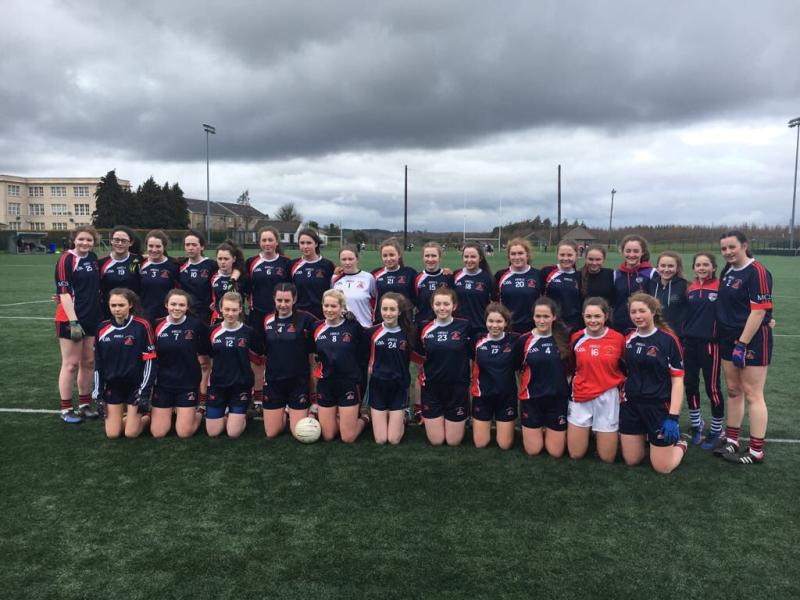 The Mountrath CS team which lost out to Kilcock.

A goal in the final minute of normal time left Mountrath CS heartbroken in St Loman's, Mullingar on Friday, as they were edged out for the South Leinster JFC title by Scoil Dara Kilcock.

It was a cruel way for the game to end for Mountrath, who had looked dead and buried after twenty minutes, but roared back into the game after that. They scored four goals, two each either side of half time, to turn the game on its head, and the least they deserved for that comeback was a draw.

However, sport is notoriously unsentimental, and when Mary Kate Lynch's shot hit the stanchion in the final minute of normal time, it rebounded into the arms of Leah White, who got the game-winning score.

The Kildare school had looked in ruthless form in the early stages, getting a goal as early as the second minute. Mountrath 'keeper Chloe Cuddy saw the ball pop out of her possession as she tried to field a high ball into the area, and Caoimhe Slattery bundled the ball over the line.

Less than a minute later Cuddy was called into action again, as she made a brilliant save to deny Slattery a second goal. That would be one of many saves Cuddy made in the game, as she was in inspired form for Mountrath.

Emma Kealy saw a good shot for a goal saved at the other end as Mountrath searched for their first score, and the dangerous Aoife Rattigan added a point for Kilcock soon after. Then came their second goal, when midfielder Leah Quinn jinked her way through and finished powerfully from close range.

Caoimhe Slattery and Aoife Rattigan added further points, and with twenty minutes gone Kilcock lead 2-3 to 0-0, and they looked like they were going to run away with it. However, Mountrath CS showed tremendous courage to fight back from that position.

A mix-up in the Kilcock defence saw them score an own-goal, and that was the lift Mountrath needed. A minute later, full-forward Sinead O'Rourke unleashed a powerful shot that the Kilcock 'keeper couldn't keep out, and now Mountrath were within three.

Jessie Quinlan added a point to narrow the gap further, and then midfielder Aine Cuddy was denied a goal late in the half when her low shot was turned around the post by Olivia Zawadka.

At half time Mountrath trailed 2-3 to 2-1, but Kilcock jumped off to a bright start in the second half as they hit two quick points to go four clear.

However, Mountrath would have their best spell of the game after that, starting with a point from Emma Kealy, after great work by Kirsten Keenan to set her up. Captain Keenan was involved again moments later when her ball into the full-forward line found Dervla Grehan, and she made no mistake a clinical finish to draw Mountrath level.

A minute later, Aine Cuddy's line ball again ended up in Dervla Grehan's arms, and her shot off the outside of her right boot nestled in the bottom corner. Mountrath had now achieved a twelve-point turnaround, as they lead for the first time.

Chloe Cuddy did brilliantly soon after to turn a loose ball in the area out for a 45, but Kilcock did manage a point back through Aoife Rattigan.

The same player then unleashed a long-range shot for a point which snuck under the crossbar, as Kilcock reclaimed the lead in a pulsating second half. Mountrath again showed their mettle by working a brilliant point from Aine Cuddy to draw level, and that left the game finely poised in the closing stages.

Mountrath had a couple of chances to edge ahead, but luck was to desert them late on. Leah White's goal left them with little time to draw level, as both teams managed one more point each to see Kilcock emerge narrow winners.