"It is not a sacrifice, I do these things because I really enjoy playing for Laois" - Ross Munnelly 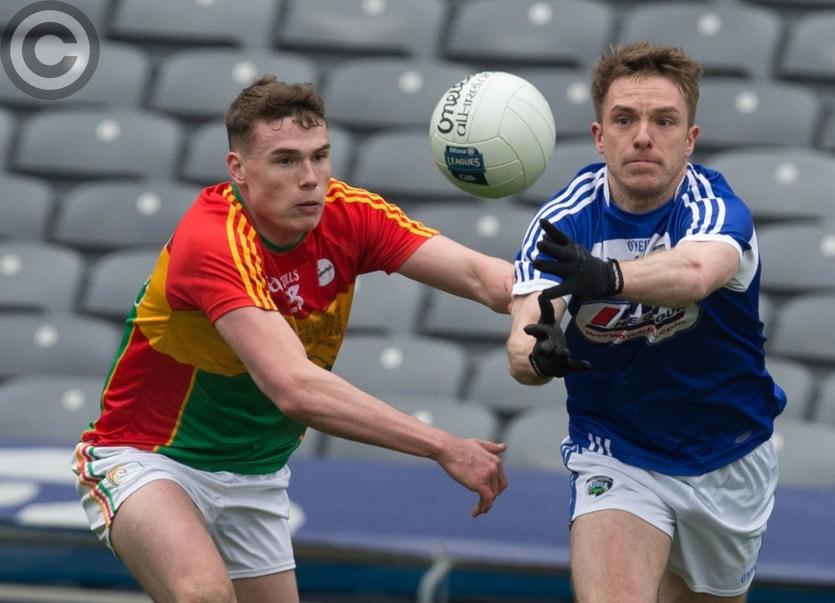 Laois senior footballer Ross Munnelly spoke of his love of playing for Laois after he inspired his side to a four point win over Carlow in Croke Park on Saturday.

Munnelly was part of the last Laois senior football team to win a trophy, the 2003 Leinster SFC title, and in his 15th season as an intercounty footballer, he shows no signs of slowing up. He scored 0-4 on Saturday and was a huge influence on the Laois performance.

Speaking to the media after the win, the Arles-Kilcruise man was asked how he kept producing top performances at this level. "I mind myself. I've always said that playing for Laois was my priority, not just nine months of the year but all 12.

"It is not a sacrifice, I do these things because I really enjoy playing for Laois. From my perspective, it is far too long since we won a trophy and although it is Division 4, it is important to get silverware and it is important for the group of young players in there to come to Croke Park and win.

"It goes back to 2003 since I won a medal with Laois. So it is significant and a lot of the Laois players had never played a game in Croke Park before.

While some players his age need to be moved onto an individualised training plan, or are unable to keep up with the training workload, none of that is the case for Ross. "There are no different rules for me. I was straight back in the first day of pre-season and anything the 18-year-olds are doing, I'm doing. The important thing is minding yourself outside of training and I'm lucky that I can do that."

As for the game itself, it was a much improved Laois performance from the one against Carlow just six days earlier, and Munnelly was delighted that his side were able to initiative their game plan on the day. "We had a style of play that we wanted to roll out today and we played accordingly given how defensive Carlow were.

"We came out today and stuck to our guns. We were able to penetrate a little bit more and we got the scores on the board to give ourselves a cushion.

"Then towards the end, we were able to enjoy that cushion and move the ball around to wait for them to come back out because there's no point in playing into their hands and let them counter attack.

"The real important thing for us is that we went through the league unbeaten. We got silverware at the end of it.

"But we're realistic. The Leinster championship, particularly towards the end of it, is really cut throat stuff and we'd want to improve over the next few weeks to get ready for that."

While the league success is a nice reward for the team's form over the early part of the season, Munnelly has learned enough in his fifteen years on the panel to be wary of reading too much into their results so far. "Laois are in a good place but we are realistic. That was a Division 4 title and we have played nobody who is of Division 3 quality so far.

"So Wexford are going to be a step up based on their league rankings at the start of the year.

"Wexford will be gunning for us, they will be disappointed with their league form and it is two teams who will be desperate for a Leinster championship win and we will look no further than that."