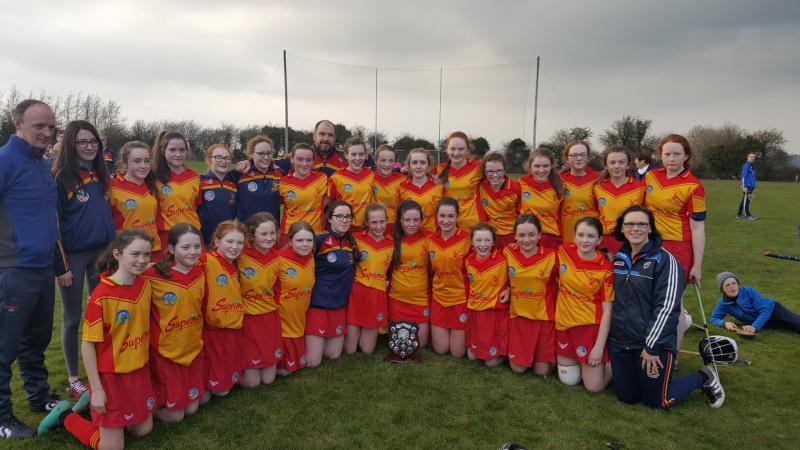 The Harps team with their trophy after defeating Portlaoise.

Ballypickas GAA was the venue for the Laois Feile Final between The Harps and Portlaoise on Friday evening last.

The Harps entered the final as underdogs given that Portlaoise were top of the table after the group stages, with The Harps in second place. This was a repeat of last year's tense feile final which resulted in a one point to no score win, with Portlaoise coming out as winners.

Conditions were good in Ballypickas and there was very little wind. The Harps started strong with Rachel Deegan testing the Portlaoise keeper in the first minute. A good block by their keeper and pressure from their defence resulted in a free out for Portlaoise.

The Harps and Portlaoise had to battle hard in the midfield area with plenty of skill and determination on show by both teams. Emma Delaney and Aisling Townsend were strong in the centre and kept the ball moving into The Harps forwards. Katie Healy and Amy Lacey were on top form also winning plenty of ball and sending it into the full foward line.

Eventually, four minutes in, Emma Delaney struck a high ball in only to see it fall into the back of the net. This seemed to enliven the Portlaoise players and good interlinking play between Aoibheann Dalton and Alice Kerins launched their first attack which resulted in a wide.

More pressure from Portlaoise, upon the puck out, earned them a free which enabled Louise Corrigan send in another low shot but it just flew to the right and wide. Again another Portlaoise free sailed wide.

The Harps backs fought well and eventually The Harps started to gather momentum. In the seventh minute a good clearance by Emma Delaney found Amy Lacey who passed it onto Lucy O'Connor. O'Connor sent in the shot but it was cleared for a 45. Portlaoise dealt with the 45 well but in the eleventh minute Lucy got on the end of another strike only for it to go wide.

Just before half time, hard work by Rachel Deegan earned The Harps a free which was confidently sent over the bar by Delaney. This left Harps 1-1 to Portlaoise 0-0 at half time.

Portlaoise started the second half strong but Cara Henderson, Abbi Gibbons, Kayla Dwyer and Ella Henderson were composed in their play and conceded nothing. Una Brophy cleared line after line and Rachel Deegan was flawless in her play as she won a lot of ball in the midfield area. However, five minutes in, a long clearance by Aoibheann Dalton into the Portlaoise forwards found Rachel Byrne who finished it to the back of The Harps net.

It was a tense final ten minutes. Every possession was vital for either team as one more score could be the winning of the game. Lucy O'Connor worked hard and won a free in for The Harps at a vital time.

The Portlaoise backs dealt with the attacks well with Ciara Crowley defending well for them. Alice Keirns got on the ball in the eleventh minute and soloed through the centre splitting the Harps defence. Full-back Ella Henderson had no choice but to meet her where she managed to overturn the ball. This marked Portlaoise's last attack.

The last few minutes were spent with The Harps testing the Portlaoise full back line but no score was to come. However, it wasn't needed as The Harps girls jumped for joy upon the final whistle.

The Harps will now go on to represent Laois at National Feile. Sixteen years ago, in 2002, was the last time The Harps represented Laois as A winners in Feile. Their host club will be Ahascragh Caltra of Galway.