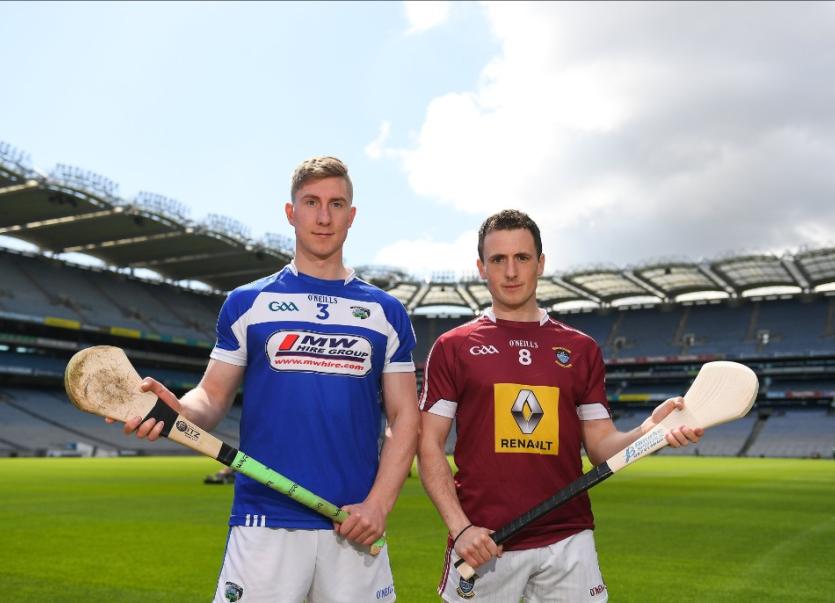 Ross King and Eoin Price ahead of the start of the Joe McDonagh Cup this weekend.

A new dawn awaits the Laois hurlers this weekend.

Having been relegated without playing a game, they must now navigate their way through six tough encounters to get to where they want to go.

That all begins against Westmeath this Saturday, ahead of a hectic schedule of five games in six weeks, with the light at the end of this championship tunnel being the chance to play in Croke Park on Leinster final day.

It is something worth aiming for, but the worry is that time spent hoping for that big day is time wasted. Laois have a very difficult sequence of games coming up, and each one provides its own unique set of challenges.

Even the run up to the competition is more complicated than in recent years. With April having been handed over to clubs, it meant that county players played an unprecedented four rounds of local league games over the last 30 days.

While it's nice for the clubs to have the players, the knock-on effect is that Eamonn Kelly doesn't see them as much, and so he and his back room team have that bit more pressure on them to get things right for the championship.

Once this competitions starts, the games will come thick and fast, with little time for problems to be rectified or injuries to heal. Laois are stepping onto a tightrope this Saturday, and it will take the efforts of everyone to keep things on an even keel.

The schedule of games has done Laois no favours either, in terms of timing or venues. Four of their five games are at 3pm on a Saturday, hardly ideal for getting a crowd out in force, and three of the five are away from home.

Those away days come against Kerry, Antrim and Meath, with the Kerry and Antrim games just six days apart. Keeping players injury free and fresh will take a big effort from the medical and coaching staff.

On the plus side, Laois look set to welcome Picky Maher back into the fold, after he recovered from his cruciate ligament injury suffered last year. Ryan Mullaney has been making great strides too and featured for Castletown during April, so Eamonn Kelly's hand has been strengthened, at last, having suffered repeated misfortune on the injury front since he stepped into the role last year.

Picky's return is a huge boost to a Laois side which leaned heavily on Ross King for scores during the league. Picky could line out anywhere from midfield forward, and he brings a big scoring threat from play, an area where Laois have often struggled.

Neil Foyle had one of his better league campaigns this year while still leaving plenty of room for improvement, and Cha Dwyer's form fluctuated wildly, often within games. To be fair, he had suffered with injury during much of the early part of this year, but Laois will need him at his best in the coming weeks, because he really is a player who can make a difference.

We will have to hope Matthew Whelan's form keeps up as well, after he shone throughout the league, but the return of Ryan Mullaney couldn't come at a better time. Laois have struggled for depth in defence, and with Cahir Healy gone for the year and Dwane Palmer opting out, it puts a lot of pressure on limited resources.

Having lead the charge from county's of this standard to break into the top tier of hurling, it would be a shame for Laois not to grasp the opportunities provided by the Joe McDonagh Cup and make the final. However, they have so much recent history with all five opponents, it makes things tough.

They head to Tralee on May 13 for yet another date with Kerry, a team we have, more or less, broken even with over the last couple of years. After that is Antrim, the third time we will play them this year. With Laois having won the previous two, an already charged game will be ramped up that bit more, so when Laois head to Cushendall on May 19, a monster of a game awaits them.

Then it's at home to Carlow before heading to Navan in the last round.

What we learned from the league is that Laois can achieve a total polarity of performances in a short space of time. After running Limerick and Galway close and then beating Antrim, Laois were awful against Offaly and worse against Dublin.

While they may not be punished as severely in the Joe McDonagh Cup for a below par display, they will still be punished. They might be able to get away with losing one game, but if they lose two then their season could well be over before the end of May.

That would be a disaster, given what's on offer for the teams who can make it to the final, so this is the time for Laois to mature and produce consistent, disciplined hurling. If things are not going their way in a game, they have to be patient, because getting frustrated leads to rash decisions, which leads to scores conceded or red cards, and we really can't afford that. Injuries are almost inevitable at this level of competition, but suspensions are entirely avoidable, so discipline is crucial.

The other challenge for Eamonn Kelly and his management team is keeping players fresh and in form. They will have to manage their playing resources as astutely as possible, trying to get the balance between winning games and not over extending the players. They'll also need subs who are in good enough form to come in and make a difference in games, so it's a major test for the Tipp man.

Laois have shown in the recent past they can beat all five teams they will meet in this competition. They can draw confidence from that, and can dream of a day out in Croke Park to keep inspiration levels up. They only get their by winning though, and that's what the next six weeks boil down to.

This is a marathon which has to be navigated at a sprinter's pace. A massive six weeks lies in store for Laois hurling.