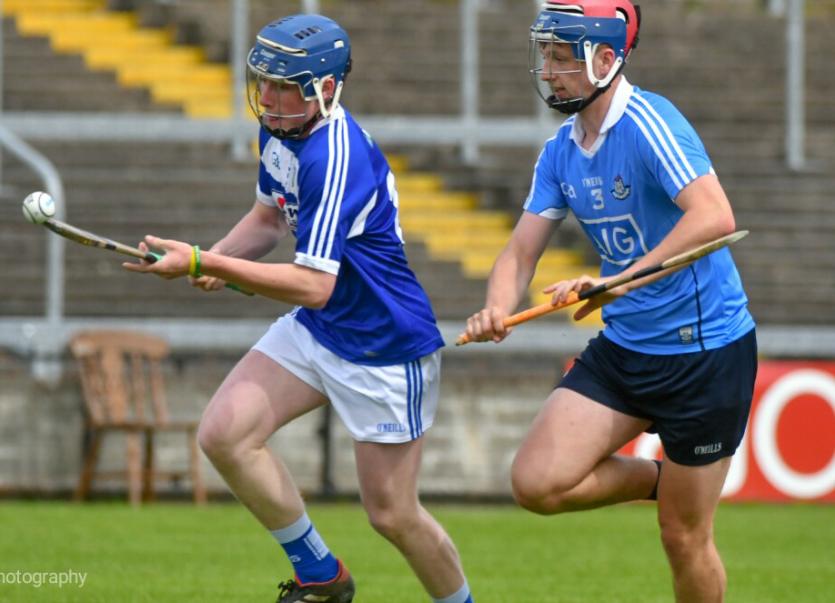 Mark Hennessy on the attack for Laois. Pic: Denis Byrne.

The Laois minor hurlers fell to a heavy defeat against Dublin in O'Moore Park on Saturday afternoon in the Leinster MHC Round 2 clash.

While Dublin thoroughly deserved the win, there were still passages of encouraging play from Laois, particularly in the first half. Unfortunately they just couldn't make that count on the scoreboard, and Dublin eased to victory in the end.

Dublin took the early initiative with a brace of frees from corner-forward Liam Dunne, with the visitors to O'Moore Park settling quickly.

Laois had the wind advantage for the first half, and it was a strong enough breeze on the day, and they finally opened their account in the sixth minute, with Adam Kirwan slotting over a free. Kirwan repeated the trick three minutes later to level the scores, and Laois were now starting to get on top.

They were working exceptionally hard right across the field, and started to open up the Dublin defence. Mark Hennessy almost had Adam Kirwan in for goal, but Jack Lambert snuffed out the danger.

Kirwan did point a free to put Laois ahead for the first time, and Cathal O'Shaughnessy then raced away from his marker and got one-on-one with Lambert, but his shot was saved. Laois had a couple of other half-chances for goal in this spell, but couldn't convert any of them, and that would prove the difference.

Dublin eventually wrestled back control of the game, with Liam Swan first drawing them elvel, and then Pearce Christie putting them in front. They added three more points to go four ahead, as another Adam Kirwan free kept Laois on their coattails.

However, the Dubs were hitting their stride now, and two more points were followed by a goal from Dara Purcell to leave Laois with a mountain to climb. Adam Kirwan added another free for the home side, but Laois still trailed 1-10 to 0-5 at half time.

Laois needed a bright start to the second half, but despite threatening to get in behind the Dubs defence on one or two occasions, the scores never followed. Dublin took the sting out of the game with a succession of frees, as Liam Dunne hit five points in a row.

Adam Kirwan eventually broke the sequence with a free for Laois, but Dublin just highlighted their own superiority after that as Dunne broke away from his marker to score a goal.

It was plain sailing all the way to the final whistle then, as Dublin wrapped up a convincing win.