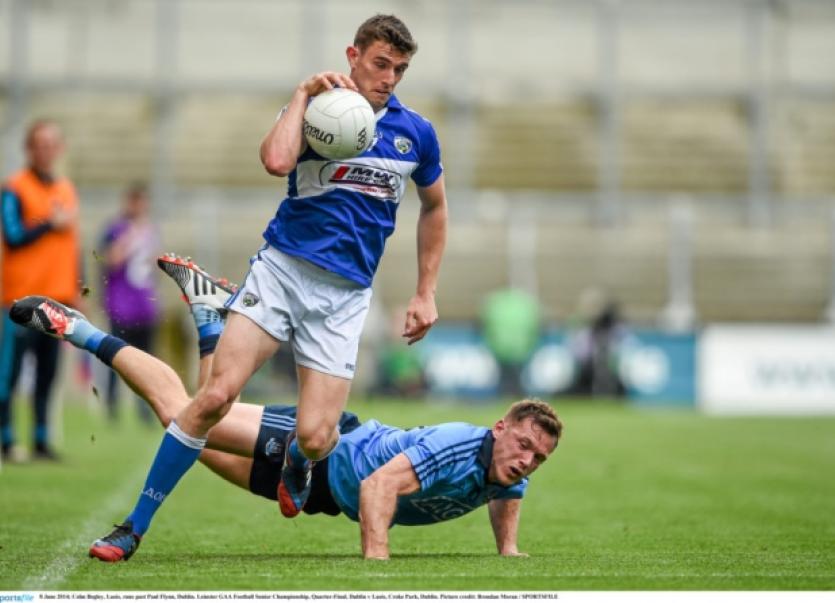 Colm Begley in action against Dublin.

By most metrics, Colm Begley has had a successful career in sport so far.

An All-Ireland medal winner at minor level, a professional in Aussie Rules, Sigerson Cups and county SFC medals with Stradbally.

Remarkably, however, it is something far more mundane which has evaded him since he returned from Australia in 2009 - he has yet to win two consecutive games in the Leinster SFC.

It's a bizarre statistic that, had you told Begley that fate would befall him as he forged a reputation as one of the most exciting young defensive prospects in the country over a decade ago, he would hardly have believed you.

And yet, he awaits that particular feather in his cap, and as he looked ahead to this weekend's clash with Westmeath, he admitted it was something he didn't like to dwell on. "I try to black that out. But isn't that a shocking statistic?

"So that shows the challenge which lies in front of us. But we have been doing well and we have been making some strides forward - moving from Division 4 to Division 3.

"What have we done yet as regards championship? Nothing. So this will be a good test to see where we are and how we are as a group. I know the players are looking forward to it."

And so they should, after a morale-boosting win over Wexford which ended with Laois supporters flooding the field at the final whistle. For a player as experienced as Begley, however, he know now not to get carried away with one result. "It did have everything and it is the cliche, but it was a game of two halves. We were caught a little bit on the hop as our intensity was a bit low in the first half.

"In fairness to Wexford, they capitalised on it. Our conversion rate was down and they transitioned the ball very quickly. Our control of the game was a bit off but we reacted at half time.

"We brought most of our game, some players individually played very well and we played well collectively. Our fitness came through in extra time too.

That reference to Laois' fitness coming through is a testament to the work put in by the panel under Robbie Cannon. Having looked off the pace last year, they blitzed Wexford when the game went to extra-time, and Begley acknowledged the work done by their new coach. "We've had a good year as regards strength and conditioning. Robbie Cannon in fairness to him has done a very good job over the last while.

"With that being said, we are very confident in the players that come in. If you have to go off, we know a lot of the lads can step in and make an impact.

"The team has been working well collectively together too. We learned a lot during the league. Kieran Lillis has done a huge amount of work, Johno too, up and down the field.

"So that makes it easier for our defenders to control the game a bit more from behind. So it is positive to see us finishing strong."

As he turns his attention to Westmeath this Saturday evening, he knows Laois are in for their toughest test of the year to date. "Westmeath are a fast, strong team that have been together for a long time. They have some high calibre star players that can win games on their own back.

"From the games we played against them in the early part of the year, they were moving well. Strong on the ball, good movement from the forwards.

"So there is a lot we need to look at and make sure we work collectively as a team or else it will be very difficult for us to play against them.

"They are experienced and have been going further in the Leinster championship in recent years. They have a lot of players who have taken ownership of themsleves in both defence and forwards.

"So if they are moving well, they can run and pass the ball."