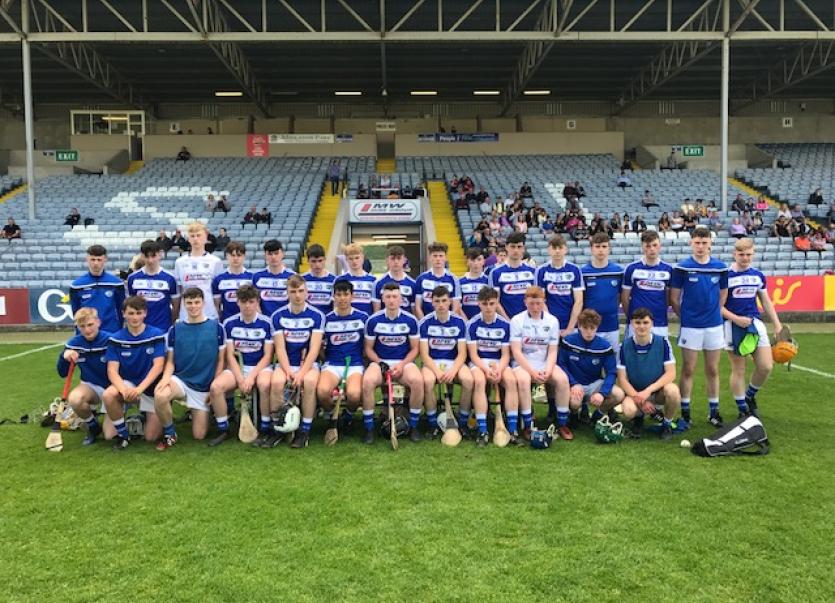 The Laois minor hurling team which took on Kilkenny.

The Laois minor hurlers turned in another competitive display with reward in O'Moore Park tonight, as they lost out to Kilkenny in Round 3 of the Leinster MHC.

The final margin of fourteen points does a disservice to Enda Lyons young side, who were just five behind with ten minutes to go. However, as Kilkenny so often do, they hit a purple patch late in the game to fill off any small hope Laois had of causing an upset.

Kilkenny were red-hot favourites for this one after big wins over Dublin and Wexford, and they made a comfortable start with points from Ciarán Brennan and Conor Kelly (free).

Laois weren't getting swamped though, and they eventually opened their account with a free from captain Conor Cosgrove. Kilkenny were quick to respond, however, and Jack Doyle whipped over their third point before Kelly landed another free.

Laois were doing their best to keep up though, and Adam Kirwan chipped in with a free to narrow the gap back down to two.

However, Kilkenny started to move through the gears after that and ran off six points in a row to move eight ahead, and Laois' hopes of a causing an upset were quickly fading away.

This team have consistently shown their fighting qualities though, and they were to the fore once again as Mark Hennessy scored two brilliant points to give his side a lift, and even though Kilkenny responded, Laois still had something to cheer as they headed to the dressing rooms 0-12 to 0-4 behind.

Laois got off to a great start in the second half, as Cathal O'Shaughnessy raced clear down the right wing, cut inside and hammered a shot to the roof of the net.

Kilkenny responded in typically ruthless fashion, hitting three points in a row to cancel out the goal, with Conor Kelly getting two of those points.

Again, however, Laois refused to roll over, and Adam Kirwan and Conor Cosgrove both pointed frees to keep them hanging on to Kilkenny's coattails.

Kilkenny had a response once more, however, and Conor Kelly and Darragh Maher added points before Lorcan Fitzpatrick produced a brilliant save to deny Kelly a goal.

His team mates made sure that save wasn't in vain by eating into the Kilkenny lead, as Conor Cosgrove (2), Adam Kirwan and Mark Hennessy all pointed to get Laois within five of the Cats.

Unfortunately for Laois, that was as good as it got, with Alan Connolly's late shot hitting the post, and Kilkenny pulled away after that. A goal from Niall Higgins was the icing on the cake for them, as they finished with a fourteen point victory.