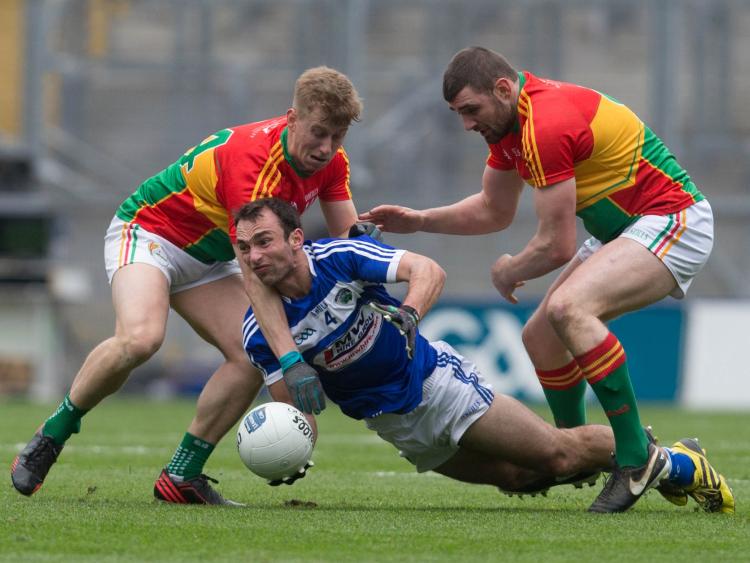 Gareth Dillon gets this pass away for Laois against Darragh O'Brien and Sean Murphy, Carlow

Laois boss John Sugrue has hailed the 'intent' of Gareth Dillon after the Portlaoise man turned in yet another impressive display against Westmeath.

Having been largely overlooked by Peter Creedon last season, Dillon has been a revelation ever since, winning the 2017 Laois SFC Player of the Year, and now starring at corner-back for the county.

The disappointment of last season appears to be spurring the Portlaoise man on, and Sugrue noted a determination about the defender ever since the team assembled late last year. "Gareth's in a good vein of form, thankfully. He's one of those guys who has come into the dressing room this year and all you see is intent out of him, every day he comes to the dressing room he's got intent to do stuff, and intent to play football hard.

"The rest of the group as well, there are fellas going very well, but the group themselves are really working hard at trying to be different and trying to be mature and to try play a good brand of football.

"I think the lads today really manfully went about their task, and it's good to see that. They played hard, they didn't bicker about things, they got up and played every ball."

Sugrue also paid tribute to debutant Finbarr Crowley, who was tasked with man-marking Ger Egan, and did a fine job in the midst of a tough championship game. "Finbarr got an unenviable job, to a great degree, but he stuck to it manfully and that's not necessarily Finbarr's strength.

"Finbarr is a great athlete, he likes roaming and likes poking holes in teams, and we felt, physically, for a young chap that he's quite well able to stay in contact with people, and we gave him the job and he stuck to it manfully, and it's a great sign for the lad himself.

"Finbarr just put his mind to it, and he stayed disciplined throughout and he's after selflessly giving himself to do a job for the team, and we've got to appreciate that, and other fellas will the do the same job, I'm sure, if they are asked."

Paul Kingston was another to catch the eye with a brilliant hat-trick, and it was his composure which please the Laois boss. "Yeah, he took his scores very well, someone pointed out to me that he got three, I didn't really know that, but lots of fellas work really hard to create those situations and Paul took up good positions, and had the composure to finish."