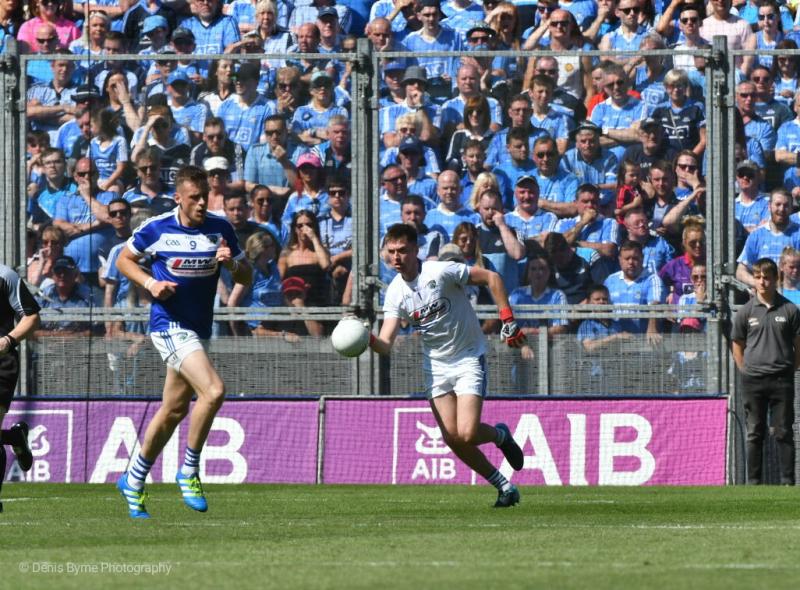 Graham Brody brings the ball out of defence for Laois. Pic: Denis Byrne.

Here is our look back at the main talking points from today's Leinster final between Laois and Dublin in Croke Park.

There were a few candidates for Laois, but Brody barely put a foot, or hand, wrong in all the time he was on the field. He assumes more responsibility than any other goalkeeper in the country, and it never seems to phase him in the slightest.

Made a brilliant save from Con O'Callaghan in the opening seconds, and follows it up with brilliant saves from O'Callaghan again in the sixth minute, and Jack McCaffrey early in the second half. Dublin caused him problems on the Laois kickout, but he got better as the game went on. Dublin won three of the first four Laois kickouts, but Laois won nine of the next ten, thanks to Brody's improved kicking.

As ever, he got out from between the posts and helped to get a number of Laois attacks up and running, notably the one which led to the Donie Kingston point which levelled the game in the 17th minute.

Kudos too, to Evan O'Carroll for a fine display in the full-forward line, where he won the bulk of possession kicked his way. Donie Kingston, Niall Donoher, Alan Farrell and Gareth Dillon also played well on a difficult afternoon.

It was mentioned frequently enough before the game, but the strength in depth of this Dublin side is incredible. They introduced Jack McCaffrey at half time, Paul Flynn in the second half, and Cian O'Sullivan and Kevin McManamon weren't even required.

Against that backdrop, you get a clear view of what Laois were up against here. That they could put it up Dublin so well for the first half with less than a year of work under John Sugrue is a testament to them. If this group can stay together, and Sugrue can continue to work with them, then further development is inevitable.

However, patience is key here too. It could take a year or two before they can sustain a display like they did for the opening 35 minutes for a full game. Dublin have years of conditioning and coaching under the same management team to call on. Laois don't have that yet, but they do have a management team the players clearly believe in, so that can only be a stepping stone to something greater.

In the 26th minute, Laois cut the Dublin defence open for the first, and probably only time, in the game. Alan Farrell was sent haring through on goal, with Donie Kingston peeling off Philly McMahon to his right.

It wasn't an easy scenario to work a goal from, but it was the best one Laois had up that point, and Farrell opted to take his point. It was the sensible play and there was no guarantee a one-two with Kingston would have borne fruit. On the flip side, Laois were never going to be in a position to turn chances like that down, and they needed to try get a goal from there.

Dublin seemed to sense the danger posed by Laois at that stage, and they tightened things up at the back a lot more. Laois would not score again in the first half, while Dublin went on a run of five unanswered points before the break.

It was by no means the losing of the game for Laois, but that appeared to be the moment Dublin were jolted into upping their performance levels, and they duly responded.

Games like this are hard enough for a team like Laois, but a few of the calls certainly didn't go Laois' favour. Donie Kingston seemed to be fair game for some particularly heavy challenges from the Dublin rearguard. If the same challenges were made on someone smaller it would have been a free, but Kingston's size seemed to offer those marking him a greater license to push the boundaries of what was acceptable.

Maybe we'll be accused of sour grapes on that score, but so be it. Barry Cassidy didn't affect the outcome of today's game, but it wasn't the greatest referee's performance Croker has seen either.

We sincerely hope the talk in the pubs of Laois tonight isn't negative. Laois were soundly beaten on Sunday, but for a team that has suffered years of mismanagement and gotten itself stuck in a downward spiral, to bounce back as they have done this year is a testament to John Sugrue and everyone else involved.

This Dublin side are the best that has ever played the game. If you were told last year as you filed out of O'Moore Park following a hammering at the hands of Clare that the Laois senior footballers would win ten games in a row and contest a Leinster final in less than 12 months time, you'd have been dismissed as a madman.

There is still so much to play for this season as well. We may have lost to Dublin but there is a huge prize on offer if they can win their next game, that being a place in the Super 8's. We're down right now, but we're definitely not out.

That Laois run in the first half when they rattled off four points in a row was superb. The crowd were on their feet, the defence was stifling Dublin, forcing them to take shots they didn't want to and the Dubs looked genuinely perplexed by the way things were going.

At the other end, Donie Kingston was causing Philly McMahon plenty of problems, and Laois were using the ball cleverly and showing patience to pick off their scores as they needed them. It was a fleeting period of the game, but it was still a wonderful feeling to be watching a Laois team play so well in a Leinster final.

We'll just have to take those positives and accentuate them for whoever the draw pairs us against in the next round.

Most of the second half was tough viewing unfortunately. Laois worked so hard in the first half that it was always going to take its toll, and Dublin's superior fitness and conditioning hit home hard after the restart.

They just kept coming in waves and it was tough to see the Laois team have to watch the ball sail between the posts with such regularity. No doubt it was frustrating for them, but they'll just have to bottle that frustration and channel it into their preparations for the next game.