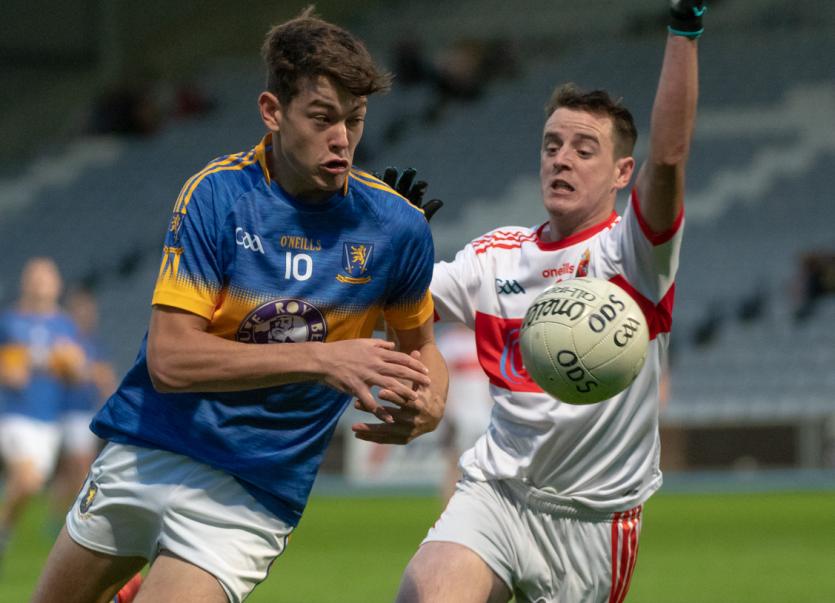 The game that most people expected to be the most exciting game of the weekend didn’t live up to its billing, but O’Dempsey’s won’t mind, as they booked their place in the senior semi-finals for the first time in four years.

With two ACFL Division 1 titles to their name in the last two years, it was about time O'Dempsey's made a meaningful impact on the championship.

After losing to Graiguecullen in the opening round, they have steeled themselves well to plot a route to the last four. Matthew Finlay is probably the most in-form forward in the championship, and all other aspects of their game are functioning well as they bid to qualify for a first county final since 1983.

Emo started on the front foot, as they showed no sign of rustiness from not playing a competitive game in five weeks, and raced into a 0-4 to 0-1 lead.

Evan Costello and Matthew Finlay swapped points from placed balls, before Paul Lawlor fisted over when perhaps a goal was on the cards. Evan Costello placed over the other two points, with one coming from play, and the other a free.

O’Dempsey’s were much the better side for the remainder of the half though, as they outscored their neighbours 0-7 to 0-1 to take back the advantage here. The red hot Matthew Finlay was at the heart of O’Dempsey’s scoring, with six of his sides eight points coming from his feet.

He put over a free first, before Michael Finlay grabbed another after a well-worked kick-out from O’Dempsey’s. They then had a sniff at goal, as Conor Meredith sent a long free into big full forward Daniel McCormack, who turned his man, but was denied by Emo shot stopper Niall Gorman.

Matthew Finlay kicked the resulting ’45, but three minutes later, Emo almost had a goal of their own. A sloppy Tom Kelly sideline ball gave possession back to Emo, and Evan Costello nearly fed Jack Owens, who would’ve had a tap in, but Padraig Bannon expertly read the pass and cleared the danger.

Matthew Finlay kicked three more points, before Darren Strong finally got Emo back on the board. Barry Kelly scored the last point of the half, and they went in three points to the good.

Matthew Finlay accurately placed over his fifth free of the evening on the resumption, but Emo came roaring back, with three points without reply leaving just the difference at the minimum.

They were all frees, as Costello converted the first, with Paul Lawlor, who had been pushed back into full forward for the second half, kicking the other two.

Michael Finlay and Evan Costello exchanged nice points, but then the key moment in the game unfolded. Conor Meredith, Barry Kelly, Daniel McCormack and Matthew Finlay were all involved in the build-up, as Michael Finlay was the one to palm home one of the best team goals you’ll ever see.

Mark Barry then sold a nice dummy before firing between the sticks to put O’Dempsey’s five in front.

Emo were struggling to break down a tight O’Dempsey’s defence, but Darren Strong did kick a ’45 to leave the gap at four.

Conor Meredith was then awarded the opportunity to put the game to bed, as Barry Kelly was tripped in the square. Up stepped Meredith, but he saw his shot deflect off the post and out to safety. Emo were still hanging on, and they had goal chances themselves near the end.

Padraig Bannon stood firm in goals though, as Michael and Matthew Finlay made sure of the win for O’Dempsey’s. Although they’ll need to improve if they want to challenge, they will have a semi-final to look forward to.