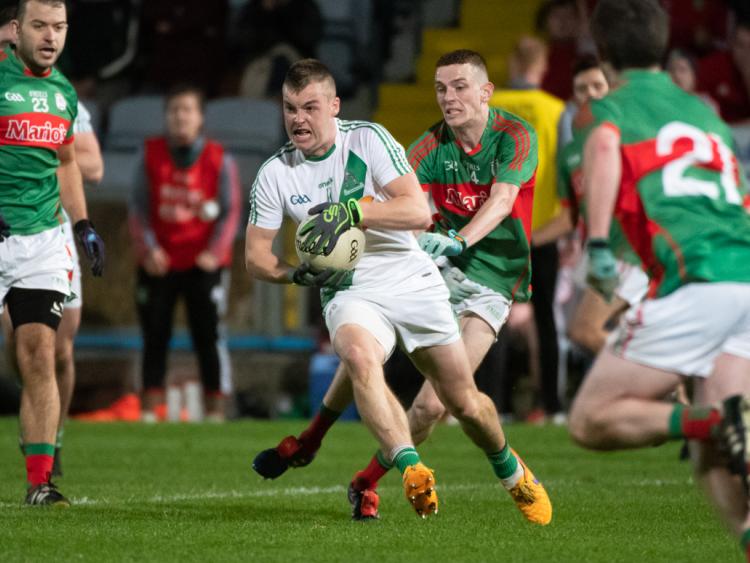 Eoin Lowry on the attack for Killeshin. Pic: Denis Byrne.

Neighbours and local rivals Graiguecullen and Killeshin met in the first of the Laois SFC Quarter finals on Friday evening in O’Moore, where a brilliant comeback from Graiguecullen earned them a replay this Wednesday night.

The game was played at a frantic pace that left a big crowd in O’Moore Park on the edge of their seats. A late goal from James Doogue and two unbelievable points from centre forward Jamie Parr was the turning point of the game.

The teams will now meet again this Wednesday night in O'Moore Park, with the rest of the teams left in the SFC on tenterhooks as the draws for the semi-finals cannot be made until the winner of this game is known.

It is sure to be another cracking encounter, with the momentum appearing to be with Graiguecullen after they ralled in the closing stages to save their season.

Killeshin were the more dominant side in the first half and David Aston got the games first score from a free. Killeshin were well on top in the opening quarter and had two goal chances which they couldn’t finish.

Killeshin were awarded a penalty after just three minutes of play when Cathal Brennan was taken down in the square. Eoin Lowry stepped up to take it but the shot was saved by Danny Bolger, along with the rebound, and Aston slotted over the resulting ’45.

Graiguecullen finally got on an attack at the other end and got their first score after five minutes of play which came from the boot of Brian Byrne.

Graiguecullen got two important scores before the break however, as Danny Bolger pointed a free and Jamie Parr followed with another. The half time score saw Killeshin lead 0-6 to 0-5.

Killeshin continued their impressive form in the opening ten minutes of the second half as some great link up play resulted in a nice point from Evan Lowry.

After 32 minutes of play the Killeshin men pushed further out in front as Kevin Ryan hand passed the ball across the square to find Evan Lowry free to slap the ball into the goal.

Aston added another free before Jamie Sheehan got Graiguecullen off the mark and after a frantic five minutes it was Killeshin ahead 1-8 to 0-6.

Brian Byrne and Jamie Parr then pointed to reduce the margin but Killeshin took their scoring chances at the other end as David Aston pointed from play. Adam Deering followed with another and again it was five points separating the sides after 54 minutes as Killeshin lead 1-12 to 0-10.

The turning point of the game then came when a ball across the square form Aaron Forbes was kicked into the back of the net by James Doogue. Jamie Parr then followed up with a excellent long range point as GraigUecullen pressed forward.

Some incredible defending from Mark Timmons and Trevor Collins meant they had one last attack. This resulted in a ’45 being rewarded and Danny Bolger stepped up to slot it over meaning the sides must do it all again after a frantic game of football.

Read also: O'Dempsey's get the better of Emo in Laois SFC