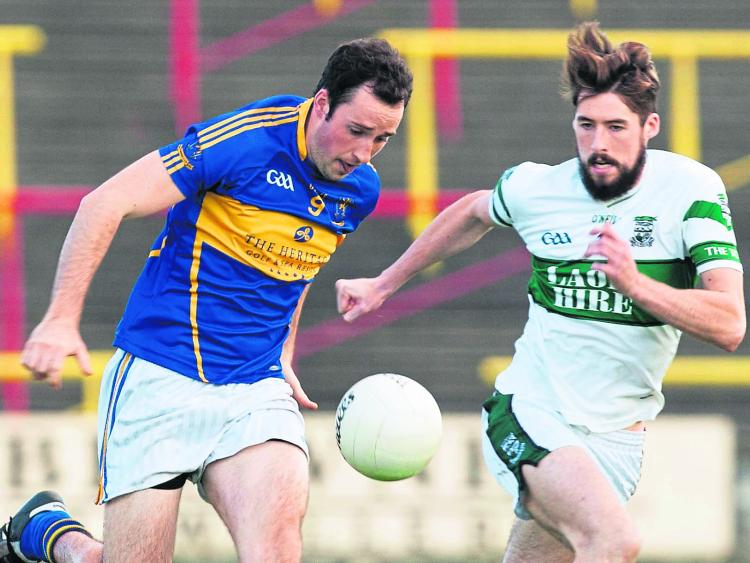 Conor Meredith and Conor Boyle will be central figures this weekend.

Another year, another final, another Portlaoise appearance.

This makes it twelve in a row for those of you who are counting, as their dominance of the Laois SFC landscape remains intact.

O'Dempsey's will be the eighth different team they have faced on that run. If this were a game of musical chairs, then Portlaoise are just refusing to get up, while the rest of the teams float around and occasionaly take a seat beside them, if they can time things just right.

For the Killenard me, this was the year for them to make a final, if it was ever going to happen for this group. A second ACFL Division 1 title in succession was good preparation for the championship, and even though they lost their opening game, they have bounced back really well.

They are playing some lovely football, have pretty much every player on the team in form, and come into the game as the heaviest of underdogs, meaning there is little to no pressure on them.

All those things are the positives, but they have a huge task on their hands to plot a course past the most dominant side that Laois club football has seen.

Portlaoise have been cruising through the Laois SFC so far, with all four of their games beyond doubt by half time. They blitz you early and have, for the most part, eschewed the old maxim of 'take your points and the goals will come.'

If there's even a hint of a goal, Portlaoise will go after it, because they know it's worth more than the three points they get for it. There is a psychological element to it as well, because Portlaoise know that when they score goals, the other team gets disheartened that bit quicker.

They have scored ten goals in just four games, and should have had at least double that amount. The closest they have come to losing a game was when Graiguecullen got within ten points of them, 1-16 to 0-9, in Round 2.

Their movement up font allows for goal chances to be created, as they rarely leave anyone sitting in the full-forward position, instead clearing it out and leaving space for a well-time run to open up a chance for goal.

The occupant of that full-forward position up to now has been Brian 'Bruno' McCormack, who looks set to miss the final after being shown a straight red-card in the semi-final win over St Joseph's. He has comfortably been their top scorer this year, but his loss will be felt beyond his scoring prowess.

He is a conductor without a baton, as he is in constant contact with the players around him, moving the various Portlaoise pieces around the chessboard to lead his team to victory. Their last loss in this competition, the 2016 final, came after he was forced off injured in the first half. He is a hugely important member of this team, but the system they play should still thrive independent of his absence.

Anyway, just as he made way against St Joseph's, Paul Cahillane made his return from injury, so if he is fit to start the final, it will offset the loss quite significantly for the champions.

Portlaoise have too much all-around quality to be thrown by the absence of one player, and their strength in depth will be a big factor O'Dempsey's have to deal with in the final.

One of the most noticeable things Malachy McNulty has achieved in his tenure is the development of younger players. David Holland, Chris Finn, Gary Saunders, Frank Flanagan and Benny Carroll have all developed into fine footballers under his tutelage, strengthening both the starting team and the depth of their panel.

It all looks very daunting for O'Dempsey's, and in truth it is, but they have to look for weaknesses in the Portlaoise armoury.

To begin with, while the six Portlaoise defenders are all superb footballers, they are all relatively small, unless Frank Flanagan is drafted back into the starting team. O'Dempsey's full-forward Dan McCormack will tower over any of them, and he offers one option for them in attack.

Kicking a high ball into him is maybe a bit agricultural, but if gets them close to goal and McCormack can bring his team mates into the fray from there, then it's something they'll have to consider.

O'Dempsey's haven't set themselves up as a long-ball team though, so it would be a departure for them to do this. They have had a lot of success already this year running the ball and having support for the man in possession. They will just have to be very clear on their movements going forward, because any hesitation or turnovers will be punished.

The other bonus for O'Dempsey's has been their attack, and their forward line is really playing well. They have been scoring heavily from play also, something teams routinely struggle to do against Portlaoise, and they will have to keep that up. Matthew Finlay, Míchael Finlay and Mark Barry have scored 4-40 from play between them in six games.

Matthew Finlay is the top scorer in the competition by some distance, and one of his key weapons is his ability to shoot accurately from distance, and that is something which could stretch the Portlaoise defence a little.

The Portlaoise defenders are all good man-markers too though, so just winning your individual battle is a big enough task for anyone playing them.

The other thing Portlaoise defenders love to do is attack. They will bomb forward with glee if the opportunity arises, which forces opposition forwards to follow them as they try to track back. That in turn leads to their opponents losing their shape, so again, it is something O'Dempsey's have to be mindful of.

At midfield, both teams look quite well-matched. Rory Bracken has been playing well since shaking off a shoulder injury, while Barry Kelly is probably having his best ever season for the club. Likewise for Portlaoise, Kieran Lillis and Ciaran McEvoy are both playing well, chipping in with scores and winning plenty of possession.

The first job O'Dempsey's have on their hands is to get through the opening quarter without conceding a goal. Portlaoise will look to grab one early, and O'Dempsey's will need to keep themselves in the game for as long as they can.

When the teams met in the 2014 semi-final, the Killenard men probably should have won. Míchael Finlay's goal just before half time put them 1-4 to 0-4 up at the break, but they retreated into themselves in the second half, eventually losing by six.

Most of this team were playing that day, so they will have to have learned from that experience. If you want to beat Portlaoise, you have to play to your best for the full sixty minutes. The flip side of that is that Portlaoise could do enough in ten minutes to, more or less, win themselves the game, so there is no doubting how difficult it is to get the better of them.

Portlaoise will enter this game as favourites, deservedly so, and it is up to O'Dempsey's to show they are capable of winning. We know Portlaoise can, but with four relatively comfortable victories under their belts to date, they may be a little undercooked if this goes to the wire.

Whether it gets that far, however, remains to be seen.