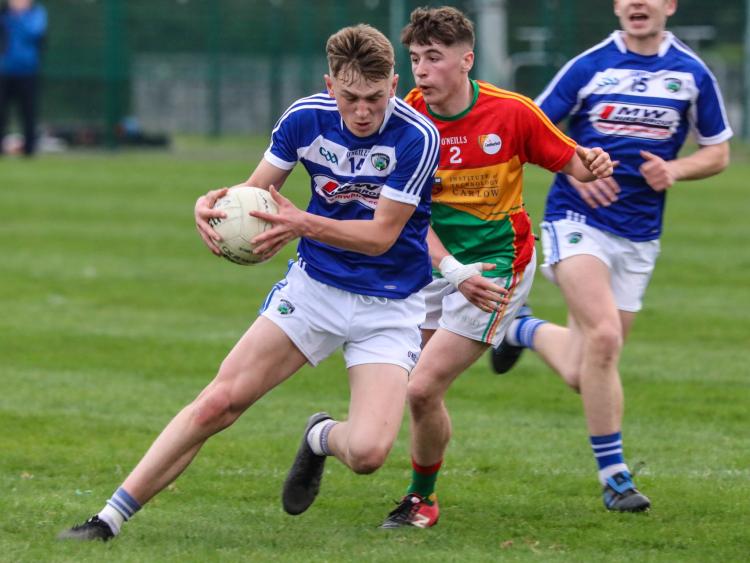 A last gasp free from Ballyroan Abbey's Brian Whelan in the sixth minute of injury-time rescued a draw for the Laois Minors against Carlow in a bitterly close encounter in IT Carlow tonight.

Laois trailed deep into injury-time but battled right through until the final whistle with a late, late free from Ballyroan Abbey's Brian Whelan salvaging a point for Donncha Phelan's men against Carlow tonight.

The sides went in level at five points apiece after the opening half, and Carlow will feel like they should have gone in with a sizeable advantage having enjoyed ample possession and generally dictated the pace in the first thirty minutes.

Carlow's Dylan Doyle opened the scoring in the first minute to set us underway. Laois followed suit a minute later when full-forward Ciaran Burke got a fist to the long ball in.

Full-forward Darragh Nolan edged Carlow into the lead shortly after, but a booming point from Colin Dunne had Laois level almost instantly in a busy opening five minutes to the game.

Carlow re-took the lead when Patrick McDonnell and Dylan Doyle combined to see the latter split the posts as they went 0-3 to 0-2 in front.

Ten minutes passed before another score arrived, in that period though Carlow would have two goal chances go amiss as Donncha Phelan's men breathed a sigh of relief.

Laois got back on level terms with sixteen minutes played, Portarlington's Rioghan Murphy lifting a white flag from straight in front of the posts.

Laois took the lead for the first time just after the twenty minute mark thanks to Colin Dunne's second of the evening, this time from a free just inside the forty-five metre line.

Carlow hit-back with two points in as many minutes through Anthony Keating and a pointed '45 from Darragh Nolan to see them go one-point ahead.

Laois midfielder Conor Goode levelled the sides at five points apiece with a fine composed point, and that is how it would stay as sides entered the dressing rooms for half-time.

Carlow restarted the game well to claim the first two points of the half through Darragh Nolan and Dylan Doyle, but half-time substitute Ciaran O'Neill made an instant impact from the bench to reduce the margin to a point in the early minutes of the half.

Carlow increased their lead to three through Doyle and Nolan again, but Laois battled back with Mark Kehoe and Brian Whelan closing the gap to a point with seven minutes to go.

Carlow restored their two point cushion through another Doyle free, but Laois set about dismantling the Carlow lead and got back on level terms with points from Whelan and Rioghan Murphy with a minute left to play.

Carlow looked to have stole the result with Doyle adding their eleventh point on the stroke of sixty minutes, but there was to be late drama as Brian Whelan nailed a free in the sixth minute of injury-time to salvage a draw with virtually the last kick of the game.

Laois will now meet Westmeath in their next game.