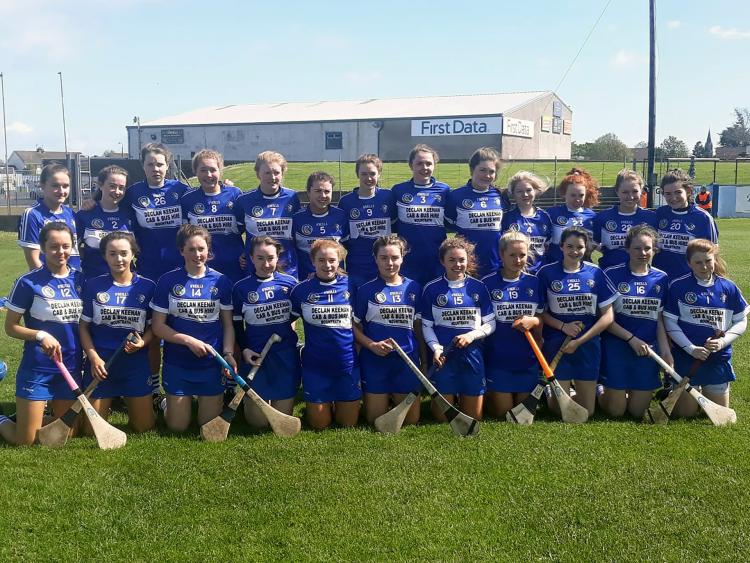 The Laois Minor Camogie team have been crowned All-Ireland champions in MacDonagh Park in Nenagh following a seven point victory over Limerick in the replay this afternoon.

Laois had to settle for a draw last weekend in the same venue, but made no mistake the second time of asking.

Limerick were first out of the blocks with Sinead McEligott raising the first flag of the day with less than a minute on the clock having caught the ball in, turned and fired over the crossbar. Laois had a chance of their shortly after when full-forward Kirsten Keenan pulled the ball from a rut but saw her shot go just wide of the right-hand post.

Laois opened their account just before the ten minute mark when Alice Walsh fed the ball to Keenan, and the Camross poacher rattled the Limerick net with a blistering strike into the top corner to send Laois into a two-point lead.

Limerick replied with two points in as many minutes from Iris Kenneally and Sinead McEligott to bring them back level - McEligott's a super score from range to level the proceedings.

Walsh provided the assist to Keenan's goal, and Keenan returned the favour soon after as she recycled the ball out from the corner to Walsh who duly split the posts to push Laois back into the lead. Walsh grabbed her second on the quarter of an hour mark as Laois went two points clear.

A seven minute break until the next score, but again it went in Laois' favour as Keenan converted a free after Eireann Cole was fouled. This one raised a bit of controversy as the umpires and referee deliberated before eventually raising the white flag.

Limerick claimed the final score of the half with twenty-seven minutes on the clock when Sinead McEligott was fouled by Laois goalkeeper Aedin Lowry and the referee signalled a penalty. Enya Harrington stepped up to expertly dispatch the dead ball into the top left corner of the net.

Keenan had a goal chance for Laois right before the break, but the Limerick keeper was equal to it and the sides went in level at 1-3 apiece in a bitterly close opening half.

Luck was on Laois' side in the closing half as two fortunate goals fell their way following two mistakes from Sarah Gillane in the Limerick goals.

Limerick reopened the half with a goal just two minutes after the restart, Ailbhe Larkin fed the ball to Orlaith Kellegher who rattled the Laois net with a great finish to send them ahead.

Clodagh Tynan landed a long range free for Laois to ease them back into half. Laois' two fortunate goals arrived soon after when Alice Walsh's long ball in was miss-controlled by the goalkeeper and Eireann Cole batted to the net. A minute later, Clodagh Tynan launched a ball into the square from sixty-five metres out and that too found its way into the back of the net.

Keenan landed a free for Laois just after the quarter of an hour mark, and their fourth goal arrived four minutes later when Shona Jones capitalised on a mistake by the Limerick defence as Laois pulled clear.

Laois goalkeeper Aedin Lowry received her marching orders with ten minutes to go for a second yellow card offence. Iris Kenneally and Jessie Quinlan added late points for Limerick, as did Alannah Tynan for Laois, as Laois held on for a memorable victory.