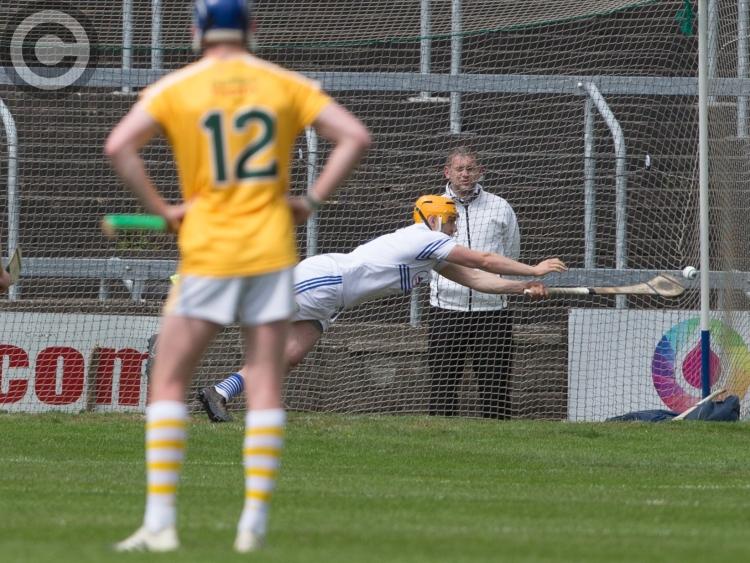 Laois goalkeeper Enda Rowland pulls off a brilliant save to deny Neil McManus from the penalty spot. Photo: Alf Harvey

Buff Egan was in O'Moore Park on Saturday afternoon for the clash of Laois and Antrim in the second round of the Joe McDonagh Cup where Eddie Brennan's side ran-out eight-point victors in a dominating display to notch their second win of the competition.

Buff was on hand in Portlaoise to provide updates to his thousands of followers from the Joe McDonagh Cup clash between Laois and Antrim, a game that was not televised nor is likely to get much, if any, airtime on The Sunday Game tomorrow night. If you're not familiar with the man, make an effort to take a look and you won't be disappointed.

Having watched Laois run out comfortably against Antrim, we brought you our video of when Buff spoke to the Leinster Express in the O'Moore Park Press Box and he gave his reaction to Laois' win,  naming one particular Laois player a 'stallion of a man'.

The man he was talking about was of course Laois' man-of-the-match, Enda Rowland. And we're inclined to agree with Buff on this one as the Abbeyleix goalkeeper was superb for Laois today, denying a Neil McManus penalty, scoring three points from frees himself as well as a pulling off a host of saves and interceptions.

Podge Delaney was deemed to have fouled McManus in the square twenty-three minutes in and when the Saffron legend stepped up to take the resulting penalty, Enda Rowland produced an incredible save to deny Antrim.

Watch Rowland's brilliant diving save to deny McManus via Egan's Snapchat Story below: