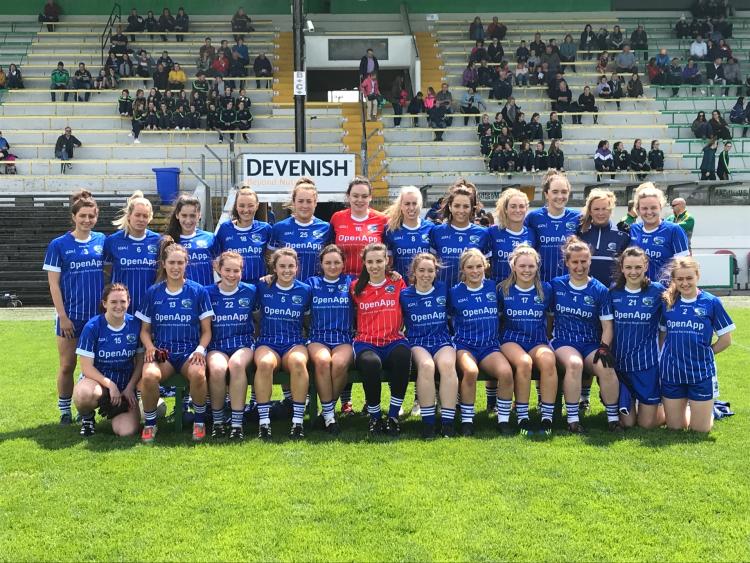 The Laois Ladies Intermediate football team that lost to Meath in Pairc Tailteaan, Navan this afternoon

The Laois Ladies Intermediate footballers fell to a stronger Meath team in the Leinster quarter-final today in Pairc Tailteann, Navan.

Backed by a strong wind in the opening half Meath went two points ahead in the opening two minutes through Vikki Wall and Stacey Grimes. Laois replied with a point from Emma Lawlor after a good run from Sinead Cullen.

Grimes sent over a close range free after Kelsey Nesbitt was fouled on route to goal, and then Laois had a chance at goal only to see Monica McGuirk brillianty deny Cullen's effort with five minutes played.

Mo Nerney registered her first of the day from a free shortly after and then Laois lifted the first green flag of the day when Nerney and Erone Fitzpatrick combined to send Laura Nerney through for a clinical goal after ten minutes.

Meath hit two in a row through Emma Duggan and Grimes before Laois' midfield duo Laura Nerney and Jane Moore played a quick one-two to see the latter split the posts. Meath netted what was to be their first of three goals in the opening half a minute later when Nesbitt played in Grimes to round the Laois goalkeeper Fiona Kelly and walk the ball to the net.

The swirling wind was proving a major obstacle for Laois as they struggled to retain their own kick-outs as Meath capitalised with a further two points through Nesbitt and Grimes.

Laois almost had their second goal of the day when Fitzpatrick played Aisling Kehoe through one-on-one, but McGuirk pulled off another great save to deny the full-forward, and then at the other end Grimes saw her effort come back off the crossbar before Megan Thynne split the uprights.

Laois had a goal disallowed two minutes later after Mo Nerney hit the net, but Fitzpatrick added a point to narrow the home side's lead. Meath hit two goals in quick succession through Emma Duggan and Grimes, and then Portlaoise's Ellen Healy denied a fourth with a superb block.

Mo Nerney and Nesbitt traded points in right before the break as Meath went in with a commanding eleven point lead on a scoreline of 3-10 to 1-5.

Laois reopened the scoring after the restart through Erone Fitzpatrick, but Fiona Kelly was called into action to deny Vikki Wall. Points followed for the home side through Grimes and Maire O'Shaughnessy. Laois got back on track with a Mo Nerney free from range and a super goal from Emma Lawlor through the keeper's legs.

Meath netted their fourth goal through substitute Bridgetta Lunch mid-way through the half, followed by a point from Emma Duggan. Laois added points through Lalwor and Mo Nerney, and substitute Emily McWey had a late shot on goal saved as Meath finished strong with a brace of frees from Grimes to progress to the semi-finals.