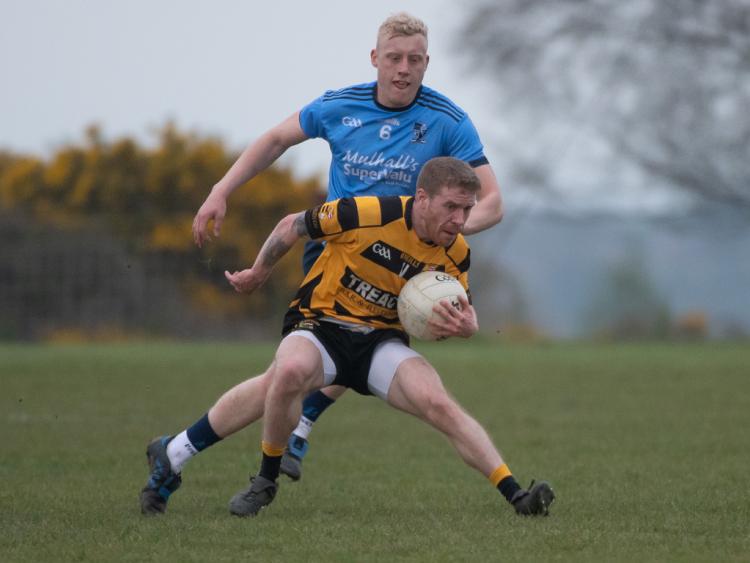 Ballyroan Abbey edged themselves closer to ACFL Division 1A safety with a three-point win over The Heath last Thursday night.

The Heath remain rooted to the bottom of the table, this their eighth loss in a row. A poor first half performance was to prove their undoing on this occasion, as they were seven points down after 19 minutes.

Ballyroan Abbey found themselves under the cosh in the second half, but they handled it well, denying The Heath any clear goal-scoring opportunities and were good value for the win on the night.

The home side had started brightly, with wing-back Jamie Whelan getting up to kick the opening score of the game with a little over a minute played. The Heath reacted well to the early setback, with Chris Bergin slotting over a free after Evin Keane was fouled off-the-ball.

They then went ahead for the first time in the game a minute later, when Keane turned finisher by making room 35 yards and expertly landing the ball between the posts. The early stages were entertaining fare, and Ballyroan Abbey were quick to restore parity when corner-back Aaron Carroll launched over a superb long-range score.

From that point on, Ballyroan Abbey moved up a gear and The Heath struggled to keep with them. Enda McWey curled over a free to restore their lead, before well-worked team move ended with a goal. Padraig McMahon’s pass from the left wing found Ciaran Carroll on the right side of the penalty area, and he fed Shaun Murphy, who whistled a low shot to the bottom right corner of the net.

Enda McWey followed that up with another free before Aaron Carroll got his second point of the game from corner-back. McWey registered his third point of the game after that, his first from play, and the sky blues were now seven ahead.

The Heath needed to claw back some ground before half-time, and they duly did thanks to points from Daithi Carroll and Evin Keane. However, a Padraig McMahon point from a tight angle left Ballyroan Abbey six clear at the break, 1-7 to 0-4.

The Heath really needed a result from this game, and they were much improved on the restart. Chris Bergin landed an early free, only to see it cancelled out by the impressive McWey at the other end.

Bergin repeated the trick for The Heath with his third free of the game, and then a wonderful sweeping team move brought them from one end of the field to other, ending with a point from Evin Keane.

The gap was down to four now as The Heath looked to build momentum, but McWey came up with another timely score, from a free.

The Heath kept plugging away, and Chris Bergin and James Phelan added two more points in the closing minutes of normal time, to leave just a goal between the teams. Ballyroan Abbey defended stoutly in the closing stages, keeping The Heath at arm’s length and going on to record a well-deserved, and crucial, win.