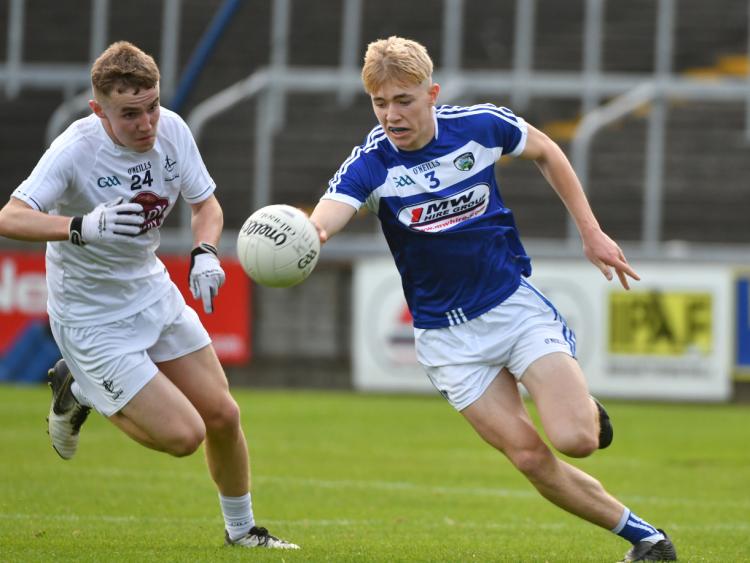 The Laois minor footballers bowed out of the Leinster Championship at the semi-final stage following tonight's three-point loss to Kildare at O'Moore Park.

Kildare started the better of the two sides, breaking the deadlock nine minutes in when Aaron Browne fired over to them away. Three frees followed for the Lilies through Eoin Bagnall, his third from forty-five metres out to push Kildare four points clear with fifteen minutes played.

Having failed to score in the opening quarter, Laois emphatically got on the scoresheet sixteen minutes in when Eddie Critchley picked out Oisin Hooney who blasted his shot past Kildare goalkeeper Cian Burke to bring Laois back into the reckoning. Bagnall replied with his fourth of the game, this time from play, to increase the Kildare lead to two points.

Laois chipped away at the visitors lead with Rioghan Murphy and Conor Goode combining to see the Stradbally midfielder send over his first of the day, reducing the Laois arrears to the minimum.

Laois had a goal chance straight after, Hooney's pop-pass over the top finding Brian Whelan to send him through one-on-one but Burke refused to be beaten a second time and excellently denied teh Ballyroan Abbey man's shot with twenty minutes on the clock.

That's how it remained as the sides went in at the interval, Laois narrowly leading by a point - 1-3 to 0-5. However, Kildare will be dissappointed with their composure in front of the posts as they kicked eight first-half wides.

Kildare re-opened the scoring a minute after the restart with Bagnall pointing a free to level the sides. Laois hit back with a free of their own from Brian Whelan but Oisin Milmoe replied instantly to keep the sides level.

Eoin Bagnall followed with his sixth and seventh points of the day as Kildare went two clear before Whelan converted a free for Donncha Phelan's men.

Kildare closed out the game with Aaron Browne and Shane Flynn adding points as the Lilies finished with three points to spare as they now progress to the Leinster final.