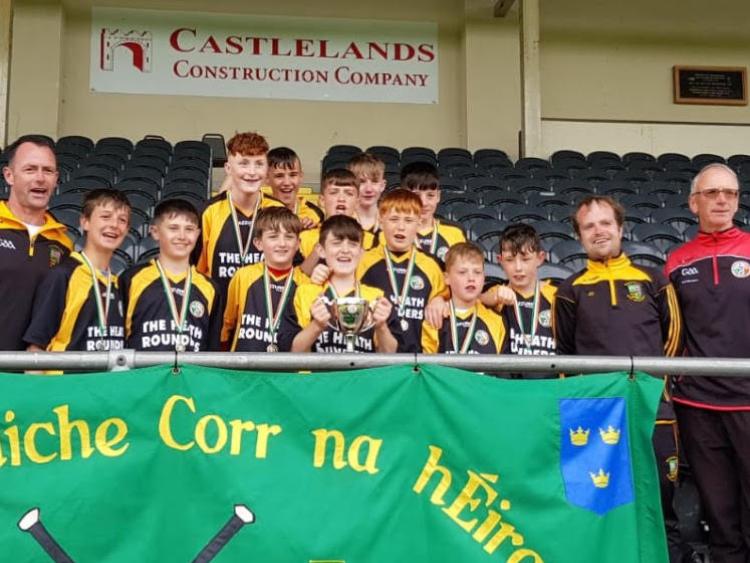 The Heath U-14 rounders boys team travelled to Mallow, Co. Cork on Saturday morning in a bid for All-Ireland glory, which they did in emphatic fashion.

The Heath boys put in a faultless display all day by winning all of their matches and became Feile Na nGael champions for the second time in its three year history.

The Heath started their day by playing Na Fianna from Dublin. The Heath couldn’t have gotten off to a better start, running in 3 homeruns to leave a young Na Fianna team too much to do. The Heath closed out the game and got their first win of the day with a 17-0 victory.

Up next was a tricky assignment against Breaffy of Mayo. Breaffy looked like they were going to topple The Heath going into a 10-0 lead, but The Heath weren’t fazed by this. More homeruns from Aaron Keane and Patrick O’Callaghan inspired the fightback and they went into a 26-10 lead.

Great fielding from captain PJ Larkin combined with Kurt Kavanagh on first base to get Breaffy out and booked their place in the quarter-final.

The Heath went on to face Breachmhaigh of Mayo. This was a tight a fair from the start. Once again The Heath looked in trouble, needing three to win with having one person out. Tony Walsh hit the winning runs to set up a semi-final clash which was a repeat of last year’s final where The Heath met old foes Emo.

Aaron Keane and PJ Larkin once again led the way for The Heath with inspirational performances helping The Heath to knock out the defending champions and progress to the All-Ireland final where they played Ioma of Laois.

The final produced great rounders from both teams. Ioma went into the lead 3-2 and were looking good. The Heath then found another gear and produced a championship winning performance. The Heath went into a 7-3 lead coming into the last innings.

Aiden Grace of The Heath sealed the win with a magnificent catch outfield which sparked jubilant celebrations from players, coaches and spectators.