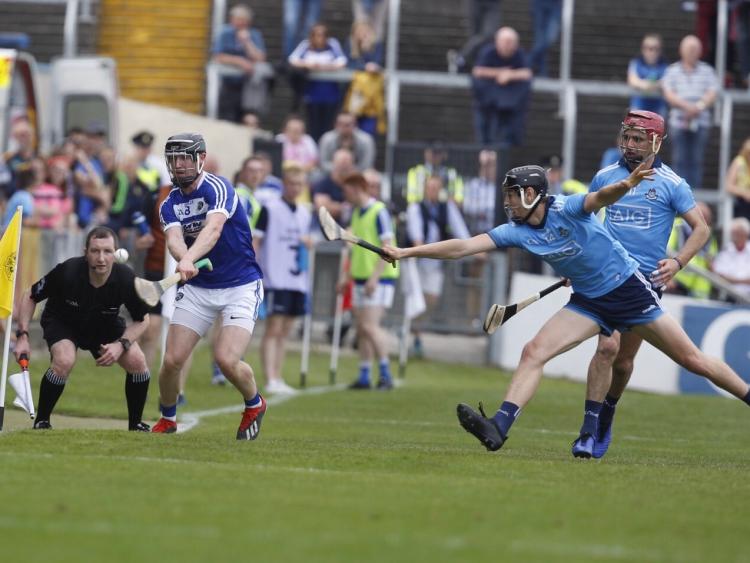 Eddie Brennan's Laois hurlers, the Joe McDonagh Cup champions, have defeated Dublin in the All-Ireland preliminary quarter-final in front of a packed house in O'Moore Park this evening.

Laois led by five points at the interval after a first-half goal from Aaron Dunphy, and pushed on in the second half to emerge two point victors in a dramatic finish.

Laois got off to a flying start in O'Moore Park, a stirring point from Cha Dwyer a minute and a half in set the tone for the game to come. Mark Kavanagh converted a 65 shortly after to send Laois two points clear.

Dublin roared back with Oisin O'Rorke hitting a brace, the first from play and the second a close in free to draw them back level. Captain Paddy Purcell edged Laois after a great run, and then the roof nearly lifted off the stand in O'Moore Park when Aaron Dunphy rattled the Dublin net with ten minutes played.

Willie Dunphy did the hard graft by cutting along the end-line and getting his shot away, but Aaron Dunphy was on hand to bat home the rebound for the opening goal of the day. Kavanagh sent over his second free of the day soon after as Laois pulled five points clear.

Oisin O'Rorke pulled one back for the Dubs, but Laois kept pushing forward and extended their lead further with Willie Dunphy and Kavanagh (free) keeping Eddie Brennan's side in front.

Cian Boland and Kavanagh exchanged score, but then Dublin hit three in quick succession through Ronan Hayes (2) and Eamon Dillon to close the gap to leave just a goal separating the sides.

Laois restored their five point cushion with Kavanagh (free) and Ross King's first, but Dublin replied with O'Rorke's fourth of the half on the 30 minute mark. Laois rattled off three in the final minutes before the break through Kavanagh, Jack Kelly and a booming score from Cha Dwyer.

Dublin reduced the margin before the interval with Danny Sutcliffe and Conal Keaney firing over to close the gap to five as the sides went in at the break, 1-12 to 0-10.

Dublin came out after the restart and hit the first three points of the half through Cian Boland (2) and O'Rorke, before Laois settled with a point from Willie Dunphy. Aaron Dunphy's effort and a monster free from Kavanagh were returned by O'Rorke (3) and Sutcliffe to draw them back level with fifteen minutes to go.

Sutcliffe almost had a goal too had it not been for a spectacular save from Rowland.

Laois continued to hit the target with Willie Dunphy, Kavanagh (free), Aaron Dunphy and Enda Rowland (free) leaving a goal between the sides. Both sides went for it the final minutes with O'Rorke (2) and substitute Paul Ryan pulling back points for Mattie Kenny's side, but Laois had enough in the tank with Willie Dunphy, Kavanagh and a monster free from Rowland ensuring Laois progress to the All-Ireland quarter-final stage.